Not Just a Game

My relationship with soccer is complicated.

Friday Playlist: Be Your Own Hero 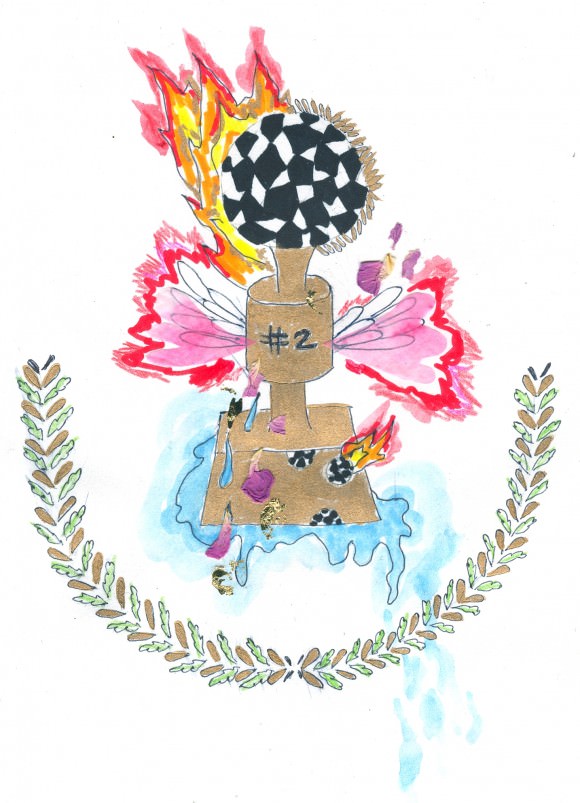 My first soccer team was called the Senators. The name sounds capable enough, but we were the puniest, least-skilled bunch of eight-year-olds in the league. As the season wore on, and my mom started forcing me to wear turtlenecks under my jersey, we hadn’t won a game. We hadn’t even scored a goal, but I wasn’t particularly upset about our losing streak. Soccer was the first sport I’d ever played, and those fall days were pure fun.

During our last game, something miraculous happened: I managed to pull the ball away from the swarm of tiny limbs pushing it down the field. My heart leapt, but I told myself to focus: Don’t mess this up. I could hear the parents in the stands on both sides of me roaring as I reached the goal. NOW! I yelled inside my head, and then I let it rip. I stood in shock as my teammates cheered. It was our first goal—ever! Later in the game, I found myself alone with the ball again and kicked it through the other team’s net for another point. The referee blew the whistle, my teammates cheered, and it hit me: We won.

For the first time, I experienced the tired, satisfied feeling that came with giving my all to a sport and having it pay off. I also got the tiniest taste of what it could be like to be really good at one. Soccer demands a lot from its players—you’re running sprints and long distances with a ball between your feet for as long as 90 minutes. You’re also one of eleven people on the pitch, which means you have to battle for each play. It clicked with my determined streak—I knew I could work harder than almost anyone else, so I did.

As a high school freshman, I made my school’s varsity soccer team. That season, I was the only ninth grader to get serious playing time, and like that day in the peewee league, I couldn’t have been happier. I’m not a natural athlete, but I ran through drill after drill at home with my dad to work my way up from my middle school’s B team (like grades, our skills were considered to be a level below the A team’s) to a coveted place as a freshman among juniors and seniors who were bigger, faster, and more experienced players.

But as soon as I finally felt like I was really crushing it, the game got difficult in ways I couldn’t practice my way out of. On the varsity team, I wasn’t playing with my friends anymore, and as a lower classman, I was low on the social scale. I constantly felt like I had to prove myself worthy of the older girls’ time and acknowledgment. Freshmen were delegated the worst tasks—carrying the ten-gallon water jug and picking up equipment—and other than that, pretty much ignored. And our coach was an ex-pro player who cursed out the referees—and us. When we lost a game, he made us run miles of punishment laps around the practice field.

These changes cracked my confidence, and I went from being a reliably good player to…kind of a mess. I was so nervous that every time the coach gave me a few minutes on the field, I screwed up a pass or missed the ball completely. I wanted so badly to be good that it was making me awful.

My teammates, who were fighting to stay on the varsity squad, noticed I wasn’t performing well and stopped giving me chances. They didn’t pass me the ball anymore, and because we weren’t pals to begin with, they didn’t offer me any encouragement, either. My coach, fed up with my poor performance, was giving me fewer and fewer minutes on the field. I felt like everyone had given up on me. So I gave up on myself, and played half-heartedly, my mind somewhere far from the game. The sport I loved to play and worked so hard to master was now something that gave me anxiety on and off the field. More often than not, I burst into frustrated tears when I got home from practice or a match.

By my senior year, I felt like I’d dug myself into a hole, and the grit that had helped me practice harder than anyone else wasn’t pulling me out of it. I still ran drills with my dad, who noticed that it wasn’t helping—it was only stressing me out more. I was stunned when he told me he thought I should quit: “It’s better than making yourself this miserable over a sport.” Hearing that was devastating. But instead of realizing that I maybe needed a break, I dug my heels in.

I thought of all those years when I was playing really solidly, and through entire games. I had something to prove—that I wasn’t a disappointment to myself or anyone else. So instead of throwing in the towel, I decided to try for a spot on the soccer team at a Division III college I was attending that fall. In a different place, with a new set of teammates and coaches, I could leave my anxieties behind—right?

I made the team, but the summer before practice started, I didn’t do any training. I was afraid to face how “good” or “bad” I was would be that fall, and dealt with it by ignoring the fact that August, and pre-season practice, was approaching. I spent the weeks leading up to it on the beach, or hanging out with my friends.

I remember going into that first practice thinking I would just wing it. But it started with a timed two-mile run, and I came in dead last. I didn’t come close to beating the minimum time the coach had set for us, either, which meant I’d have to do it again. All the puppy-dog levels of joy I felt when I first started playing soccer had transformed into a weight that I just couldn’t carry anymore.

The next day, I knocked on the door of my coach’s office, sat down in the seat facing him, and told him I quit.

After I told my teammates I wasn’t going to play that fall, I walked home feeling intense embarrassment and regret. The sport I loved and had once excelled in eventually had a way of making me feel vulnerable, and sometimes worthless. I’d cared SO MUCH about what my coach and teammates thought of me, and whether I was performing well, that I ended up psyching myself out. The second I realized I could leave ALL of that behind, I felt an overwhelming sense of relief.

For a while I didn’t touch a ball. Even watching a game on TV with my dad made me feel sad about what I’d given up and the reasons why. About a year later, some of my friends who’d been playing pickup soccer together finally talked me into joining them. I told myself not to dwell on what anyone thought of my passing or footwork—though I admit it felt good when a couple people noticed I had skills and stopped to tell me so. I thanked them, ran the ball down the field, and remembered what it was like to play just for fun. ♦