The internet is amazing, but there’s a whole wide world beyond it.

All the Right Moves 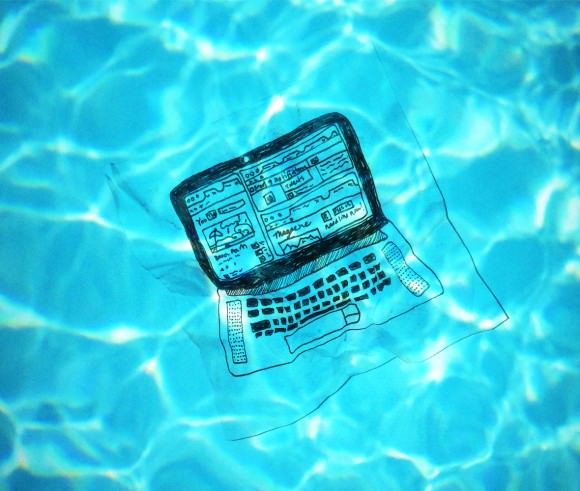 Ironically, it’s only on the internet that you, like 24,000 strangers before you, can watch the following perfect, fan-made video collage for the Le Tigre song “Get Off the Internet.” It features clips from The Simpsons; Girl, Interrupted, and Lady Gaga videos, with a healthy sprinkling of LOLCats. It’s basically Tumblr in music video form.

After replaying this thing twice (OK, or three times…OK, four), you might wonder, But, Le Tigre, whyyyyyy would I want to get off this magic online carpet ride? The internet has everything. And so, so much of it.

But, as I’ve learned, spending too much time on even the best parts of the internet can be a bit destructive, or at least numbing, though. All the time I’m spending with video collages set to Le Tigre songs, photo essays of Cara Delevigne goofing around, or blog posts about Mad Men conspiracy theories is time I’m not spending having new experiences of my own.

My name is Joe, and I’m not not an internet-aholic. It’s OK, it’s for work—mostly. I write and edit a news website, and to find things to write about, I’m basically required to read and watch things online all day, checking Twitter from when I wake up until I go to bed, while simultaneously blogging, tracking Facebook, emailing ideas (and animal pictures) back and forth with a dozen friends and co-workers, and skimming tons of other sites to know what my internet peers expect me to OMG LOVE, get outraged at, or #BAN or #CANCEL on any given day. When I’m done with my official work hours, I have time to check my favorite music blogs, Tumblrs, and Instagrams, because what did Kylie wear to Kim’s wedding? It’s a full-time job and a full-time hobby. Maybe you know the feeling.

How did this happen? As a kid, I dreamed that one day I would spend all my time goofing around on the internet for money. In third grade, in the late ’90s, I made a recommendation to my school’s computer teacher about investing in fast DSL internet for the computer lab instead of the room’s sluggish dial-up. “We have it at home,” I said. “It’s so worth it.” My teacher was not amused. At the ripe old age of eight, I was already internet-spoiled and -obsessed.

A few years later, when I was in sixth grade, the “family” desktop computer found its way from the family room to my bedroom, since I used it more than anyone else and “needed it for homework.” How else was I going to stay up all night memorizing Outkast lyrics—the discovery that they were all online was amazing—and studying the full range of the naked people on the internet? (It’s endless, yay/ew.) On message boards, I researched music and how to talk to girls, and then told my friends about it all on AIM…until like 3 AM.

In college, I started a Blogspot to write about music, and, earnest and overwritten as it was, that blog eventually helped me land an internship at SPIN. In the magazine’s Midtown office, surrounded by blown-up versions of my favorite covers, I sat at a computer all day, talking to my bosses over chat. And every once in a while, when I wasn’t too busy entering album release dates into the editorial calendar or transcribing other people’s interviews, I got to write music news posts for the website. This was the future. This was my future! I couldn’t get enough.

I’ve spent a good portion of my life tied to the internet’s constantly expanding stream of information, but, recently, I’ve begun to feel burned out by social media arguments and the negativity in comment threads. As much joy as the internet brings me, after five years straight of 9-to-5 computer time, it’s also become a huge source of stress and social anxiety. I think about the comedian Chelsea Peretti’s tweet about Twitter (haha, I know) every single day:

It feels especially resonant when I’m just so sick of hearing everyone’s thoughts on every little thing that I’m left unable to even imagine sharing my own ideas on the latest controversial song lyric or TV episode or whatever. The avalanche of opinions and arcane personal details can leave me feeling alienated from and bitter about anyone who’s not.

Last year, my internet anxiety had hit a peak. I found myself refreshing Twitter and Instagram 80 times an hour, and I felt like that poor french bulldog on YouTube who can’t roll over, rocking back and forth in place while someone else watches me and laughs.

Then I remembered that puppies are real and you can actually touch them. I used the internet’s unbeatable search functions to find an animal shelter that allows volunteers to walk the dogs housed there. As I strolled around the waterfront with Zeus, a 78-pound mutt, I felt suddenly lighter. It’s hard to care what mean commenters think when you’re watching a furry tail wag.

Now, I make an effort to avoid the internet’s cycle of negativity by limiting my social media presence as best I can, hoping no one ever gets sick of my ideas and experiences. I regulate how much time I spend in front of a monitor by always keeping an eye on the clock, or, when my self-control is lacking, with apps like Freedom. When I feel internet fatigue coming on, I go outside to research a story, play softball, show off a new sweatshirt, hug my friends, or dance. Sometimes, I don’t even bring my cellphone. (But most of the time I do.) Seeing someone face-to-face, instead of just staring at their avatar, can remind me how funny they are when they’ve got more than 140 characters to work with, and that people are more than just their social media accounts, even if they have good ones. Being “liked” online by a big group of people, most of them strangers, is both harder to maintain and less satisfying than being just plain liked by people I know, and whom I don’t have to constantly prove myself to. Follower counts become meaningless in the flesh. And things that seem so major on a screen, like toxic comment threads, basically cease to exist as soon as I step away.

You can—and should—let go when online living starts to be too much. You can get started by checking out Pixie’s great piece on dealing with internet burnout. And the next time you feel yourself getting sucked into the quicksand of blog posts, Twitter wars, and Tumblr likes, make it all disappear, at least temporarily, by rollerblading down a hill, dribbling a basketball alone on the sidewalk, sitting on your stoop and staring off into space. You don’t even have to go outside! As I learned by walking Zeus, a cool thing about the internet is that it’s full of ideas about how to get offline. (Rookie happens to have plenty of these for you: See here, here, and here.)

On the internet, controversies, hot topics, and large-scale conversations come and go. Someone will always be articulating the exact thing you wanted to say, and someone else will always be wrong, whether you’re there to correct them or not. You can read it all when you get back. Or you can not! In a race that no one can win, it feels really good to occasionally just stopping running. Now, if you’ll excuse me, I have to go pet a dog. ♦