Celebrating spring with the Radical Faeries. 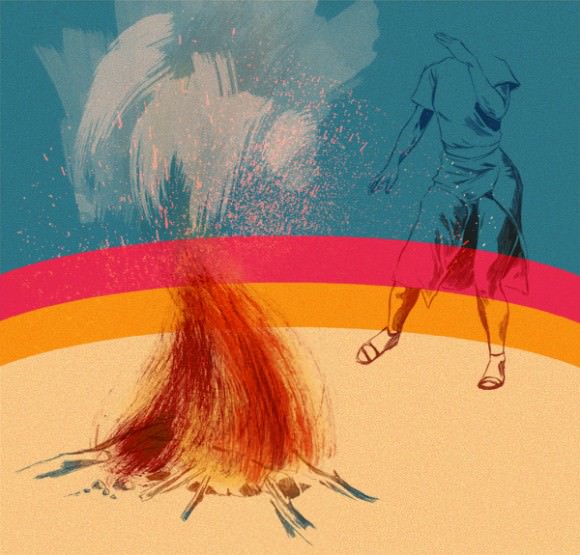 On May Day, we drank mushroom tea. Then we tied ribbons (actually bed linens knotted together) to the trunk of a a very tall Douglas fir and danced around it to celebrate Beltane, the Gaelic May Day festival. At night, we lit bonfires and performed witchy rituals where we burned what we wanted to leave behind (jealousy, body issues, shyness) and added our blessings to the flame in the form of prayers and songs.

We were at a Radical Faerie commune in the woods (that’s all I’ll say with regard to its location: faerie sanctuaries are best kept hidden) where Beltane is celebrated for an entire week. Some friends who went to the last Beltane Gathering told me it was the best party of the year, and it wasn’t too far from where Nigh and I have been staying, so why not? It ended up being an amazing, magical experience that taught me a lot about desire, ritual, and self-acceptance, lessons that I’ll do my best to share with you.

An important caveat before I continue: I couldn’t have done any of this had I not been in a safe space. The commune has strict rules about respecting people’s boundaries and limits, and everything that happened was 100 percent consensual: We touched each other in all sorts of ways, but never without asking/giving permission first.

Here are some of the things I learned at the Beltane Gathering:
Ritual is a tool that can help you overcome any heady feelings you might be stuck on.

On Walpurgis Night (the eve of May Day), we had a banishing ceremony, where you rid yourself of that which is holding you back. We burned down last year’s maypole in a bonfire that lasted through the night. Everyone was encouraged to bring mementos (like old diary entries) that represented what they wished to cast off (like jealousy, anxiety, fear). There was a drum circle—with those deep primordial dum dum dums and witchy voices ringing holily holily holily—and one by one, we stood up and explained what we were burning away (e.g., “I am throwing my jealousy into the fire”).

In the past, I’ve stewed in every bad feeling and identified with each shitty emotion as it came (“Anna is an anxious person”). I had a hard time remembering that all feelings, good and bad and neutral, pass, and that I, an individual who lives in a constant state of becoming, have the will to control how I will react to any given emotion. So it was super empowering to visualize bad feelings as something I could literally throw into a fire and be done with. I threw away a feeling and I haven’t felt it since. I believe the magic worked.*
Getting naked feels good.

Everyone at the Gathering went around totally naked or topless or in itsy-bitsy thongs or dominatrix getups. I’ve never seen so much genitalia—just prowling around, hanging out—in my life. When I first arrived, I felt hella shy and square in my shirt-skirt combo, but as the days wore on, I peeled off more and more, until I was walking around topless, with a painted face, ripped-up fishnets, and green short-shorts (still a modest getup, relatively speaking). The first time I took off my shirt, I felt nervous—I was insecure about my body—but I quickly got over it, and I started to love feeling the sun’s warmth on my bare skin. I forget all about boring things like the size of my waist and the flub on my belly and began to just appreciate my body for being strong and healthy. I focused on how my body felt, not how it looked. (And I swear, concerning yourself with how your body feels, inside and outside, is far more gratifying and soul-nourishing and empowering than focusing on how it looks.) Getting naked, in other words, got me out of my head and in touch with myself.
So does touching people.

There was a witch at the Gathering—I’ll call them Artemesia—who teaches “aphrodisiacal education” workshops in a nearby city. Artemesia had a very powerful aura around them. I had heard they were very powerful when it came to matters of love.

Artemisia told us that when lovers begin to quarrel, they should both stop talking, cup each other’s faces in their hands, and, no matter how pissed off they believe they are, spend one full minute staring silently into each other’s eyes and caressing each other’s faces. Artemesia wants to start a fuck-or-fight clinic, and believes that most problems can be fixed by fucking: just less words, please, there are enough words already floating around in the universe.

My partner, Nigh, and I hadn’t been having sex for a while. We’re a happy couple, but we’re two hard-headed individuals who share everything, so we bicker. But here we were, surrounded by naked bodies, taking part in morning and evening rituals where everyone was encouraged to connect, to play, to let the land grow fertile and pulsate with our shaking loud gyrating bodies. So Nigh and I began to fuck again. A lot. Five, six times a day, in the meadow, down by the shrines in the woods, in the cuddle tent, wherever. Sex is fun. All the voices in your head fall silent as pleasure rings through your body. Petty squabbles feel pointless.
Chaos can be beautiful.

I made that May Day ceremony, where we danced around the beribboned maypole, sound a lot more orderly than it was. How it really happened was that we had the Tea Ceremony and drank our hallucinogenic tea and we were ordered by this dominatrix to each take hold of a ribbon, and we were assigned a color, silver or gold, that we were supposed to remember, but the tea was starting to kick in and we were getting gigglier and gigglier and then suddenly the maypole dance was ON and we were running around the pole with our ribbons in our hands and the dominatrix was barking orders at us like “GOLD! LIFT YER RIBBONS UP! SILVE, LET ’EM DOWN! GOLD UP, SILVER DOWN! NOW YOU: UP, UP, UP!” but it was hard to hear her words while skip-running around the pole. We were supposed to be doing a specific kind of dance, and we were supposed to be weaving the ribbons in some particular order, but it was total chaos. Clumps of ribbons quickly became tangled together into a big knot, and some of us were still sprint-skipping and some of us had paused to look up at the tangled mess and wonder, Should we back up? Start over? while being pushed forward by faeries tripping over faeries. I am not someone who is usually very comfortable with chaos, and I was getting increasingly bothered. The guy next to me stopped skip-stepping and looked upset and started muttering, “What is going on? I can’t…oh no…I can’t do this. This isn’t right.” Suddenly he lunged at my ribbon and tried to untangle it from the clump and his panicked face scared me, so I took a few steps back and watched the ribbons ensnare the tree and everything was this sparkling, colorful mess, and it was beautiful.

A man with a Santa belly and a ponytail was standing back next to me, and he said, “It’s pure chaos: Nobody knows what the heck is going on, but it works. Somehow it all comes together and works. That’s magic.” He was right. Which brings me to:
Magic is real.

Before the Beltane Gathering, I never could have imagined I would become someone who did yoga naked in a meadow, or that I would jump at the chance to have sex with my boyfriend under the same circumstances. I would never have believed that my deepest anxieties could be disposed of as quickly as a page from a journal could be tossed into a fire. I didn’t know I was capable of being so comfortable with chaos. I never knew I could feel so free. ♦

* Magic rituals lose their strength when you talk too much about them, so I’m going to keep the specifics to myself.