An ex-wallflower’s tips on getting down. 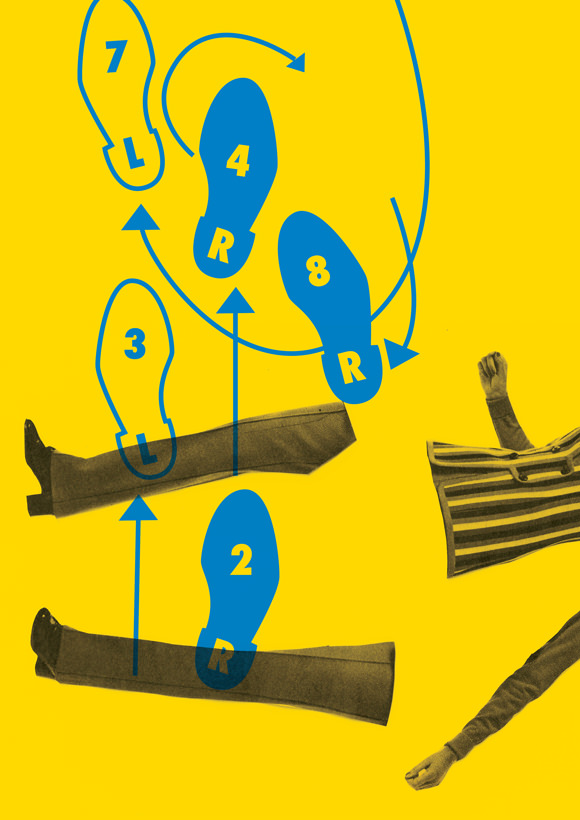 As a kid, I was a fairly gutsy person. Jump off the high dive at the public pool? Sure, let’s cannonball! Ride down the big grass hill on my bike without looking? OK, me first! Let go of the swings at the highest point in the sky? Well, all right, but I really think we should try to do somersaults before we land!

But something happened when I hit puberty: Scary things started to seem scary. I lost my bravado and began to live in the shadowlands of fear, a place I haven’t left since. But of all the spooky-scary things in the world (of which there are so many), there are three things that are most powerful, most capable of frightening me senseless and sending me into a blind panic. Those three things are words, said in this order (imagine I am saying this with a flashlight under my face):

OH MY GOD, NOOOOOOOOOOO!!!! You guys, I…I…I cannot dance. At all. I am a terrible, extremely self-conscious dancer, and I’m not exaggerating or being humble. I’m so bad that I once turned down a first date with a girl I’d had a crush on for months, just because she’d asked me to go dancing with her and her friends. If she sees me dance, I thought, it’ll be alllllll over.

I mean, what are you supposed to do with your arms? What do your feet do? How do you move your arms and feet in different cool ways at the same time? How do you know when to stop doing one motion and start doing another one? Why doesn’t anyone else seem to have a problem with any of this??? And let’s not even talk about grinding—I can never figure out how to sync up my rhythm the other person’s and when I try to “get low,” I just lose my balance.

I realized dancing was a problem for me at my first formal: Bay View Middle School’s eighth grade dance. My friends and I excitedly put on our sparkly, spaghetti-strapped dresses and our platform Mary Janes, snapped glittery barrettes into our hair, and applied lots of lip gloss (uh, this was the early 2000s—we looked cool, OK?). As we entered the cafeteria around 9 PM, we gasped—everything looked so magical! All the tables had been removed, and streamers twisted across the ceiling. There was even a disco ball throwing flecks of light onto the floor, plus a DJ. It was just like in a movie…except that the boys stayed by the food all night, while the girls took over the dance floor, dancing with each other in tight circles.

There were fast songs, where all my friends moved their feet in ways I couldn’t copy, and slow songs, where my friends ground on each other sexily as I looked on, mystified. How did all my friends know how to dance to all these songs, when each one was so different? I suddenly became really aware of my arms and legs.

“Tubthumping” by Chumbawumba came on, and everyone cheered and started jumping up and down, in unison. I didn’t quite know what to do besides sway. When I went home that night, I dejectedly told my mom what happened, and she laughed and told me that I shouldn’t worry, and that things would get a lot better as I got older.

Things did not get better. In fact, they got worse: My friends continued to improve their dancing-in-public skills throughout high school, and I just felt more and more awkward. The worst part was, I actually really wanted to dance! But I was pretty sure that everyone would watch me and judge me for being bad at it!

My self-consciousness eventually took over, and I simply stopped trying. When my friends wanted to go to high school or college dances, I’d go along, but I’d hang out at a table or against the wall, trying to look relaxed and jaded, like someone who was just too cool to dance, you know? If I was feeling especially wild, I would go out on the dance floor and continue to stand there as my friends danced, smiling a fake smile and pretending I was having fun.

I was never having fun. Not once.

But dancing was not going away! It seemed like the only thing my friends wanted to do on Friday and Saturday nights. Then one day, in my mid-20s, as I stood on the dance floor of a crowded club for what felt like the thousandth time, smiling tightly and getting bumped and jostled by everyone’s butts, I suddenly decided I’d had enough. I’d wasted enough time, and I was tired of thinking about how I looked to other people. Dancing really did look fun! I just needed to get the hell over myself.

Beyoncé’s “Single Ladies” was on. I love that song, and it was so crowded that maybe no one would even see me. Looking around furtively, I raised my arms into the air and ever-so-gently swiveled my hips. No one noticed. I repeated the motion, and my friend came over and yelled, “HEY! YOU’RE DANCING!” over the music.

I kept swiveling my hips and said, “I KNOW, RIGHT?! NOW WHAT?”

“JUST KEEP DOING THAT! YOU LOOK GREAT,” she hollered back before hopping away.

So I just kept doing that: With a stupid grin on my face, I waved my arms in the air and moved my butt in a big circle. No one laughed or even seemed to notice. For the first time in my history of going out dancing, I actually had a good time.

My loves, if you feel like you’re not very good at getting down, I want to help spare you those self-conscious feelings and encourage you to have a great time on the dance floor! It took me several years, but I stand before you today able to get up and dance, in public, without being paralyzed by shame. I’ve learned there are a few things you can do, and tips to remember, to help yourself, and I’m happy to share them with you today! LET’S BOOGIE.

Turn on loud music in your room, look in the mirror, and try…

If you practice these moves for a while, you’ll get used to feeling your body moving to music. As you get better, you’ll be able to test out new things you see your friends do, or that you think of on the spot, ON THE DANCE FLOOR.

My girlfriend Jen invariably looks cool dancing. When I asked her how she would teach someone to dance, she said, “Different parts of songs can inspire you to move different body parts. Like, your feet can go with the drums, your hips can go with the bass, and your arms can go with melody, especially vocals. Move each body part to the way its corresponding part of the song sounds, and you’re dancing!”

If that sounds complicated, she also suggests always using your head and hair as a dance prop. “Shake your hair in your face and bob your head like a maniac.” Here’s a photo of me doing that very thing recently, and loving it: 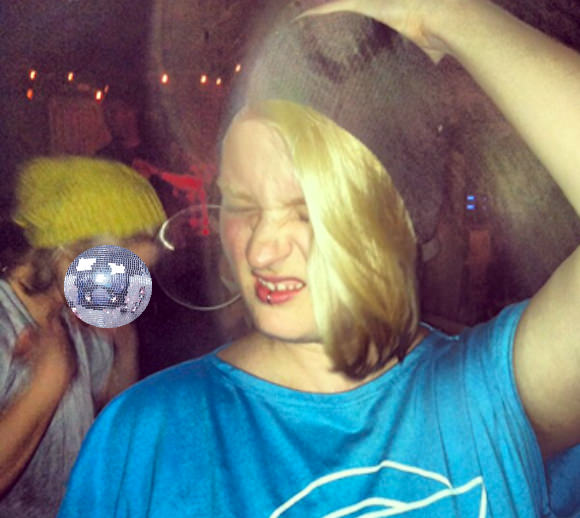 Disco ball to protect my fellow citizens of the RHYTHM NATION.

If you have a friend that you think is a good dancer, pull them aside sometime and tell them exactly what is up. Explain that you feel ridiculous when you dance, and ask them if they wouldn’t mind dancing with you a little bit the next time you’re out together. (Friends usually do not mind this.) Even better, ask them to show you some actual moves, to actual songs you both like, at your house, in private. Bedroom dance partis can be totally fun and get hilarious really quickly.

Play dance music at your house when you’re getting ready to go out, and dance around really goofily until you’re doing it without even thinking. That way, getting down in public will feel like an extension of what you’ve already been up to for hours. It’s just a natural continuation of your evening!

PRO TIP: This is one of the best “getting ready for going dancing” videos on the planet:

You know what? Just learn that entire dance by heart and do it every single time you go out. JKJKJK—I’ve been trying to memorize this dance for three years, and no luck. (But maybe you’ll do better?)

OUT ON THE FLOOR

Don’t be like me, standing still and talking on the dance floor—move! If you’re nervous at first, just step from side to side over and over again, to the beat—that’s waaaaay more fun than pretending you’re too busy talking to dance. Then you can segue into the basics I broke down above!

And, if all else fails, just do this: 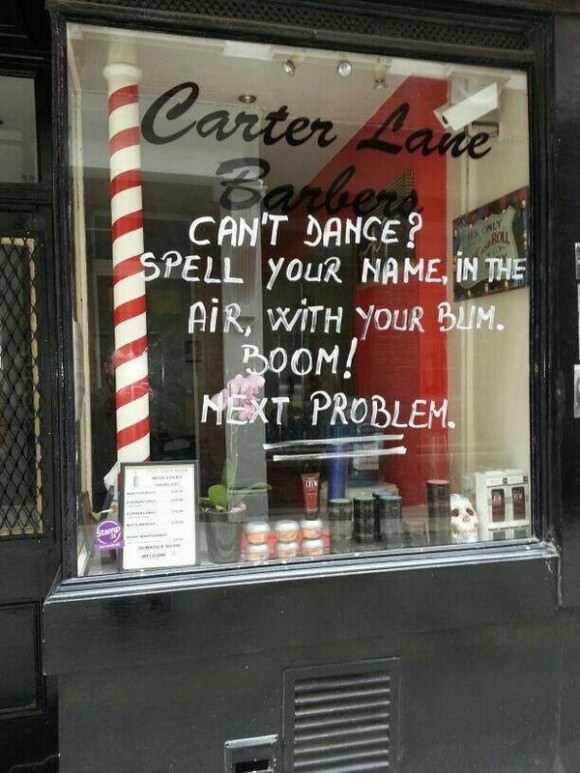 Sage wisdom from the window of Carterlane Barbers.

I tried it last week. It actually works.

If you still feel dumb, dance only when the dance floor is packed. That way, you’ll be just one more person in a crowd, and feel less like you’re standing out. Plus, no one will be able to see your feet!

Do the Lawn Mower, where you pretend you’re pushing an invisible lawn mower. Or try the Sprinkler, where you put one arm behind your head and move your other arm forward like an automatic sprinkler. My friend Sarah’s entire style of dancing is “bad dancing,” on purpose. She just focuses on trying to make herself and other people laugh. And guess what? She usually ends up having a great night. That’s because when Sarah’s around, everyone dances, since it’s not possible to dance “worse” than “that weirdo” out on the floor. She lowers the bar on purpose! Obviously, she is my favorite person to bring dancing, btw.

My friend Shelby is also a great dancer, and when I asked her if she had any tips for people who might feel self-conscious about dancing in public, she said, “Don’t try to look cool—everyone who just tries to have fun ends up looking way radder than everyone else.”

Jen chimed in with, “Don’t worry too much. Except for like maybe two people in the room, no one is a ‘good’ dancer. Just go for it. People are more intimidated by confidence than they are by actual choreographic ability.” 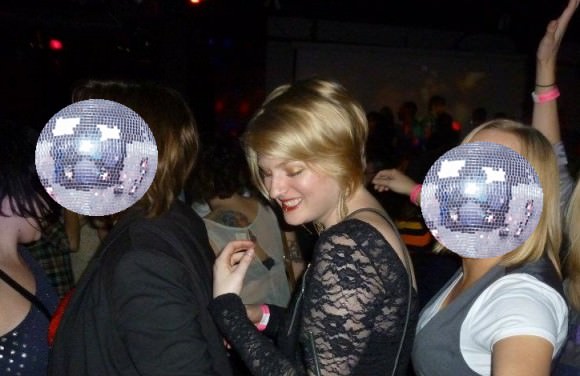 Me, center, plus two disco balls with whom I happened to be in a conga line recently.

You might feel scrutinized on the dance floor, but you are your own worst critic. No one is watching you closely enough to know if you’re doing the same basic moves over and over again. They’re all busy making sure they have their limbs under control, just like you! So you got this, BB. Now let’s dance! ♦