I Melt With You

Scenes from an ice cream stand. 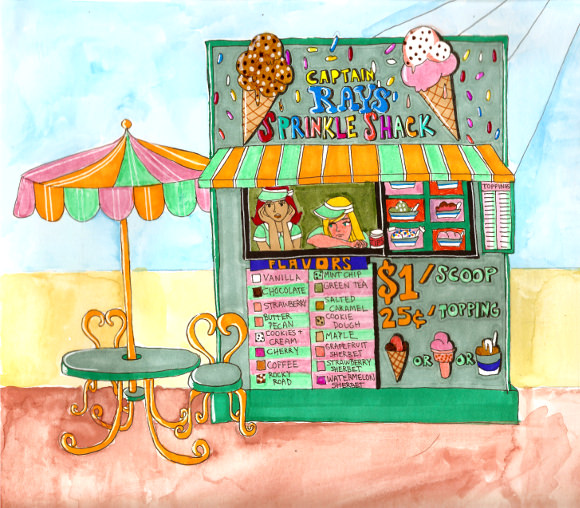 “It’s kind of making me hate ice cream,” I say, shocked that my mouth is capable of forming such blasphemous words.

We’re three hours into a Saturday-night shift at Captain Ray’s Sprinkle Shack, and we’ve finally hit a lull after being bombarded by a solid rush of ice cream–hungry tourists. It’s 95 degrees outside, with a humidity factor of roughly 9,000 percent. Because our air conditioner is from 1975, we’ve taken to sticking our faces inside the refrigerated cases in order to cool down. My shirt is smeared with whipped cream and fudge, and I’m pretty sure I have butterscotch in my hair. It’s a very glamorous way to make eight bucks an hour.

The Sprinkle Shack is, in fact, a shack—Brewster and I spend our shifts standing in a tiny little room behind a glass partition that’s covered in pictures of sundaes (in case martians stop by and can’t tell what we sell, I guess?) and dole out cones and cups to hundreds of people over the course of six hours. When it’s busy, which it usually is, we turn into ice cream–serving robots, capable of knocking out sundaes at an alarmingly efficient rate. We can hook up an entire little-league team with banana splits in under 10 minutes. It’s really quite impressive.

It’s the lulls that are tricky. Brewster and I have little in common besides our love of marshmallow topping and our aversion to sherbet (or “fake-ass ice cream,” as she calls it). When the lines clear and it’s just the two of us staring out at the turnpike and swatting away mosquitoes, I start scanning the roads for SUVs, school buses, minivans—anything that suggests the possibility of a crowd that’ll keep us busy enough to not have to make conversation. You’d think I’d be prepared for the downtimes by now—it’s pretty standard that we hit a wall at 8:15 PM and then things are dead until 9:30-ish, after the 7:30 movies get out—but it’s been two solid months of working the Wednesday-night shift with Brewster, and we still don’t seem to have much to talk about that isn’t directly related to ice cream.

We’ve had a few classes together at school, and we’ve always been cordial, but something seems to take control of Brewster when she’s at the Shack. It’s as if her normal persona—laid-back, dreamy—fades away and she turns into a business robot, going through the motions like she’s been programmed to do them since birth, which, in a sense, she has.

Oster Bay is the kind of town that people forget about in the winter. It’s like the rest of the world thinks it’s some magical land built of miniature golf courses and stores selling seashell necklaces that exists only between May and September. Brewster’s family has been here since like Pilgrim times, if that’s an era. Her last name, Hopkins, is plastered all over Oster Bay, on street signs, memorial gazebos, and various stores and restaurants opened by her relatives over the 300-something years that this place has existed. There are maybe six or seven families like that in Oster Bay—the “important families” who maintain their power by simply sticking around as long as they can. My mother calls them “stalwarts of the community.” My older brother, Evan, calls them “fucking townies.” I guess it’s a matter of perception.

Families like mine, who’ve lived here for only 10 years, or, god forbid, even less, are called “washashores,” just because we haven’t been here since the dawn of time. We could live here for another 300 years, and we’d still be the new kids. I don’t really care, but I think my mother does. She’s joined every local committee that will take her, and she prides herself on her volunteer work around town, as if it will make her an honorary townie—excuse me, “stalwart of the community.” She was thrilled when I got the job at the Sprinkle Shack.

“It’s a local institution!” she said.

“You take the romance out of everything,” she said.

I try to see the “romance” in the Shack, but all I can see are tiny flies buzzing around the maraschino cherries and beads of sweat forming on Brewster’s forehead as she cleans the machinery.

There are basically three options for summer employment when you’re a 16-year-old in Oster Bay: ice cream scooper, lifeguard, or waitress in a fried-clam joint. I’m allergic to clams and afraid of sharks, so I ended up at the Shack. Such is fate.

Brewster ended up at the Shack because her grandfather is the real Captain Ray, who technically “retired” 10 years ago but still shows up at least three times a week to check on things. Brewster’s parents run the place, and as the Hopkinses have a reputation for sticking around, there’s kind of an unspoken assumption that she’s going to take the Shack over someday. She doesn’t seem too stoked about this idea. I once heard a regular say something to her about “being the big boss” in the future, and I swear, the look she gave him could have melted the ice cream right off his cone.

The air is heavy, and our embroidered mint green polo shirts are sticking to our backs. It’s been 10 minutes since our last customer showed up and grossed us both out by ordering a scoop of watermelon sherbet with peanut butter topping, and it feels like the night has turned into a spoonful of butterscotch: thick and warm and slow.

I try to pass the time by organizing the toppings in alphabetical order: almonds, bananas, cherries, etc. Brewster just stands at the window, her palms on the counter, her eyes on the Oster Oyster House across the street.

“That place has been open for 75 years,” she says, keeping her eyes on the street.

“My older sister had her baby shower there five years ago,” I offer. It’s a dumb family factoid, but at least it’s something.

“That’s cute,” she says, smiling. Her voice is dreamy and far away.

“My mom thinks it’s romantic that I work here,” I say.

I nod and start refilling a plastic dish of rainbow sprinkles. “She says it must be filled with great memories, or something. She’s kind of nuts.”

“Yeah, well, memories are kind of a thing around here. This whole town pretty much runs on nostalgia.”

She laughs. “Those too.” A customer approaches and asks for a maple-walnut cone, which Brewster dispenses with remarkable proficiency. “That was my millionth cone,” she says.

“Really?” I am way too impressed by this. I think about the kinds of small-scale accomplishments that come from staying in one place forever.

“No, dummy,” she says, laughing. “It feels like it, though.” She looks at the clock behind me on the wall. “Almost 9:30,” she says. “Better refill the napkins.” She disappears into our tiny stock room, leaving me alone to watch the window. I count the cars as they pass by and notice they all have out-of-state plates. They’re temporary residents of our reality. I wonder if either of us will ever become out-of-state–plates people—escapees from a town designed to settle you down before you even get a chance to stand up.

A few cars put their blinkers on, signaling an onslaught of customers. I take a deep breath, inhaling the salty ocean air and the smell of waffle cones before the madness begins. Just as the first family eagerly makes their way to the counter, Brewster reappears from the stock room, napkins in hand, ready for the people who have kept her family in business for centuries—the fun-seeking transients who get to leave when the sun grows cold. ♦