I Melt With You 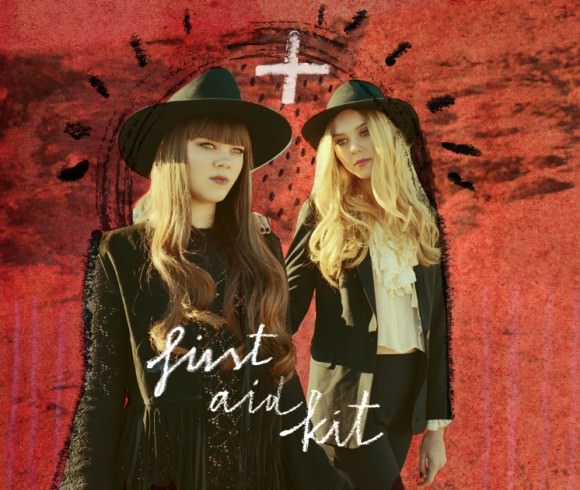 Collage of Johanna (right) and Klara Söderberg by Marjainez, using a photo by Neil Krug. Illustrations below by Marjainez.

First Aid Kit’s new album, Stay Gold, came out this month, and you know what? Johanna and Klara Söderberg’s voices sound stronger, clearer, and more harmonious than ever. The record is full of big, beautiful tunes that you’re going to want in your headphones any time you feel the need to ramble around this summer. The sisters are touring the world for the next few months, and they told us about some things they’ll be bringing with them.

1. The Marxophone. johanna: It’s an instrument that’s like a mandolin and a guitar and a zither and a hammered dulcimer all in one. Mike Mogis, the producer of our new record, had one in the studio in Omaha, Nebraska, where we recorded our album, and we just fell in love with it. They don’t make them anymore, so they’re really rare and cool. They’re pretty easy to play, too—you play the melody strings with one hand, and with the other hand you play chords. klara: You can hear it on our song “Master Pretender.” It makes this creepy, weird sound that’s also beautiful and super folk-y.

2. GeoGuessr. klara: You go on this website, and it drops you anywhere in the world on Google Street View. Then you have to guess where you are by pinning your location on a world map. You can “walk” around forever and try to find signs and stuff, or you can just guess. We’ve kind of become obsessed with it. johanna: We’ve gotten dropped in Sweden before and knew it right away like, Oh, this is Sweden. johanna and klara : [In unison, in monster voices] THIS IS SWEDEN! johanna: It’s really tricky, because you think you know what the world looks like a little bit, but you’re surprised. I was in Finland once but thought I was in Canada. It’s a very educational game.

3. Nintendo 3DS. johanna: Before we bought this, we never really played video games. Just The Sims—gotta love The Sims. On the DS, though, I’ve been playing Super Mario Bros. and the classics. We’re bringing it on tour with us. klara: It’s going to be the new tour distraction. I’m playing this game called Professor Layton, and it’s pretty awesome. There’s this big mystery, and you have to go around and talk to people, and they give you puzzles to solve. I like that it makes me feel a little smart. And it’s beautifully done. It kind of reminds of a Miyazaki film, like Spirited Away.

4. The Happiness Project. klara: This is a book by Gretchen Rubin that I bought a couple weeks ago. The author is like, I have a great family and a great job, but I’m not really happy. Why am I not happy? What can I do to make myself happier? So she does all this research about what science has found about what makes people happier. And then she says, OK, I’ll try to do this. I’ll try to follow these rules that I’ve found for a year. It’s really inspiring; it makes me think, I should do this, I should remember this. johanna: I notice when you’ve been reading it. You’re super sweet to me and asking me how my day was and hugging me and being all, “How are you? I love you.” And I’m like, “Have you been reading that book again?”

5. Sister bands. johanna: When we started making music, we never felt like, Oh, we’re sisters, that’s so special. But lately we’ve been listening to other sister duos and trios a lot. Like Kate & Anna McGarrigle—they made a self-titled record in 1975 that we’re obsessed with. And this band the Roches—they’re also sisters and have this song called “Hammond Song” that we love because it has insane harmonies. And there are recent ones, like Haim. We love Haim! And the Staves are great. There are three of them, and they’re from England. klara: We got to sing with the Staves last year, so it was five sisters singing on stage together. We’ve also been listening to the Secret Sisters and Lily & Madeleine. There are so many good sister acts right now. ♦