A star man—and a real human being. 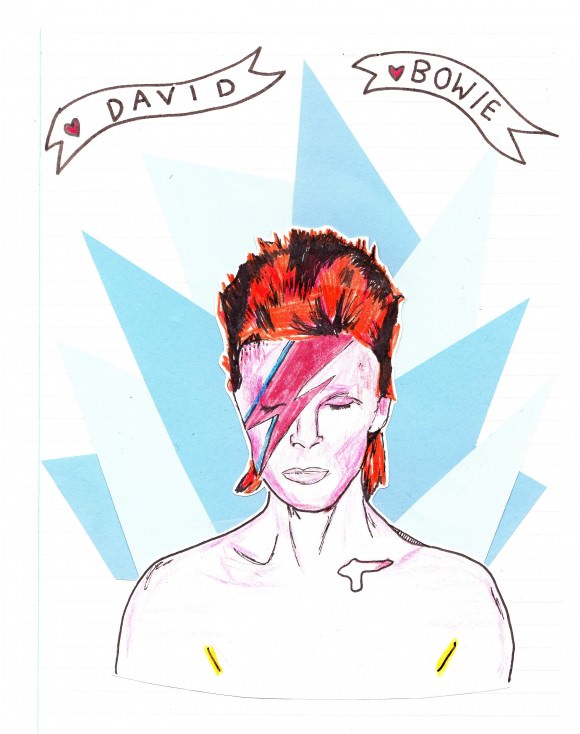 Before I saw the video for David Bowie’s single “Where Are We Now?” when it was released in January 2013, I had only been a surface-level Bowie fan. I had appreciated his music and general existence—I liked Bowie because he was Bowie, a malleable enigma of a pop star, constantly shifting to new identities and personae. But the video did something for me that no other Bowie song ever had. It made me sympathize with Bowie the person, rather than Bowie the artist, Bowie the space alien, Bowie the Ziggy Stardust.

There’s something about his face. It’s filled with sadness and stoicism, first on a puppet in front of images of Berlin, then after he appears in full-body form, watching that puppet perform in front of a projector in the city. Berlin is a hugely significant place for Bowie: For a few years in the 1970s, he locked himself in small apartment by the Berlin Wall, where he created some of his greatest work.

I was incredibly moved by the aged timbre of his voice, which almost desperately repeats the question of the song’s title—“Where are we now?”

To me, Bowie sounds displaced and uncertain—he’s so far away from his heyday in Germany, and he’s not quite sure what to do about it. The song made me realize that he wasn’t just a glamorous freak singing about outer space—he was also a real person, with his own interior life, and his own pain.

The fall following the album’s release, my university offered a course on David Bowie’s life and music. It introduced me to some of his contemporaries, like Suzi Quatro, and broadened my knowledge of others, like Lou Reed, and the glam rock icon Marc Bolan. It also gave me a deeper understanding of who Bowie had been before his fame—and the underlying motivations for his search for an identity through his extraterrestrial characters.

Like Bowie, my professor, Vivien Goldman, was British, and part of what struck me most about the course was the way she expressed a deep understanding of his life in the “dull and gray English suburbs,” as she often described them. She made his introduction to glam sound like the transition from black and white to technicolor in The Wizard of Oz.

Learning about that black and white period was the most enlightening, and utterly heartbreaking, part of my Bowie education. I had never heard about the sad truth of Bowie’s family life, nor the way his fear of mental illness drove his artistic pursuits. Schizophrenia and bipolar disorder that ran on his mother’s side of the family, and several of his aunts, uncles, and cousins were lobotomized or undergoing electroshock therapy as he was growing up, which he found terrifying, as he said in later interviews—would he go through the same things?

He found solace in his half-brother, Terry. Terry was 10 years older than Bowie, but the pair grew up in the same household, even sharing a bed when Bowie was a newborn. The elder brother’s taste for Beat poetry and jazz had a large influence on the younger one: Around the time David was in high school during the late ’50s and early ’60s, Terry introduced him to the excitement of underground London. David accompanied him to coffee bars and clubs where the local Beats would hang out, where he also heard rock ‘n’ roll for the first time. This inspired him to learn the ukulele and the saxophone, and in 1967, he released his debut self-titled album.

In July of 1969, Bowie’s breakthrough single “Space Oddity” was released for his second (and, again, self-titled) album. That same month, Terry was diagnosed with manic depression and schizophrenia like so many other members of their immediate family. Terry was subsequently institutionalized for the first time of many.

When I learned all this, I felt so much pain for David and Terry. Knowing that someone you love is suffering as you’re trying to build your own life can tear you apart: Having been the one person from my friend group in Illinois to go to New York City for college, it was heartbreaking to be far away from my friends when they had hard time and I couldn’t be there. I felt helpless, like I had to stop my entire life and go back to them, though I knew I couldn’t.

Hunky Dory included “The Bewlay Brothers,” a song about about his relationship with Terry, who was increasingly in and out of hospitals as David became even more famous. The imagery in the song is cryptic—it’s a stringing-together of memories that leads to his brother “laying upon the rocks,” far away from him.

It makes me wonder how Bowie dealt with his brother’s declining mental health at a time when his dreams were coming true. Did he feel guilty? It’s hard to know, since he spoke very little about his brother’s illness at the time. In Christopher Sandford’s book Bowie: Loving the Alien, the author summarizes the creation of characters, like the alien rocker Ziggy Stardust, for his seminal 1972 album The Rise and Fall of Ziggy Stardust and the Spiders from Mars, and Aladdin Sane (a play on the phrase “a lad, insane”) from the 1973 album of the same name, as a way for Bowie to preserve his sanity.

Sandford’s book quotes Bowie describing Terry’s institutionalization years later, in 1993: “It scared me that my own [mind] was in question. I often wondered at the time how near the line I was going … how far I should push myself.” He spent much of the early 1970s finding out: After the success of Ziggy Stardust made him a big rock ‘n’ roll star, he moved to California, where he almost lived out his fear of succumbing to insanity. During his time in Los Angeles, as our professor explained, he became addicted to drugs, got very into the occult, and basically lived off of cocaine, peppers, and milk.

In 1976, he decided to move to Berlin and rehabilitate himself. Thus came a new beginning and the “Berlin Trilogy” of albums that Bowie released in the late ’70s. First came Low. The album’s lyrics and sounds are minimal, and less theatrical than his earlier work, as on “Always Crashing in the Same Car,” a song about repeatedly making the same mistakes. It feels like the beginning of a characterless Bowie—someone willing to let you see his whole self.

Later that same year, Bowie released the album that marked the high point of his rejuvenation, Heroes. Though still minimalist, it carries something more positive within its lyrics than its predecessor. He sounds refreshed, like he’s reached a new level of comfort with his identity. On “Beauty and the Beast,” he sings, “I wanted to believe me / I wanted to be good / I wanted no distractions / Like every good boy should.” Instead of hiding behind his characters, he’s fully himself here—and fully open to discussing the sadness of his past, and the effects that it had on him.

“Heroes,” the album’s namesake, is my favorite Bowie song. It’s a beautiful ray of light that tells the tale of love shining through the darkness, sung by a brand-new Bowie. In writing it, he was surrounded by supportive and creative friends, like the producers Brian Eno and Tony Visconti, and the punk musician Iggy Pop, who created two of his own solo albums while in Germany. The group seemed to push one another creatively, and their work reflected each other’s contributions in ways that helped shine a light on their incredible talents. As Bowie’s music from that period seems to prove, it’s often our strong personal relationships that can save us from ourselves.

Nearly 40 years later, on the album The Next Day, Bowie looks back on his time in Berlin both visually and lyrically. The album’s cover is simply the image from Heroes blocked out by a white square, and “Where Are We Now?” the song that made me love him, is nostalgic for it in a way that’s mysterious and sometimes sad. Does he regret his time there? Does he regret not getting there sooner? We may never actually know the answers. and maybe that’s best. Some elements of our journeys to finding ourselves should be owned exclusively by us.

But what’s so cool about Bowie is that, in using art and music to express the fear and pain that came from his personal troubles with his family and addiction, he gave people new tools for their own self-discovery. He pushed buttons when it came to gender roles, performance art, and music, and his characters opened up new spaces for aliens just like him—kids that wanted to have bright hair, rebel, and blur the lines between “boy” and “girl.”

Learning about Bowie has deepened my personal connection to his music. I can identify with his search for something real within himself, even as he hid behind different expressions of that self in his characters’ outward appearances. Sometimes it seems easier to hide behind a mask. But, though it’s fun and important to explore our identities, and all the ways they can shift and change, allowing yourself to be you can often be the strongest journey we can embark on. Knowing the stories behind songs like “The Bewlay Brothers” makes them more painful to hear, but it’s cathartic to know that this alien is just as human as we are. For decades, David Bowie has used his art to cope with his pain and explore himself, then shared it with the world—and with many people who see themselves in it in a way they never had before. That’s why, whether he’s playing a wild character or just singing as his stripped-down self, he’ll always be a hero to me. ♦