A song premiere and a conversation about crossing borders, writing songs, and making the world a better place.

Literally the Best Thing Ever: The Madonna Inn 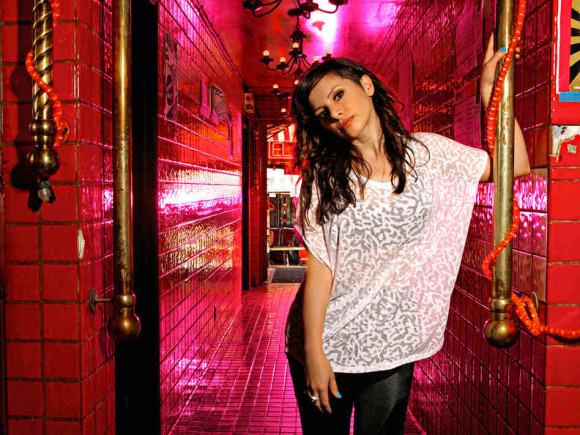 When Ceci Bastida was a music-obsessed 15-years-old growing up in Tijuana, she joined Tijuana No!, a punk/reggae/ska band known as much for its confrontational lyrics about immigration, poverty, and government negligence as for its raw, charging anthems. When one of the band’s members, the singer/producer Julieta Venegas, broke off to develop a solo career, Ceci followed her, and spent a decade as Julieta’s backup singer.

Ceci finally embarked on her own solo career in 2010, and her first album, Veo La Marea, was nominated for a Latin Grammy. Her new album, La Edad de la Violencia, comes out tomorrow. We’re pleased as hell to give you a sneak peek of it today with this track, “Ven (Beautiful),” which features Ceci’s old bandmate Julieta Venegas:

I recently got to talk to Ceci about the making of this album and what it was like to grow up in a border town.

MARTY PRECIADO: Was it an interest in music or in politics that inspired you, at the age of 15, to join Tijuana No!?

CECI BASTIDA: My first interest was the music. I had been playing classical piano for several years, and when I met the guys from the band, it seemed like it would be fun to play with other people and start writing music. All of that was completely new to me. I was very young; my bandmates were between five and 15 years older than me. [The band’s founder] Luis Güereña was very involved in putting together benefit events for migrants in Tijuana, people affected by the civil war in El Salvador, etc. I learned a lot from him about people’s struggles all over the world.

Was it hard being so young and being in the band?

We used to play in several venues around the city, but most of them were bars or clubs. I wasn’t allowed inside until the performance was gonna happen, and then I was escorted out afterward. I hated it! I felt like I was missing out on all the fun! But that’s the way it had to be. It also didn’t help that I looked really young ’cause a fake ID wasn’t gonna work. One of my happiest days was when I turned 18.

You lived and worked in Mexico for years, but you moved to Los Angeles about 10 years ago. How do those two places affect your songwriting?

It has been interesting. I grew up in a border city, and from a very young age saw people trying to cross the border every single day. At first you don’t understand why people are doing this, but as you grow up you realize that Mexico is a country where the financial gap is huge. A great part of our population lives in extreme poverty, and with a lack of support of the government, people need to leave and try to make a better life for themselves and be able to provide for their families. While I was in Mexico, I wrote a lot about this stuff. Now, living in L.A., I see the other side of immigration. I see the obstacles people face every day here. It’s heartbreaking.

In terms of music, living in a border city allowed me to cross back and forth and watch amazing bands perform. When I was growing up, U.S. or british bands weren’t coming to Mexico, but we in Tijuana and we were able to go see amazing shows in San Diego. I listened to all kinds of music, Mexican and non-Mexican, since I was very young, and I think that opened my mind a lot. It helped me be more open about music. Also, I benefitted from learning English at a very young age, which made it easier for me to move between both worlds fairly easily.

Being here, I’ve been able to work with incredible musicians who have nothing to do with the Latino world, and that’s been very interesting and different.

Your revolutionary ideals and punk ethic are still very alive in your music. La Edad de la Violencia focuses on violence. What inspired that subject matter?

I always have focused on social issues, but as soon as I got pregnant, I started thinking about the world in a different way. What kind of world was I bringing my daughter into? I began obsessively reading about violence and questioning whether I was doing enough to make the world a better place for her. I got involved with a few social-justice organizations, and they inspired me as well. The more I read and thought about violence around the world, the more incredible people I was able to meet—people who work hard every day to make our world a more just and tolerant one. ♦

Marty Preciado is a music and cultural promoter in Mexico City. She is an organizer of Grrrl Nite, a monthly night of girl empowerment through music.