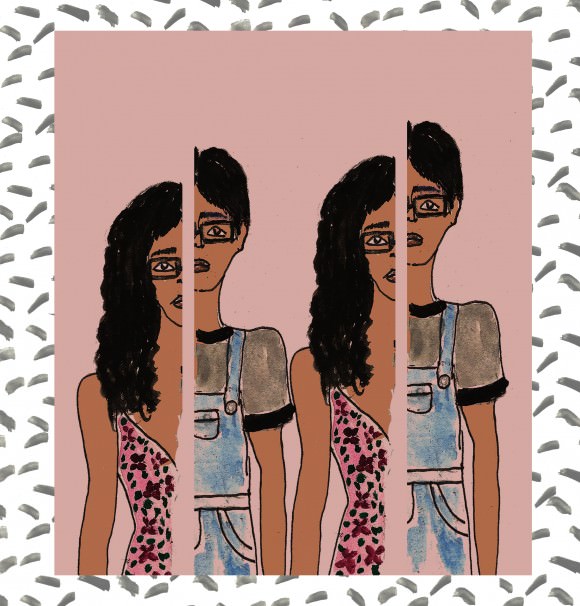 One of my early childhood memories is the sound of thin plastic sheets separating between my mother’s fingers as she peeled off a bindi and tried to stick it on my forehead. I would run away, screaming. By the time I was eight or nine, she had given up on trying to dress me in feminine clothes. I’d wrinkle my nose at the fussy lace and velvet dresses she’d picked out for me and reach instead for what were traditionally thought of as “boys’ clothes”: T-shirts and athletic gear often handed down from my older brother’s closet.

In sixth grade, I was hanging out with two friends and one of them asked me, “Shriya, do you know what it means to ‘surf the crimson wave’?”

I had no idea.

“How about your ‘time of the month’—do you know what that is?”

They went on an on, giggling at my ignorance, compounding my embarrassment.

Finally, one of them broke it to me: “They’re code words for getting your period! DUH! How could you not know any of these?”

I was 12 years old, and my only exposure to the idea of menstruation was the film we watched in health class (known folklorically at school as “THE MOVIE”), but I didn’t know any of the slang terms, because no one had ever talked to me about it.

Sitting there on the couch with my friends, I suddenly realized that I had no idea how to be “a girl.” More than that, I wasn’t even sure I wanted to be one.

Girliness, with all its trappings, has just never appealed to me. All my friends were starting to get boyfriends who they’d “go out” with for a week (though I’m pretty sure they just wanted to have a boy’s name and a heart in their AIM Buddy Profile). I didn’t see the appeal. I would rather eat bowls upon bowls of Cinnamon Toast Crunch alone on the trampoline in my backyard, which I did on the daily.

I experimented with being a “girly-girl” once, when I was a freshman in high school. Under the influence of my female friends, who constantly urged me to start dressing “more feminine,” I bought an actual DRESS. I mean, it was basically a T-shirt that I wore with leggings, but for me this was the equivalent of a tulle ball gown.

I put on my new outfit and went downstairs. The first person I saw was my brother, who did a double-take.

I felt my face get hot. “What’s that supposed to mean?” I said.

I promptly went back upstairs and changed.

Why did this compliment, offered in all apparent sincerity, make me want to disappear off the face of the earth? I’m not sure, but anyone’s calling attention to my female-ness made me feel deeply uncomfortable—nay, ashamed. I think part of this has to do with how I saw women around me being treated when I was little. Everything I had picked up about being a woman—they made less money, they got less respect, they just seemed so vulnerable—seemed really awful.

As I got older, I didn’t see any of this changing. I remember being on a family vacation to sunny California when I was 13 or 14 and announcing to my family that I was going for a walk on the beach. But my dad wouldn’t let me—he said someone could attack me, and I wouldn’t be able to defend myself. I hated that what he said was true, and that I didn’t have any control over it. I didn’t choose to be a girl, and there were all these disadvantages that came along with it. So, being called out for “feminine” traits like “looking good” in a dress didn’t make me happy. It reminded me of the unfairness of the world. It made me feel weak and lesser.

At the time, I toyed with the idea of being a boy, and I cut off my hair—all 11 inches of it—and donated it to Locks of Love. I continued to wear my brother’s clothes and began to dig around in my father’s closet as well. But now, with my short hair, those “boys’ clothes” read differently: not tomboy, but just boy. People began calling me “sir” (no matter how much eyeliner I caked on); even my mother would confuse me, from the back, for my brother.

To my dismay and utter bafflement, this didn’t make me happy, either. Wasn’t this what I wanted? To be a boy? But people’s new assumptions about my gender bothered me just as much as being complimented for traditionally “feminine” traits had. I was confused so on many levels; I didn’t know how to feel. Being a girl felt weird, being a boy felt weird, so what was I?

As I wallowed in confusion, my hair started to grow out. As soon as it hit “girly” levels, I shaved it off completely, but just on one side. My new look got a lot of disapproving glances at school, but to my surprise, some of the boys on the basketball team appreciated it, and one afternoon I found myself in a jock’s garage, sitting on a stool as he shaved steps into my head. My mother was not pleased when I returned home looking like T.I., but I thought it was kind of badass. More than that, it was the first time I felt that my outside appearance reflected my inner feelings about gender and presentation: I was neither “feminine” nor “masculine”—I was a separate thing that didn’t have to adhere to the rules of either gender. This is where I’m comfortable, and where I have remained.

These days, when the lights are just a little bit dim, I can very easily pass for a guy. My grandparents saw a recent image of me in a magazine. My face was covered with makeup and my hair was up, and they failed to recognized me at first. “Is that a girl or a boy?” they asked me. Who knows? Not me, and truthfully, I don’t care anymore.

A lot of people might feel insulted by people questioning what sex they are, but when that happens to me, I feel like I’ve WON. It’s incredibly freeing not to care if people think I’m a “pretty girl” or a “girly boy” or any variation of any gendered compliment. I am not my gender, after all, so why should I let it dictate anything about me? The possibilities of identification and dress are vast, and I don’t want to deprive myself of any of them.

When I look at in the mirror now, I see a goofy kid who wants to eat pizza, go skateboarding, and make art with friends. Sure, I am a girl. By that I mean that I check the box next to the F on all the forms, and I use female pronouns in conversation. But I don’t see the need to pick one gender and dress up as it for the rest of my life. I feel different every day, so why shouldn’t I dress differently every single day? Some mornings I wake up and put on my dad’s button-down, my brother’s pants, and a pair of sneakers; other days I choose a floral dress and sandals. And when I feel like expressing my dude side and my gal side, I wear a denim dress, a pair of Vans, and a bucket hat. Those in-between days, or both-and days, incidentally, are when I feel most like myself. ♦