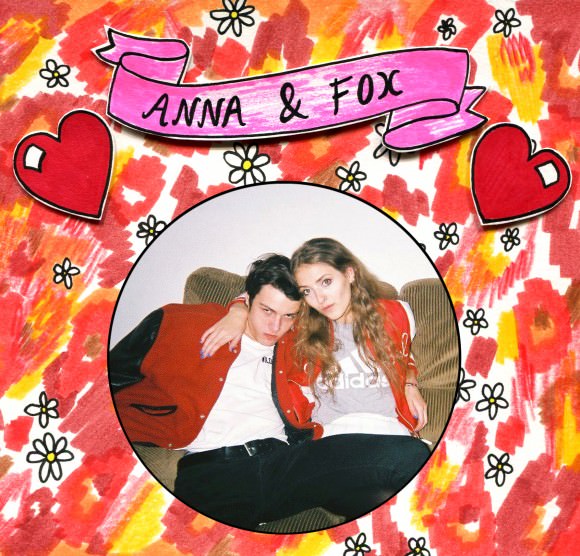 Fox Atticus Martindale grew up surrounded by music, enjoying the sweet sounds of David Bowie, T. Rex, John Lennon, and the Ramones on car rides with his dad. He picked up drums first, but when a family move made having an at-home drum set impossible, he started writing songs on guitar, figuring out a style of gritty rock that’s both melancholic and dance-y.

Though she sings on this track, Anna Collins’s musical history mostly comes from a different medium. She has been a ballerina and modern dancer since she was three, and says the structure of ballet helps her stay centered and escape the anxieties of the outside world. Anna is also Rookie contributor Petra’s sister, proving that everyone in their family is crazy-talented and awesome.

Fox and Anna, who are totally going steady, were born a day apart in Toronto, which makes it seem like they were destined to be together (if you believe in that sort of thing, which I sometimes do). “All the Things We Used to Do” is their first song together, and we’re excited to premiere it as Rookie’s theme song this month! I spoke to Anna and Fox on the phone about being collaborators in music and L-U-V. —Laia

LAIA: How did you guys meet?

ANNA COLLINS: Fox and I met in high school, but I actually “realized” who he was in 11th grade. He’d just gotten a haircut and had done a lot of growing up—puberty hit [him] over the summer! It was the summer all the boys started catching up to my height.

We had a friend in common, so we would hang out, and I would shamelessly flirt with him. I was intimidated by him—he made me a little nervous, so nothing ever happened. Then I went on the Rookie Road Trip and couldn’t get him out of my head, so when I came back, I decided to do something about my crush. We first got together at birthday party I threw for the two of us. I kissed him, and we’ve hung out every day since then.

Did you always want to play together?

FOX ATTICUS MARTINDALE: I’ve always wanted to teach Anna drums. I don’t think we ever really talked about playing together until I asked her to sing the song “Please” with me at a show I put on a while ago.

ANNA: It actually happened by accident. Fox was practicing in my room for that show, which was the night after. I was singing along, because I know and love all his songs, and then he asked me to sing with him at the show. I had never sung in front of an audience before, so it was totally new to me.

What was the process of writing the song like?

FOX: Anna was at work, and it was the perfect time to write. I was writing from the perspective of Anna watching me. Nine times out of 10, when I write a song, I record it the same day. When she came home, I pretty much sat her down and said, “Here are lyrics, here’s a microphone, and here’s the record button.”

What parts of the song do you think reflect yourselves?

ANNA: We are opposites in a lot of ways, which I think the song portrays. Fox embodies a certain persona: a badass teen boy out causing trouble. He lives with no regrets and is straightforward and fearless. His voice is really distorted, which parallels that. My voice is soft, high, and gentle, which sounds like my personality: I’m shy, timid, and sometimes misunderstood when I first meet people.

Was there a particular inspiration for the story you were trying to tell?

ANNA: The song has a lot to do with nostalgia. Fox and I often reminisce about high school because we’re both in weird transitional periods in our lives. I just finished my first year of university, and he just finished college. Everything is changing around us, but we’re still together. We’re the only consistent thing in each others’ lives right now.

FOX: I wouldn’t say this song is about us; it’s not inspired by our own lives. But the attitudes of the characters definitely resemble our personalities—just little things here or there that are true to who we are. Friends have said that it’s not so much the lyrics, but the sound, that reflects us.

Some say it’s kinda like a breakup song, with the chorus being about the “things we used to do,” but it can be whatever you want it to be. When I write songs, I want someone to take something from them and make them personal, rather than having them be about me.

Have you collaborated in any other ways?

FOX: This is the first song we’ve done together, but we may do others in the future.

ANNA: Fox and some of our friends started a record label called Fried Records. I’m very involved in the publicity side. I’ve also been wanting to choreograph a dance to one of Fox’s songs. I haven’t had the opportunity yet, but hopefully I will soon, because his songs really inspire me! ♦