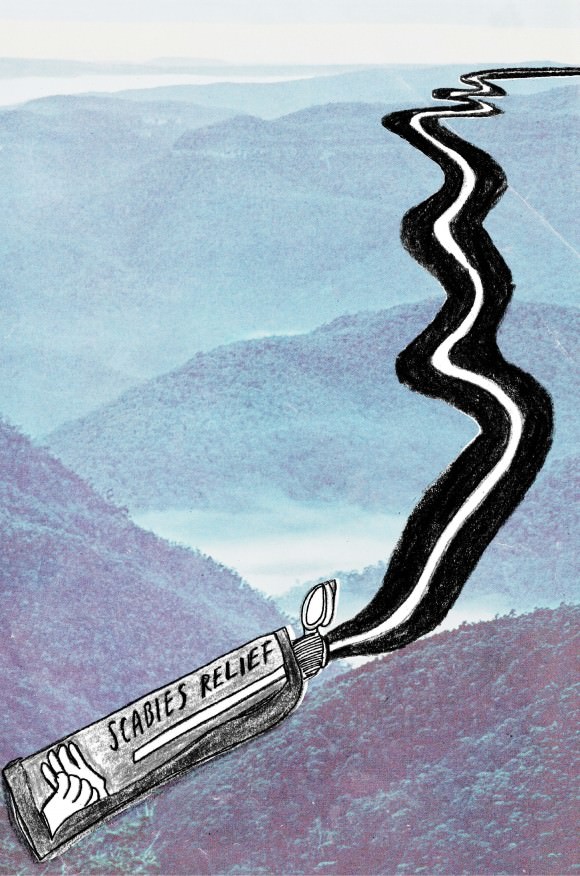 They come alive at night. Around 10 o’clock, they wake up to gorge on blood. It feels like a ghost brushing by, a shiver, the shadow of an animal scuttling across the room, except the room is inside yer skin, and the inside leather of yer skin crawls at night.

SCABIES: lice that crawl around and multiply UNDER YER SKIN. They spread via skin-to-skin contact, like cuddling, and can also live in furniture and clothing. Scabies is particularly feared in communes, where you live in close quarters. If you don’t treat scabies fast, the little critters spread and colonize—both UNDER YER SKIN and to other victims. They’re the bane of travelers, and a large part of the bad rep traveling kids get as being shwilly and gross.

So bringing scabies to a commune is the biggest oh-hell-no-no there is. As soon as Nigh and I had the epiphany that our itchy rash was not an allergic reaction to weird GMO vegetables but was, in fact, scabies, we skedaddled. We must have come off as real creepers in those few days between our arrival at this community and the morning we snuck off to treat ourselves: desperately trying to quarantine ourselves from those friendly communards, standing up where everyone else sat down, sneaking to the communal laundry room late at night to blast our clothes in the dryer, trying not to scratch as our faces grimaced in itchiness and anxiety and shame…

This nut-butter factory/worker collective/functional funny farm/hippie commune situated in the rural foothills of Missouri (pronounced Misery*) was the first stop on our 2014 road trip across the USA. It had been a difficult fall/winter for me: I’d been (I’ve been) too melancholic, waiting out winter in Nebraska with too many bouts of can’t-stop-crying-for-no-reason, can’t-hold-it-together-and-face-the-world bed-ins for too long, and there was a lot riding on this trip. My first road trip around the country, three years prior, had been an experience of ecstatic bliss. I was filled with a happiness that I haven’t known since, and I hoped that by getting on the road again (a trip, this time, with no end-date in sight), I could approach that good feeling again. Shake off these blues.

Nigh was patient with me as I moped around his cozy Midwestern town, but I wasn’t acting like much of a girlfriend. I’d shut down in front of him, curl up in a ball, and refuse to speak. I felt anxious that I’d lose my partner because I was no longer his cheery bright Anna, but had transmuted into an anxious blob that found nothing funny. The road trip, I hoped, would be our relationship-saver, a second honeymoon, the event that’d miraculously transform me into some lighthearted pixie again.

We shuffle around KC blowing our noses into our hands and some scratchy napkins collected from fast-food joints stuffed into our scabies-pockets. By dusk it’s getting itchier and we resist the urge to stick our hands down our pants and scratch furiously. We scratch furiously in the car, and at night we rip off our pants to access the damage done: long pink lines like trail marks left from scratching, plus more little red bumps. Tiny red bumps like the bumps on a rash, in small grouping—three or four or five or six, seven bumps in the warm spots of our bodies the mushy spots the back of the knee, the folds of the butt. The inner thigh, the crease where yer butt cheeks meet, the crease where yer leg hits yer crotch. Yer crotch.

Nigh had had scabies before, and had been able to get lots of scabies cream for free, no problem. In certain California towns, clinics will hand out the cure for free like it is no big deal. I figure they don’t want the scabies to go untreated, because then the infected/infested will pass on this contagious bug, so getting treatment fast is for the good of everyone. So we were under the impression that we’d be able to pick up some free cream at a free clinic. I have health insurance, but even with the coverage, one tube of cream cost 80-something bucks, and we needed at least four tubes for our long bodies. We had the money, but it was budgeted as our gas money, and we did not want to be out of gas before we’d even exited the Bible Belt. Plus, there was a certain amount of principle involved: Scabies cream is simply Permethrin, an insecticide—the same insecticide (diluted) that farms treat animals with. You can buy a giant tub of Permethrin at a farm supply store for about 10 dollars—it does not cost a lot to make—and it seems sort of criminal that Johnson & Johnson charges so much for the stuff…**

We spent the next week frantically hitting up every free clinic across the yellow lonesome prairie, desperately making phone calls and being told again and again that we were out of luck because we did not have permanent homes (only Kansas residents would be seen at the Kansas clinics; travelers are a no-go), so, no, they would not give us this cream (although, yes, they did have many tubes of it sitting next to them) but they would refer us to a homeless shelter.

We are HAPPY living in our car! I remember yelling, after being referred yet again to yet another homeless shelter—a kind gesture, but not at all close to the service we needed. We are very HAPPY with our living situation! Just because we live in the car does not mean we are homeless—I’ve got more homes than you—all of America is my home! House-less, home-full! We’re just being good citizens here, trying not to spread scabies across America! Good citizens! House-less, home-full!

Alas, “Home” (hippie-name for Nigh’s jalopy) wasn’t all that happy. Before setting off, Nigh and I had removed the car’s backseat, with the idea that we could tuck our lower-bodies down in the trunk, with our upper-halves resting in the back. There’d be plenty of space, because we’d only bring one pack and one milk crate apiece; that way, we’d be able to pull over to romance and snuggle anywhere we pleased. But of course, there always ends up being more… especially when our parents no longer want us to store our possessions in their garages (“You haven’t lived here for 10 years!”)…and we’re trying to stuff everything we can’t bare to part with in that itty-bitty sedan…too many briefcases of cassette tapes, art supplies, food box, two bags of freshies (one for us, one for the home bums), The Book of Secrets, BE HERE NOW, Jack Kerouac’s Book of the Dharma, too few books of poetry, more clothes, guitar, xylophone, raccoon hide, magic rocks, sleeping bag, tent, sewing kit, first aid kit…instantly, the car is too full. When we try to lie down to snuggle, we’re lying in heaps of our prized possessions. We curse our possessions, call ’em trash.

Lying down in trash is all the worse when you’ve got scabies. You know that by sleeping in the car, on top of your possessions, you are surely spreading the scabies to all those possessions and to the car seats and the car seats are surely infested with millions of invisible bugs and as you try to squeeze your eyes shut and slip away from this waking nightmare, the scabies are crawling out of your skin to meet and greet their scabies-friends and have sex on the car seat and then crawling back into your skin to scuttle around and have more sex inside of you and lay more eggs inside of you and start another colony inside of you…how very rude…and meanwhile itchy you is certainly not making any love with your itchy boyfriend in this itchy car on this nasty-ass trash heap…

* No offense, Missourians. Just telling it like I heard.

** Too much internet research in 24-hour Denny’s about how to rid ourselves of scabies for less than $300, which is how we learned tips for DIY treatments, diluting the farm-grade insecticide and rubbing it into your all-too-human skin. Granted, we were prissy wimps, and I turned my nose up at the home brew method. But still remained indignant that the human-grade lotion was so darn pricey.