This is going to be the party of the month. 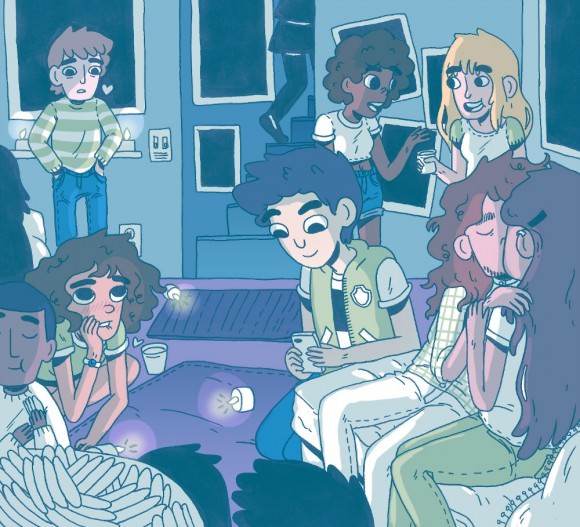 Taylor
7:33 PM
I am standing between two giant refreshment tables in my basement, trying not to throw up. The concrete floor is covered in pillows, blankets, and couch cushions, plus a futon that my parents used to keep in the guest room before it got “too shabby.” There are fake candles lining the walls (I don’t need to add “burned the place down” to my parents’ list of complaints). The whole place looks like a cozy bomb shelter and smells like chips and my perfume, which, I’m now realizing, I may have applied too enthusiastically. My best friend, Tilly, the only other person here (so far), says it smells like “an apocalyptic food court,” and that she means it “in the best possible way.”

The party was Tilly’s idea, of course. Tilly is the idea person. She’s the one who can take a napkin at a pizza place and turn it into a castle with a working drawbridge made of sugar packets before the waitress even shows up to take our order. Tilly makes things happen. And when she heard that my parents were going to Lake George to celebrate their 20th anniversary this weekend, she told me she only had three words for me:

“Pretty sure it’s three,” she said.

In the end, we went with a different approach altogether on the invitation: Saturday night, Taylor’s house, 8 PM: Swap Spit City, USA. (We like to keep things as classy as possible.)

Anyway, in roughly 30 minutes, about 25 people from my school will be here, including Daisy Mulgrew, the potential love of my life. There’s not much I can do now but wait. If I pass out before the party starts, please tell the doctors that I may have ingested an accidental overdose of Dr. Pepper Lip Smacker.
Tilly
7:40 PM
Darlings, this is going to be the party of the month! You never want to promise anything more than that—say it’s going to be the party of the year and you’ll just make yourself look like a liar in two weeks’ time when you top yourself yet again, you know? Shooting for absolute excellence within a 30-day time span is much more realistic!

Poor lovely Taylor has spent the last hour slathering gloss on her lips and pacing the room, stopping only to straighten a pillow or rearrange the faux candles she insisted on. Her nerves are all over her face—her mouth keeps twitching and she keeps staring at the truly horrendous futon in the corner like it’s showing her a scene from the future. I know she has a crush on Daisy Mulgrew—who is 95 percent coming, I heard Mike Powell saying—so I hope that works out for her. And I hope Daisy isn’t allergic to Lip Smackers, because I can smell that shit across the room, yikes!
Mikey 7:53 PM
Am I bringing condoms? The fuck? Why is Elliott texting me this bullshit 10 minutes before I’m supposed to be at this dumb party? Yeah, dude. Yeah, I’m bringing condoms to Taylor Lin’s party, because, you know, if there’s anyplace I want to lose my virginity, it’s in some basement in front of half of our class. Fucking Elliott. His dick has been at the controls for at least six months now. I think I liked him better when he talked about nothing but flesh-eating bacteria. Those were golden days, I now realize. If I hear him say, “Dude, I’d hit that” one more time, I’m going to fucking explode. Guess who you’d hit, Elliott? EVERYBODY, that’s who. No need to give us confirmation. We know you’d “hit it,” and then, theoretically, “quit it,” just as soon as a girl actually acknowledges that you exist.

Fuck I hate parties.
Elliott
7:58 PM
I LOVE PARTIES, MAN! And tonight is definitely my night! I hear there are going to be some girls from Franklin Central there, and my cousin says the girls at that school are craaazy, so I’m stoked. Mikey’s being a dick about the whole thing, probably because he broke up with Tilly Baker two weeks ago and she’s going to be there, because she’s Taylor’s best friend or whatever, but who cares! The girl of my dreams could be walking into that party right now, just waiting for me. Too stoked to exist right now!
Daisy
8:05 PM
Wait, was there something I was supposed to do tonight?
Taylor
8:07 PM
Oh my gawwwwd. The party technically started seven minutes ago and so far the only people here are me, Tilly, and Pete Fuller, this kid who sits behind me in bio and chews his hair. Tilly is trying to talk to him, but he doesn’t seem to have much to say. He’s shrugging a lot and nodding his head. Thus far, his hair hasn’t entered his mouth, so that’s a bonus. Maybe he’s hoping someone else will do the work for him. Ugh, now I’m grossed out. I have grossed myself out at my own makeout party, and it’s only been going on for seven—wait, eight—minutes. And now I’m out of lip gloss. This is gonna be the worst night of my life.
Tilly
8:15 PM
Pete Fuller has incredible hair. This is maybe the most terrible conversation anyone has ever had—I just asked him if he prefers 1 percent milk or 2 percent, and his answer was “soy”—but my god, darlings, I cannot blame him for chewing on those lustrous locks. Like “amber waves of grain” status, for real. He’s kind of a babe, in a gross way. Not my type, though. I prefer a man who can hold a conversation. And the correct answer is “Actually, I prefer chocolate milk.” Everyone knows.

Feeling a bit nervous for Tay—there are only 10 people here. She was expecting 25. Though I think there’s really only one person who matters to her, and so far she’s nowhere to be seen.
Daisy
8:21 PM
Wait, is today Saturday? I keep thinking it’s Sunday. Don’t you hate that? But then it’s great because, like, extra day! Wait, Saturday…there was somewhere I was supposed to go, I think?
Tilly
8:35 PM
Oh, wow. Mikey’s here. And I’m guessing the overwhelming scent of AXE means Elliott is with him.
Taylor
8:35 PM
Holy crap, Mikey showed up! I can’t believe he’s here! Oh, and there’s Elliott, who I can totally believe is here.
Mikey
8:35 PM
I can’t fucking believe I’m here.
Elliott
8:35 PM
WE’RE HERE, BITCHES! I mean bitches in the fun-loving sense! I respect women, shout out to my mom and my sisters! Respect! Oh, man, are those sour cream and cheddar chips? That’s mean! Who would put those out at a makeout party? Stop trying to stop my swag, Ruffles! I’m keeping it minty fresh tonight! I should probably stop yelling to myself! I might look too excited!