A scene report and interview with the cast and writer of The Fault in Our Stars.

Don't Mess With Our Girls 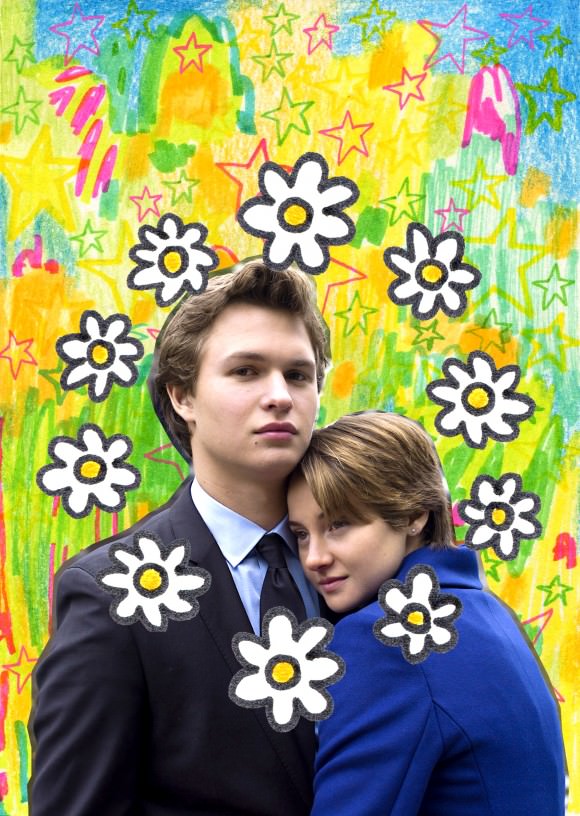 By now, you may have heard of John Green’s YA novel The Fault in Our Stars. You may also have heard that a big-deal movie based on the book is coming out on June 6. Both are about Hazel Grace Lancaster, a 16-year-old who likes hefty books and America’s Next Top Model in equal measure. After she’s diagnosed with cancer, she meets Augustus Waters, a terribly handsome survivor of the disease, at a support group. Then they do that thing that teens in novels are wont to do: fall in L-U-V.

You can’t help loving Hazel and Augustus as a couple. Unlike in many other teen-romance books, they aren’t hyper-glamorized, plus they’re hilarious. I won’t say much regarding the end of this book, but I will tell you that it made me open-mouth sob uncontrollably, and I rarely cry over books.

In high school, I had seen John Green’s name in my Tumblr feed, where girls fawned over the wisdom in his highly quotable vlogs and his previous YA novels, vlogs and his previous YA novels, Looking for Alaska and Paper Towns. After reading TFIOS two summers ago, I’ve counted myself as one of those adoring fans, so you can imagine my excitement when, in September, I got to fly to Pittsburgh to watch part of the movie being shot. Even better: I got to talk to some of the cast members, like Shailene Woodley, who plays Hazel, and Ansel Elgort, aka Augustus Waters—plus John Green himself! Here’s my account of that extremely rad day.

I’ve never been to a movie set or a press “junket” or whatever, so at the event, I’m as intimidated as any other enormous fan of Green’s books would be. Every time I introduce myself to a producer, another writer covering the event, or really ANYBODY, they say, “Oh, Hazel! How fitting.”

The press group I’m part of is taken to the church where one of the book’s first scenes is being filmed. It’s the one where Hazel and Augustus first meet at the support group, which is held in a cross-shaped house of worship that Hazel calls the “Literal Heart of Jesus.” Augustus, the cutest boy in the room, flirts by aggressively staring Hazel down, and Hazel stares right back in defiance. “Finally, I decided […] to stare back,” she says in the book. “After a while, the boy smiled, and then finally his blue eyes glanced away. When he looked back at me, I flicked my eyebrows up to say, ‘I win.’” I knew right then that I was obsessed with her.

In the movie, the rest of the support group aren’t played by actors, but by real-life teens battling cancer. Part of what makes TFIOS so affecting is its unflinching depiction of terminal illness, which is all around us—in all likelihood, every person you and I know has been impacted by it in some way. It’s a part of everyone’s life, but thinking about it still makes a lot of people really uncomfortable. When TFIOS came out in 2012, there was some controversy over whether the subject matter was “appropriate” for teenagers (the Daily Mail called it “sick-lit”) and whether giving the main character a fatal disease was too emotionally manipulative. I don’t think it ever occurred to these critics that teenagers, like all humans, truly do suffer. Also, reducing the plot to a “cancer story” is deeply offensive. TFIOS is, first and foremost, a love story about two snarky teenagers who also happen to face an illness that affects millions of young people just like them.

John Green drew inspiration for the novel from having worked at a children’s hospital for six months when he was 22 years old. He says that most stories about childhood cancer portray “people living with cancer as mere tragedies, or merely brave,” something he wanted to avoid. “There’s something about characterizing someone that’s merely brave that dehumanizes them,” he says. “People say, ‘Oh, I could never live with that.’ Well, of course you could. And you would, if you had to.”

I’m happy to report that John Green online = John Green in person, lest you thought he was catfishing all his fans with fake wit. He’s the exact embodiment of his enthusiastic tweets, the wise-cracking vlogs he does with his brother, Hank, and his completely accessible overall web presence. The first question I blurt out after shaking his hand is the most self-centered one possible (yes, it’s about my name, ugh). He tells me that he chose the name Hazel because the character was “in between worlds”—youth and adulthood, life and death—and the color hazel is between brown and green. I can feel a dorky grin spread across my face.

Hazel says in the novel, “There will come a time when there are no human beings remaining to remember that anyone ever existed or that our species ever did anything. […] And if the inevitability of human oblivion worries you, I encourage you to ignore it.” Augustus (Gus for short), meanwhile, wants to make the biggest mark he can while he’s still alive. When I meet Shailene Woodley in the church basement, I ask if she sympathizes with Hazel’s worldview. “It’s funny,” she says, “because I [would have] related more to Gus when I was that age. I was like, ‘Oh there’s so much to do, there’s so much to change! I want to be remembered and help the environment!’”

Describing her character, Shailene says, “She doesn’t think she’s special in any way, shape, or form, and that’s kind of what makes her special. I’m inspired by her ability to recognize the faults in the world and to see the wrong in them, but not feel like it’s her job to correct them. Those are important lessons for all of us to learn.”

John Green says working with terminally ill children made him really angry, because he felt they had been denied access to a good life. He dealt with those feelings by writing TFIOS, and eventually came to believe that “the universe doesn’t care very much about individuals, but that doesn’t prevent you from having a good life. It wasn’t impossible for those kids to have a good life just because they died so young. I realized it’s possible to have a good life and a short life.”

My favorite thing about The Fault in Our Stars is the way Augustus and Hazel sarcastically bicker and joke with each other, like when Augustus makes fun of what Hazel asks for when a wish-granting organization comes calling: “You did not use your one dying Wish to go to Disney World with your parents,” he admonishes her. John Green’s characters don’t talk the way people my age actually talk—instead, Green says, his teens talk like real ones “want to think they talk.” Fair enough: If Romeo and Juliet can talk to each other in poetic verse, Augustus and Hazel can convey their love as dramatically as they want. “I’m interested in using text to reflect emotional reality,” Green says. “Now, we don’t speak to each other in sonnets, but that’s a very effective tool for capturing the idea of love that was destined and fated to be.”

What he really hates is when people say real teenagers aren’t as smart as Hazel and Gus. “[That] tends to be something adults say. I don’t think adults give teenagers enough credit as intellectually engaged people. The way teens approach big, important, interesting questions is more interesting than how adults do it, because [teenagers] tend to ask them without fear or embarrassment. They’re willing to ask why suffering exists, or ‘What’s the meaning of life?’ Adults ask those questions under 72 layers of irony for fear of appearing unsophisticated.”

The second scene we get to see is the one where the couple leaves a group counseling session. Augustus asks Hazel if she wants to see a movie, then puts a cigarette to his lips. When Hazel becomes furious, he explains that it’s only a metaphor: “You put the thing that kills you right between your teeth, but you never give it the power to kill you.” In each take, Shailene and Ansel do something a little different. After one, Shailene looks at Green and asks if the scene is “up to your ‘cute’ standards?” Green smiles and replies with a thumbs-up: “Yes, extra cute.”

Although Green knew he was writing a sad story, it didn’t fully hit him how emotionally demanding the plot was until he began watching the movie being made. “I tried to make the book as funny as possible, but it is about dying when you’re young. I don’t know why anyone would read a sad story. It seems horrible. But this is not a sad story. This is a love story, really.”

A lot of people ask him what happens after the book ends, but he says he can’t answer those questions because he just doesn’t know: “When you start giving people answers to things outside the text, it gives the author a power I don’t want to have. I want you to have it. I want you to be making those choices.”

Of course, for those clamoring for more TFIOS, there’s always the movie. Shooting it has proved grueling, especially for Ansel, who recounts one particularly devastating scene in which Augustus becomes intensely ill while driving and calls Hazel to come get him: “I was acting like a four-year-old. It’s the toughest thing I’ve done as an actor.” Nat Wolff, who plays Augustus’s blind friend Isaac, also had a hard scene, in which he had to smash a wall of trophies in anger: “I had to smash a couple of certain points, but in the heat of the moment, I smashed all the wrong spots. Good times.”

One particularly memorable moment on set came when, after a long, tiring day of shooting, Green heard piano music coming from the church sanctuary at 4:15 AM. “I heard this sad and sweet, seemingly improvised song, and I went in and saw Nat and Ansel playing together,” he recalls. “When you’ve been up all night, and you’re so tired, to have this moment of seeing them connect so deeply was really extraordinary.”

For Shailene, The Fault in Our Stars has been a transformative experience. She says the book taught her to live in the present and to be aware of what’s happening around her, rather than worry about the future or feel guilty about the past. “The thing about John Green, and this book,” she says, “is that these aren’t new ideas—it’s just a way of articulating these thoughts we have in our hearts, in words that make sense. People are going to see it and be affected.” ♦