What a strange feeling, to get what you’ve always wanted. 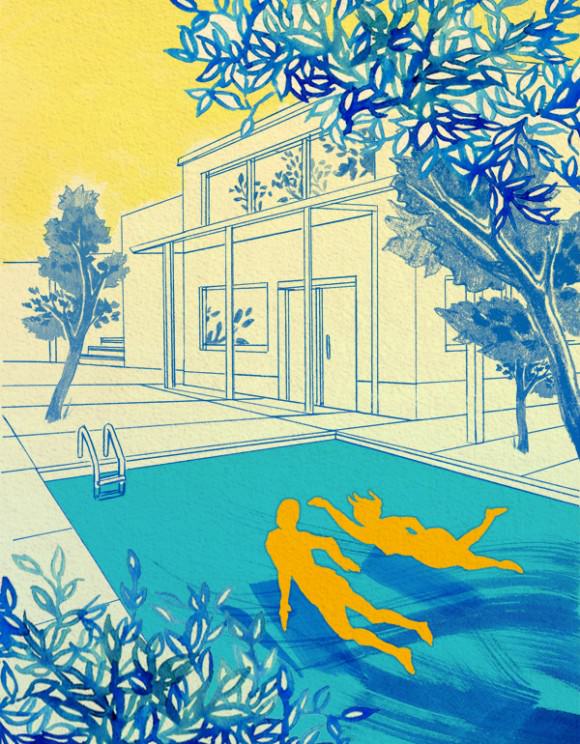 Chris pulled off his bathing suit and stood undressed in front of the long mirror. He liked that at any moment someone might come in and see him. He liked the way he looked, too—thin and brown, with too-small ankles and broad feet. He turned to eye his back, burnt again. The bathroom smelled of chlorine and toilets. He threw his T-shirt on and splashed his face with water. No time to shower now. He had to meet Alice across town in 20 minutes. He waved to the other lifeguards and jogged to his car.

The properties in Penn Valley had lush, sloping lawns and mailboxes that were miniatures of the homes that were mostly hidden behind high fences and trimmed hedges. On Alice’s street, one of these mansions even had a name. Le Chantilly, he said to himself, sure he was stressing the wrong syllables. He’d never paid any attention in French class.

Besides lifeguarding, Chris did odd jobs all summer. The last time he asked his mother for money, she glanced up from her book and laughed. His little sisters were costing her a fortune in summer camps and piano lessons.

Chris was going to pick Alice up, then take her with him to clean the Mitchells’ pool. She didn’t seem to mind tagging along on these errands, and he liked having her next to him. As far as he knew, when she wasn’t getting high with him and the rest of their crew after dinner, she spent the rest of her time taking summer-school classes. They hadn’t gone on a real date. They were both virgins, and that made her feel better, he knew. One time he had brought it up while they were chatting online. Sex. She said, “I guess I’ll think about it?” His pulse stirred just remembering it. Last week, after she watched him weed the Robinsons’ garden, she’d straddled him on their patio. Her knees pressed into the teak bench as he put his hand down her shorts.

In her driveway he honked twice. Alice came out a second later, her hair caught up in a tangled ponytail, tan arms swinging. She slid into the front seat and stuck her mouth to his.

“You smell like pool,” she said. He drove and stole glimpses of her thighs, spattered with fine hair. For several weeks now, he’d felt a heaving need to say it to her, but he hadn’t been able to manage.

Earlier that month, at a party, they’d gotten married. Soren had performed the “ceremony” after the seven or eight of them had finished two bottles of vodka. Alice was shy and drunk, giggling as she whispered, “I do.” Later, Chris’s friends made fun of him for how seriously he took what was obviously a joke. “Your eyes were shining like it was the real thing,” Alice said the next morning, when they woke up on the couch. She seemed to be evaluating him. He blushed and told her they should get bagels.

At the Mitchells’, Alice’s legs circled in the green pool water as Chris scooped bugs off the surface with a long-handled net.

“It’s kind of dirty,” she said, her feet swirling up muck that had been stuck to the pool’s sides.

“They don’t pay that well,” he said, dropping the net. He grinned at her. He could see down her shirt. One time, while fumbling with her bra, he’d checked size on the tag so he could brag about it later. 34B. “That’s not that big,” Soren had said, laughing. “It’s more than you have to brag about,” Chris scoffed. The most Soren had done with a girl was bake an apple pie.

He saw Alice’s calves, shiny in the water. He took off his shirt, then pulled down his shorts and underwear. She just watched. He jumped.

There was barely any chlorine, so the water didn’t hurt his eyes. He stayed under until he reached her toes, then popped up. She already had her shirt and bra off. She was peering over her shoulder to check if any neighbors could see them over the fence. There was a bead of sweat in her cleavage. Chris put his nose there and breathed deeply.

“You’re burnt,” she said, touching his back. “You never wear sunscreen.” Her eyes were serious, then hesitant. She started to unbutton her shorts.

Naked, they dove underwater, came up for air, and then went down again. They floated. She rubbed her eyes and swam toward the stairs. She got out of the pool and lay down in the grass. He was afraid to meet her gaze too often or for too long, lest something inside him pop.

“Isn’t it itchy?” he said, following her out of the pool.

He stood next to her. She propped herself up on her elbows.

“You want to come down here?” she said, shading her eyes from the sun.

Sometimes he wondered if he would feel the same stinging want for her if they had already done it. He lowered himself to his side and faced her. Droplets of water were trapped in the dark hair between her legs. He put his fingers on her hip, then on her cheek. He could feel blood pumping under her jawbone.

“I love you,” he said. Alice blinked at him once, twice. She kissed him softly, and then with a full, rolling tongue. He cupped the back of her head with his palm, then pulled himself on top of her. His body was between her legs, which wrapped around him. It was as if they had been doing this all along.

“It doesn’t hurt?” he asked, then silently cursed himself for saying something so obvious.

“The tiniest bit, but it’s OK.” The dry grass made the tiniest crackling sound under them as they clung together. He pressed himself to her, trying to figure it out.

“I think we should stop,” she said. “We’re not using condoms or anything. It’s a bad idea.”

They detached, got up, and jumped into the murky water. All the evidence of what they had done was gone. He didn’t dare say anything about it, afraid it had been a strange daydream.

They got dressed and went inside the Mitchells’ house to feed the cat. He scooped poop out of the litter box and Alice disappeared somewhere—to the bathroom, she said. He was afraid she would sneak out the back door and he would never see her again. How dumb, he thought. He flushed the litter down the toilet, turned around, and there she was.

“Look what I found,” she said, half-smiling, holding a long package that connected five or so condoms. Chris laughed out loud. For a while they watched premium channels on the enormous TV, then they tried again. Their limbs stuck to the leather couch, and it grew dark outside. It was strange, Chris thought, that it felt both incredible and like he wasn’t doing it right. Alice wiggled under him and let out tiny, quiet breaths. They put their clothes on again and sat in front of the TV. He wanted to know.

“Why tonight?” he asked her, still staring at the screen. She was sitting with her legs crossed pretzel-style on the couch. Her forehead was sweaty.

“I always said I’d wait to do it with someone who loved me. And you do?” She studied him.

“Yeah.” Suddenly he felt sad, as if they’d missed a step. “What about you?”

“I don’t know yet. I like you more than anyone else before.”

“Maybe I should go home.” She sounded like she was going to cry. Maybe he was, too, but not in front of her.

In the car, they didn’t speak. They turned onto Alice’s street and passed Le Chantilly. Chris could tell she was really thinking about what to say next. He pulled up to her house and turned off the gas.

“Hey,” he said. He looked directly into her eyes. What a strange feeling to get what you’d wanted, then to realize the thing you really wanted, you hadn’t gotten at all.

“Remember we’re married, so you can’t get mad at me,” she said finally.

“OK.” She leaned over and kissed him, hard. “Goodnight.”

He watched her walk to the house. Tomorrow the Ericsons’ dog needed walking, and there were some other errands he couldn’t remember now. He would call her after she got out of summer school to ask if she wanted to come along.

When he got home, his mother and sisters were asleep. He took a shower and dropped into bed. The rustle of the sheets brought him back to the Mitchells’ dry lawn, and to Alice. ♦