A new song and a conversation about identity, femininity, community spaces, and Nicki Minaj. 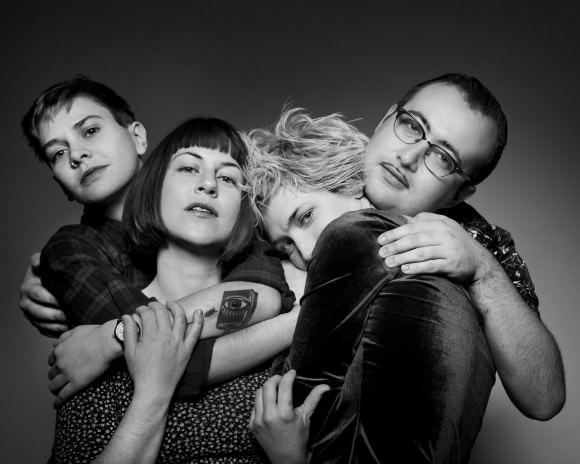 The first Priests song that caught my ear was “Leave Me Alone,” a snarly, screamy “get the fuck away from me” anthem from the band’s 2013 cassette, Tape Two. Since then, the DC band has been working on their new EP, Bodies and Control and Money and Power, out June 3 on Don Giovanni Records. And look! We’ve got the premiere of one of the song “Modern Love/No Weapon”:

I talked to the band (Katie Alice Greer, Daniele Daniele, Taylor Mulitz, and G.L. Jaguar) about songwriting, community spaces, and why Nicki Minaj is the best.

HAZEL: In “Modern Love/No Weapon,” the song we’re premiering today, you’re calling out government agencies, and a lot of your other songs are overtly political. Does living in DC have anything to do with that?

KATIE ALICE GREER: Maybe, but also no. Living in this city might magnify the [political] dynamics that go on in anybody’s life anywhere, but I don’t think someone will necessarily appreciate our perspective or our songs more if they live in DC. We’re writing about conversations we have and personal experiences.

The song also references some less political things, like the poem “Emerald Ice” by Diane Wakoski.

DANIELE: It almost reminds me of when the Dadaists were using trash from all over to make their art. You’re collaging all these different pieces in your head that are hard to make sense of. There’s something very overwhelming and exhilarating about having infinitely available options around you all the time. What do you choose? How do you say no to any of them? Don’t you always feel like you’re missing out on something, and constantly playing catchup with what you “should” know? On top of this, is there any mystery in anything anymore? With the internet, you could just look up who wrote that poem and where that line is from.

KATIE: I referenced that poem—and a Modern Lovers song—because other people always seem better at talking about love and desire than me. It’s not my strong suit right now. I never sit down to write songs about my personal feelings or relationships, but often that stuff just works its way into my lyrics anyway. It’s a song about many things, but it’s definitely about feeling obsessive and distracted even when you are trying so hard to think about or do something else. It’s also about how a lot of times I avoid trying to explain myself, because no matter what I feel, what I’m saying is not good enough for me—or it’s a “fake” version of a “real” thing that I feel. I find myself debating my own authenticity a lot, which I think is mostly just me questioning my legitimacy as a writer and a woman and an artist.

“And Breeding” plays like a specifically millennial call for reform, being disappointed by Y2K, etc. But I’m most interested in the part where you sing about turning Elvis Presley and Madonna into Che Guevara.

KATIE: The Y2K thing [came about] because sometimes I’m seriously bummed that the world didn’t end in the year 2000. The whole narrative in that song is supposed to be completely outrageous, but at the same it’s all true. The ends I’ve been told to achieve seem totally pointless to me. I feel personally disconnected from electoral politics, and I really do think people would care more if the pop icons everyone is obsessed with were more provocative, revolutionary characters. I specifically said Elvis and Madonna and Che Guevara because I remember those characters were all popular on dorm room posters when I was in college. Like, I remember seeing Che Guevara posters next to posters of naked women with, like, weed leaves on their breasts.

DANIELE: It’s kind of a weird way to combat the cynicism that is so prevalent in pop culture today, ’cause, you know, I do really kinda wish we had more cultural icons that were exciting, interesting agents of change that we felt like we could rally behind.

Katie, you wrote a post on Tumblr about why you like performing your song “USA Incantations” in front of crowds that don’t necessarily “get it.” Do you have an idea of how you like communicating with audiences, or does it change from show to show?

KATIE: It’s definitely a fluid thing. That song was meant to be disruptive in a certain place to a certain audience. It’s fun to be confrontational with your music and to provoke people. It feels useful. Punk has a history of being confrontational, but there are plenty of tropes that have been used up and aren’t confrontational anymore. I can smear peanut butter on myself and make crazy faces, but it would be kind of boring and pointless, because Iggy Pop did that 40 years ago.

What are you all listening to now, music-wise?

DANIELE: I’ve been reading the Tracey Thorn autobiography—I’ve been a huge Marine Girls fan for a while now—and it brought me back to the stuff that came right after the punk peak in Britain. So, Gang of Four, Scritti Politti, Aztec Camera, all those bands.

KATIE: I love Nicki Minaj. I love when she posts new tracks on her Instagram. I think she’s so impressive and brave as a pop artist. She’ll rap over totally disparate-sounding beats. I’m a big Lucinda Williams fan, too, so I’ve also been revisiting one of her records recently.

DANIELE: Yes! I love that she’s so femmed-out and such a boss at the same time. Artists who present themselves this way will always be challenged. When you’re ultra-feminine and also dominant and assertive, you’ll find a major backlash.

KATIE: She’s a good example of how people don’t trust the construction of femininity. There’s a great Avital Ronell interview where she talks about femininity being defined by this artifice that celebrates the multiplicity of life: You can wear makeup and present these differing and potentially conflicting ideas. But we live in a patriarchal world where we don’t trust people who present themselves in this way. [Nicki Minaj] just put out this track “Yass Bish,” and I read something that said that now that she’s not wearing as much makeup, we can see the “true” Nicki and her talents.

DANIELE: As if suggesting having darker hair and not having fuchsia lips made her a better rapper.

That’s one of my biggest peeves, when people talk about how not wearing makeup is “real,” “natural” beauty.

DANIELE: Makeup is a visual reminder of your contrived-ness. So when people see someone like Nicki Minaj constructing this really bizarre appearance one minute, and a more natural one the next—and both of those appearances are totally performances—it turns a mirror on us and shows us that we can’t take our own assumed identities for granted. It’s threatening in a certain way, but it shouldn’t be. There’s no “natural” identity you were born with. The aspects of our identities that come from choices are just as legitimate as those that are a product of the environment we were born into—maybe even more so.

Katie has written about the value of community spaces for discovering not just live music, but all kinds of culture. What, in your opinions, is the ideal community space and would Priests ever consider starting one?

TAYLOR: If I’m in a place at some point in time where I can sustain something like that with my peers, then hell yes. What would it look like? It would be a space where you could organize or host events of all varieties. It would have a print shop, a moon bounce, a place to sell your clothes, another moon bounce!

G.L.: If I were setting up a space, I’d definitely want to be in a community and be part of that community, as opposed to showing up somewhere and saying, “Hi, we’re setting up a punk venue!” A lot of places don’t take into consideration the community that’s around them.

KATIE: Ideally, it would just be a public space people would want to go to. There are shows and public forums that already exist, but often, for whatever reason, they don’t seem appealing to people. We would all rather just sit at home and watch [a show] on a computer. We live in a world that’s set up for isolation.

TAYLOR: Scratch everything I just said. The community space should just be a room with 20 iPads. [Laughs]

KATIE: [I’d like] community space that would make the idea of people hanging out in physical space seem like a sexy, fun thing to do. That would make sense for me! ♦