A premiere of a track from “a private place full of dreams and disappointments.” 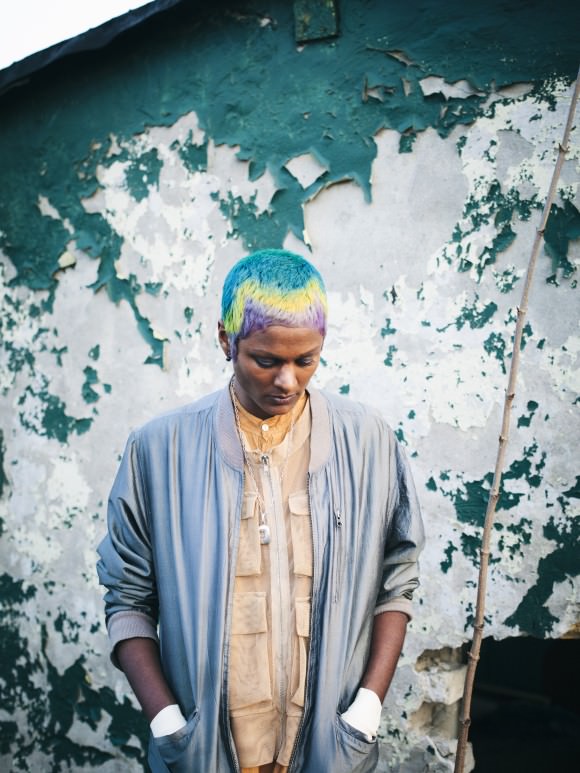 Perera Elsewhere is a powerhouse, to say the least. The Berlin-based singer-songwriter, frontwoman of the band Jahcoozi, DJ, and producer blends her soulful voice with ornate trip-hoppy beats to create a sound that’s at once sultry and ethereal and that is sure to creep its way into your consciousness. Want proof? Listen to this new mix of her song “Giddy,” from the deluxe edition of her album Everlast, out tomorrow on Friend of Friends:

I had the pleasure of talking to Perera Elsewhere (aka Sasha Perera) about happiness, sadness, travel, and the wonders of chance.

DJALI: This album is a departure from your Jahcoozi “barefoot dubstep” sound. Can you tell us what you were thinking about while you were making it?

PERERA ELSEWHERE: The album is the result of a lot of coincidences. Since I basically made it alone, I wasn’t really communicating with other people during its creation. Alone, I’m able to piss around in whatever way I want to in terms of production. Soundwise, it is very different from my earlier work because I produced it, so it sounds really kind of dusty and not really high-fi like Jahcoozi.

Why did you want to make this one alone?

The fact that I had the nice Jahcoozi studio microphone parked in my house in 2010 was a plus! I’d always had a mic and setup on my computer, but I never had a really good mic in my house. But with this mic, a really trashy guitar, and a lot of spare time, I knew it was time to experiment.

You were born in London and currently live in Berlin; parts of Everlast were recorded in Nigeria and Sri Lanka to make music. Does travel inform your work?

When I was a kid, we used to go to Singapore [a lot], and we ended up living there for a few years. Traveling is just something that we did. My parents did it without really thinking about it, and I’ve also done it just because I wanted to. The Goethe-Institut, which is a German cultural organization, invited me to Nigeria and Sri Lanka for some music projects. While I was there I recorded a lot; it happened to be at a time when I was making new material. Come to the end of 2012 and early 2013, I thought, Well, I have enough tracks to make an album. Everlast sounds more like an album than anything I’ve ever done, because of its effortlessness.

The songs “Bizarre” and “Schlepperblume” have an otherworldly vibe to them. How did you achieve that sound?

Well, I record most of my music with my MacBook and a mic using a small setup. I made “Schlepperblume” in an old farmhouse in the countryside of East Germany on my birthday last year. It wasn’t conceptual—it was more like, “OK, what do I do? I’m bored.” Some of it was recorded in my kitchen on a shit phone, which is why the beats sound like I sampled them from some old recordings. The song “Shady” was recorded in Sri Lanka in a house as well. Most places I record in are not soundproofed rooms, so there’s a lot of sound oozing in from the outside world. With my music, you can have funny sounds [coming in] from the outside. It doesn’t really matter. [Laughs]

I think if someone gave me a recording studio and said, “You’ve got a week to work on some stuff,” I’d probably get scared and feel pressured. I’m a big fan of coincidence and one-thing-leads-to-another and things not being contrived. I made this album over three years in different places, and I didn’t rush myself at all. I can go to the Jahcoozi studio and create Perera Elsewhere stuff if I want, but I actually prefer working in my living room, in my house, in the middle of the night, in my kitchen…I just like that environment.

I know that Perera is your last name, but where’d you get Elsewhere from?

Elsewhere is a reference to many things. Before this album came out, most people had seen me on a club stage, with banging beats, being really energetic, so this was me doing something that no one really expected me to do. It’s elsewhere to where I predictably would be. Also, this is the most emotional music I’ve made. It comes from a place that you cant really put your finger on. It’s a place somewhere for me that’s full of dreams and disappointments. So, it’s a private place and a creative place, a made-up place. It doesn’t exist.

On “Drunk Man” and a few other songs, it almost sounds like you’re trying to communicate with another dimension. If you had to name that space, that dimension, what would you call it?

Ah, I don’t know! The other space is maybe, on the one hand, the part of your psychology that you’re secretly running away from, but also the side of you which you project, which you would like to be, but you’re not. It’s sort of a weird sort of psychological space with lots of things mixed together.

What are you planning on doing next?

Truth be told, I’m not very good at planning. I’m already making a new album and new material and collaborating with different people. I wouldn’t mind doing something with my friend Hugo Schneider, who does all my videos. We want to do a video instillation piece together for a theater in Switzerland next year. Through doing this album, I’ve been asked more and more to put my own mark on stuff in terms of producing. It’s really exciting! ♦