A chat with the teenage sisters of a polygamous family, as seen on My Five Wives.

Like many viewers, I started watching My Five Wives, TLC’s new reality show, because I was fascinated by the family structure of Brady Williams, his five “wives” (he’s not legally married to all of them, but they live as partners), and their 24 kids. They are former members of Church of Jesus Christ of Latter-day Saints (commonly known as the Mormon Church), which denounces “plural marriage,” but some fundamentalist splinter sects encourage and live by it.

The Williamses practice what they call “progressive polygamy,” which for them includes embracing beliefs that don’t align with their former religion, like supporting marriage equality, believing it’s OK for women to have multiple husbands, and supporting feminism. Brad Williams and his wives—Paulie, Robyn, Rosemary, Nonie, and Rhonda—say they entered a plural marriage because they believed it was commanded by God, but that they continue to practice it because they love one another.

The Williams brood includes 10 girls ages 13 and above, 4 younger girls, and 10 boys. While the prospect of living with that many other people is overwhelming to this only child, the love and commitment the Williams clan have for one another is palpable on every episode of the show. Their family structure may not be mainstream, but their ambitions, mutual support, and excitement over going through life’s adventures together are what any kind of family aspires to, and that kind of love, I think, is universally inspiring.

Recent episodes of My Five Wives have showcased the Williamses’ teenage daughters as they explore dating, fill out college applications, and move out on their own. I wanted to find out how it feels to be a teenage girl living in a publicly polygamous family, so I called Eden (who’s 13), Maura (13), Rachel (13), Taylor (15), September (15), Madeleine (17), Lauren (17), Kimberly (18), and Hannah (20) to get the scoop. (Although they were all on the line with me, some of them were too shy to speak up, according to their more talkative sisters.) Here’s my conversation with the girls.

JAMIA: As an only child, I’ve often fantasized about what it would be like to have lots of siblings. Is it just one big slumber party all the time?

TAYLOR It is a big huge party every single day. It has never been boring!

HANNAH: Once you’ve been in a family our size, it’s just normal. And once you’re away from it, you really miss it—all the noise and all the chatter. If one person’s missing, you notice.

Part of my fantasy of being part of a big family was that my older siblings would share their cool music and stuff with me. What music do you guys like to listen to?

HANNAH: Right now, I’m really inspired by Lily Allen and Janelle Monáe. They both make interesting music, and they talk about relevant issues of the day.

SEPTEMBER: Falling in Reverse. They are more of a punk band.

What do you think people misunderstand most about your lives?

KIMBERLY: I think a lot of people don’t think a man can love more than one woman.

MADELEINE: Sometimes people question whether my dad can be a good enough dad for 24 kids. But he’s really the best dad. I think he’s great. We all do.

HANNAH: He’s better than a lot of other dads, who leave their children. 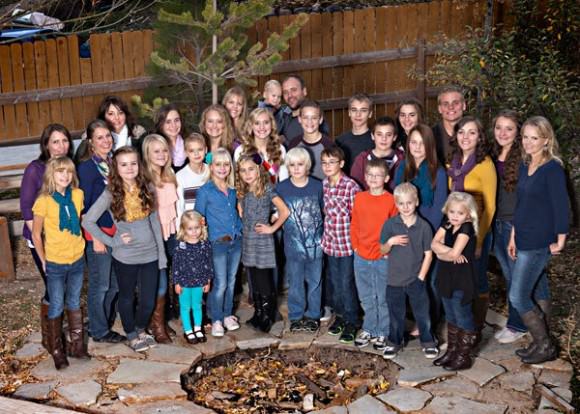 I saw that your father recently posted a picture on Facebook of a bunch of feminist texts by writers like Luce Irigaray and Simone de Beauvoir. Do you guys talk about feminism around the house?

MADELEINE: We talk a lot about feminism because my dad is learning about it in college, and he shares what he’s learning with us. Feminism means that women are equal to men and they can do anything men can do.

HANNAH: I’m in the same college class my dad is in—the feminism class. Feminism isn’t what a lot of people think it is—it’s not only that women are equal to men. It’s obvious that men and women are different. People give us an image of [feminists as] women in pantsuits asking for a fair wage. But we can wear dresses and be feminine. We can still be feminine and figure out what [it means to be] equal to men.

You live just outside Salt Lake City, Utah, which is home to a robust Mormon population. Your parents have mentioned on the show that they want to expose you to diverse cultures. They also support gender and marriage equality. Is it challenging to have such open-minded parents in such a conservative community?

MADELEINE: I really like it, because we kind of get to see both sides. We get to see the more conservative side when we’re with our friends in the community, then we come home and see [the other side], and then we can make the decision about how we really feel.

Are there any issues facing girls and young women today that you think are particularly important?

KIMBERLY: I think an important issue young women—and all women—share is stereotypes. We always have to look beautiful and have perfect bodies. Some of it is ridiculous. No one is as perfect as society tries to hold women up to.

HANNAH: There’s a standard all girls think they have to live up to. The fact is that all of the images [in the media] are computer-enhanced. There have been a lot of blowups from actors who see their pictures in magazines and say, “That’s not me—you cut off 50 pounds!” A lot of girls need to find out what’s inside themselves and not just what’s on the outside.

For those of you who are headed to college, what are you most excited about as you start your new adventure on your own?