My lifelong commitment to my own individuality rendered me incapable of being part of something bigger than myself. 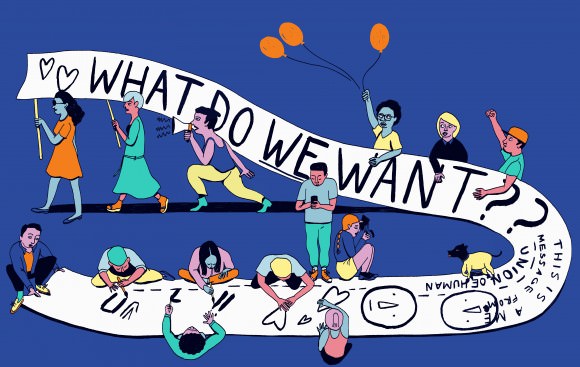 First thing in the morning, the principal came over the loudspeaker with the day’s announcements, then it was time for all of us to rise from our desks, face the flag, put our right hands over our hearts, and say: “I pledge allegiance to the flag of the United States of America, and to the republic for which it stands, one nation under God, indivisible, with liberty and justice for all. Amen.”

But I didn’t want to say the Pledge of Allegiance. I didn’t feel an allegiance to the flag of the United States of America. I didn’t know why I had to say “one nation under God” when I didn’t even believe in God, and most of the people I loved didn’t believe in God, and I wasn’t even a citizen in this nation yet—not on paper, and not when I walked down the street with my friends who looked like me. I didn’t see justice or liberty in the low-income neighborhood I lived in or in the single family house we were lucky enough to share with two other families. Other people on our block had it much worse. All of them were immigrants from China or Korea or Latin America, or they were black. Sometimes I’d go into a 7-Eleven and the dude behind the counter would actually shake his head and say to another clerk, “Look at how many of them there are now. They should all go back to where they came from.” Whenever we’d have to go to the immigration office, we were made to feel diseased, like we were a scourge on this great country.

But what was so great about it? A woman we shared our house with was robbed at gunpoint on her way home from one of her three jobs. Within months of immigrating here, my uncle, while delivering Chinese food one night, was beaten in an alley by six men. My mother lost three of her fingers working (without papers) as a seamstress in the Garment District and had to beg a doctor in the emergency room to reattach them. Everyone around me was suffering like we were, and none of us seemed to reap anything for the trouble except for being blamed for all of this country’s problems.

Why would I pledge my allegiance to a place like that? The only reason I saw to recite the Pledge with the rest of my class was so I could lower my hand to check if my tiny baby breasts were growing at all, so while everyone else was dutifully reciting it, I started mouthing other words: “I pledge allegiance to my itty bitty titties of the United Fakes of America, and to the RePOObics for which it stands, one fart after another, indivisible, with liberty and justice for all. A-women.”

The summer after ninth grade, I went on a cruise to Canada to with my family and a bunch of our friends: 20 kids and 20 parents and 4 grandparents, all Chinese. Most of us had known one another for more than a decade. I was the oldest of the kids, and I had watched them all grow up like the adults had watched me. We were as close as a group of families could be.

I was going through some sort of “phase,” according to the other parents, because I had dyed my hair burgundy with purple undertones and cut it short and sprayed sugar water on it so it was spiky and stiff. My mom and I got into a couple of fights on that cruise because the other moms kept remarking on my hair. At one point, one of them said I looked “unnatural.” My mom was pissed that I tried so hard to stand out.

“Why are you the only one to do this,” she kept asking me.

The adults had a script about us, and it went like this: “They just want to listen to ‘Mambo #5,’” or “They don’t like the Gap anymore, now they all want you to buy them Abercrombie and Fitch.” But I wanted to listen to the Bouncing Souls and Kid Dynamite, and I cut school to take a bus to Queens and the subway into Manhattan to wander around the East Village looking for a vintage store that I had read about in CMJ New Music Monthly. I resented being lumped in with all the other kids. The way we had to do every activity together made me feel like I was in prison. I took to literally running away from the dinner table and finding somewhere to hide until I had to be “one of them” again. I wasn’t even sure if “them” else was a cohesive category; I just knew I couldn’t be part of it.

My high school had a big pep rally every year that everyone was required to attend, and it seemed like my eighth period physics teacher and I were the only ones who found it outrageous that classes were being canceled for sports. I had zero school spirit. I hated competitive sports. I hated competition. I hated shit-talking and the way people actually cared about winning and how arbitrary it was to root for a sports team just because that team happened to be from the town you lived in or the school you went to.

I hated my classmates, too—actually hated them. They would pull their eyelids back in greeting whenever they saw me. They would come up behind my friends and grope their asses as a “joke,” but when one of my friends complained about it to the principal, suddenly our classmates were the ones who couldn’t take a joke. They laughed when our 77-year-old math teacher fell off her desk, and not a single one of them got up to help. They made jokes about Hiroshima and Nagasaki and called me a Jap because “you’re all the same.” I also hated the teachers who loved my classmates and who witnessed their rape jokes and racist comments and bullying and didn’t say anything, and in fact validated and encouraged this kind of behavior and maybe found it funny.

In light of all this, how could I be expected to root for my school to win some football game? When the pep rally was about to start, I attempted to duck into the girls’ bathroom to read a book I had checked out from the library. But as soon as I shut the bathroom door behind me, in walked one of my teachers. I was busted.

“Everyone thinks to themselves, I can’t wait to get out of here,” she lectured me. “But you know what? You’re all coming back here. I did the going-away-to-college thing, and I came right back here to get married and raise my kids. And so will you.” But I wasn’t even from that town. I never really belonged there, and I never would. Then she told me that if I didn’t attend the pep rally, she would put me in detention.