Share this story with 10 friends in the next 24 hours—or you will be very sorry!!! 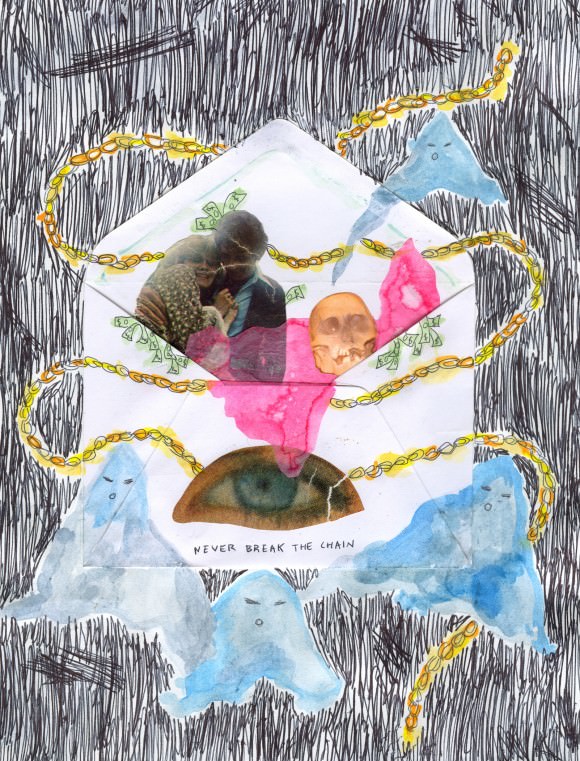 If you forward this letter to 10 people in the next 24 hours, you shall be rewarded with true love and happiness. And also a lot of money, I think? Like, probably more than $25, which is a good score for just sending a bunch of letters out, don’t you think? Anyway, you can’t lose—unless you ignore this letter, and then you’ll die. Most likely. TRUST ME ON THIS. This is the real deal. This letter has already been circulated around the globe 19 times, and about 80 billion trillion people have found true love and happiness as a result. Like Sherman Opal, for example, who sent this letter to 10 friends in 1979 and met his wife, Kimberly, roughly seven years later. Coincidence? NO! It was fated by the letter!

BE WARNED: If you think this is all a bunch of hooey, you’re in for a rough trip! Many tales have been told about the people who have ignored this very letter! For example! The story of Maude Poor, who received this note, called it “dumb garbage,” and threw it away. She was later found in the den of a dragon named Alistair, who kept her as a prisoner forever. TRUE STORY NO JOKE BETTER LISTEN TO THIS LETTER AND DO WHAT IT SAYS!

If you’re still not convinced, maybe the tale of Taylor Finch will change your mind! Taylor Finch was an ordinary girl who opened this very letter on a very ordinary day and decided it was “stupid.” Like Maude, she threw the letter away. Well, she recently ordered a veggie pizza without olives, and it came WITH OLIVES ANYWAY! And all because she failed to forward this letter to 10 people that she kind-of-sort-of knows but doesn’t necessarily like all that much. I would hate to see it happen to you!!!

Maybe you still think you can get away with carelessly tossing this letter—and the great power it holds—aside. Well, you can’t! You absolutely MUST forward it to 10 people within the next 24 hours, or you may risk a fate worse than olives: DEATH! Legend has it that at least seven people who failed to follow this letter’s instructions died at the hands of a monster-witch-ghost named Rowena Gordon, who was born in 1382 and died in 1400 after failing to copy THIS VERY LETTER on 10 separate pieces of parchment and deliver them to 10 different people in her village within 24 hours.

Rowena died, it is said, after being struck by lightning just four days after she tossed this letter into the sea, claiming that it was “dumbeth garbageth.” When they tried to bury her, she rose from her coffin and jumped off a cliff into the sea, then rode off on a demonic dolphin named Willem. She still haunts the oceans to this very day! If you listen closely, you can hear her moan: “Whyyyyy didn’t I just send that letterrrrr to 10 acquaintancessss or distant relativessss?”

This is all true information. But do not be frightened, dear letter recipient! If you follow these instructions, you’ll be fine! And good things will come your way! Mrs. Claudia Summers, of Europe, forwarded the letter in 1997, and just two years later, she won $10 on a scratch-off lottery ticket! You don’t luck into that kind of cash flow without obeying the power of the letter! Its magic is REAL! I swear!

Look, beloved friend. I know you. I know your heart! And I know that there’s a pretty good chance you’re reading this letter right now and thinking, That’s all well and good, but I’m not going to send this chain letter on, because the unspoken rules of the universe do not apply to me! Think again, beloved friend! The rules DO apply to you, and if you don’t heed my warning, you’ll be very sorry! The sorriest!

Of course, I understand that in today’s busy society, it’s a lot to ask someone to take the time to send 10 letters in 24 hours. I know what it’s like when the rigors of everyday life—cleaning the tub, exercising the toes, eating cake—become overwhelming. There’s a lot of living to do out there, and stopping the madness to sit down and write 10 very important/possibly life-changing letters is a tall order. I GET IT! I really do. And that’s why, if you’re still reading (and if you aren’t, you’re doomed), I’m going to offer you a compromise: I’ll send your 10 letters for you for the low, affordable, totally decent price of $59.99. That’s less than $6 per letter! It’s a bargain that will save your soul, so I hope it’s a price you’re (literally) willing to pay.

Still on the fence? What would you say if I threw in a free tote bag (quality may vary) and an invisible shield to protect yourself from bad vibes and such? (Invisible shield not visible, but I swear it’s there—no returns or refunds.)

Beloved friend, I know this letter has found you at the most opportune time. You are searching for something, aren’t you? Maybe it’s happiness, or maybe it’s love. Or maybe it’s for the return of those Nestlé Crunch Crisp bars that you just can’t find anymore, or maybe it’s Grand Theft Auto V, which I STILL DON’T HAVE because I spent all of my video game money on Chewy Spree and SweeTarts at the school store.

Whatever you’re looking for, I know it’s important, and I also know that you’ll NEVER get it unless you do what this letter says and/or pay me roughly 60 bucks to do the work for you. This is the biggest decision of your life—right up there with naming a cat and picking a go-to lip color! DON’T MESS IT UP!