Last month we talked about the advantages of solitude. Here, a few words on its limits. 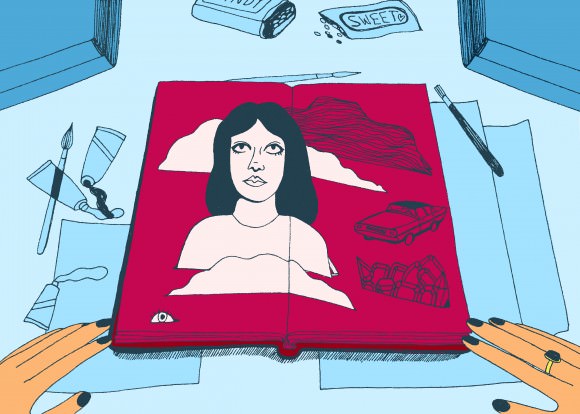 C: When you’re living so intensely in your head there isn’t any difference between what you imagine and what actually takes place. Therefore, you’re both omnipotent and powerless.

C: No, they’re so far in there’s no difference between the inside of their heads and the world.

Sometimes I get the feeling that I’m living two separate lives. One that’s all in my head, and another that’s me out in the world, being funny or friendly or bitchy, bouncing off other people in a million and one ways. The me in my head is quiet, serious, and not willing to apologize for that. She is also anxious, obsessive, and unyieldingly ambitious (not always a positive thing). Sometimes I am so tired of her, and this usually means I need to put down the laptop, change out of my pajamas, and go join the rest of the human race IRL.

Being alone with yourself is tricky. Sometimes I fantasize about it, especially after a rough day of teaching. Other times I romanticize it: If only I could be totally alone, I would accomplish so much. But I am not interested in romanticizing aloneness, at least right now. This year, I have been very alone. I mean this dramatically, of course. The way Thoreau meant it when he was chilling in his friend’s backyard. Or the way Annie Dillard meant it at Tinker Creek. I have some friends. I’m not on a desert island conversing with a volleyball (poor Wilson). I am, however, teaching English in a small Polish town near the Ukrainian border. (Background: My parents are Polish and moved to the U.S. some years before I was born. I’m here to learn their language better and also to write about our lives here and there.)

I had this idea that a change of scenery and an escape from the post-college pressures of job-hunting and résumé-building would be good for me. That somehow in another country all my bad habits (too much TV, too much scrolling) would fade, and I would be able to focus on my writing. Alone with my pens, paper, and books—have I done much more that I would have otherwise? I don’t know. But I have learned a lot about aloneness and loneliness.

When I was 12, my favorite book was The Ashwater Experiment. It’s the story of a girl, Hillary, who travels around the U.S. with her hippie parents. They settle down for short periods of time in one town or another, and then keep moving. Obviously, Hillary spends a lot of time alone. She begins imagining her life as a Truman Show–esque experiment someone else is conducting. She calls the people she imagines running it the Watchers and tries to test the limits of their study (i.e., her world). She throws open doors and slides out drawers quickly, hoping to find some yet-unmade part of their project. She imagines the space in the drawer as a void before she opens it—blackness, nothing—that gets filled in a split second with socks and underwear (props) the moment she chooses to pull it out. Looking back, I can see that all this meant that Hillary was spending too much time in her head, but at the time I felt like Hillary’s imaginary world was a perfect illustration of the divide between in-my-head and in-the-world. There were times when I’d feel like I was watching myself laugh or talk and feel like the person I was at school or with friends was a completely different me. Not that I was faking it, more like there was some secret part of me that never seemed to make it to the front of the stage. The world between my ears when I’m not talking or doing something is one of rushing thoughts, trembling ideas, and lots and lots of to-do lists. Sometimes when I don’t like someone or can’t relate to them, I think about what they must be like alone, brushing their hair or sitting on a bus, physically there but with all their energy focused inward. I think about all the weird, conflicting stuff that goes on in my own head and instantly feel more sympathetic toward them.

That’s why reading is so weirdly contradictory to me. It’s a thing we mostly do alone that helps us understand other people by showing us the insides of their heads. I’m usually hypercritical of myself, and reading is a kind of assurance that other people have the same worries and hopes and strange feelings that I do. When I was younger and too shy to ask questions about sex, love, and other gross things about adult life, I turned to books. In them, I read bad advice and questionable advice and things that were probably inappropriate for my age (Cosmo) but I was just curious to see how other people had dealt with the things I had begun thinking about. I probably shouldn’t have been doing all this research when I was supposed to be volunteering in the children’s section of the library, but between the stacks, looking up orgasms or virginity or whatever it was that day, what I found was enough to allow my anxious brain a sigh of relief as I realized, OK so I’m pretty normal.

Some of the best things in our world are products of aloneness, of imagination. The story ideas I have just before sleeping. The drawings I would be too embarrassed to do if someone were with me. The amazing cool various shit I have found on the internet because I am bored and alone. But I promised I wasn’t going to wax romantic, so I won’t forget to write about loneliness. For me, loneliness feels less like sadness than it does a weird circling anxiety fogging up my brain. It manifests as checklists and irrational fears, like when I called my mother long-distance after reading an article about the side effects of the HPV vaccine I had just gotten and could barely breathe. “When’s the last time you went out?” was her first question. My boyfriend knows that if tell him I just watched an entire season of Homeland in two days it means I’m not feeling too hot psychologically. Ditto for when I’m online so long I get that weird electric buzz in my brain. You know the one?

I guess what I’m saying even as I’m pitching you this idea of two different lives is that you kind of have to keep the drawbridge down, you know? If you lose yourself inside your head it’s no good. It’s just as bad as losing yourself to the pressures of the outside world (bad influences, peer pressure, other peoples’ expectations). There’s got to be a healthy flow between what’s inside your head and what’s outside in the world, or else both of the yous I’m talking about can be lost.

My friends here in Jarosław, the Polish town I’m living in, are from all over—Turkey, Spain, Ukraine, even Uzbekistan. We run into one another in the communal dorm kitchen and go out together every Thursday night. But I do most things on my own: cooking, cleaning, sleeping. I dream of going food shopping with my long-distance boyfriend, or, like, kissing him. Sometimes with Skype, Gchat, Facebook, Twitter, Instagram, etc. it almost feels like the distance shouldn’t count anymore, but then there are those times when it’s the middle of the night U.S. time and my Facebook is quiet and I realize just how far away the ones I love are. You know that Louis C.K. bit about being alone? Yeah, those are the times that I have to face my aloneness, when it becomes a thing altogether less pleasant than those afternoons I spend by myself on the roof outside my bedroom window, under the trees, but still only a pane of glass away from my family. Now I wish there was someone to watch the pot when I have to pee and I’m afraid to start a fire on the shoddy hotplate we use for cooking in the dorm.

But for the most part, I got what I wanted coming here. I do have time to write. My journal has more full pages than empty ones (rare for me), and I’m reading lots. My inner and outer lives are on the same page for once. The goals and dreams inside my head are being followed up by my actions IRL, and that feels important. Because when we’re talking about these two selves, the inner and the outer, we’re also talking about our past selves (the many many of them—remember the you that thought kissing was gross?) and the amorphous future selves we dream of or dread becoming. Many of these future selves we’ll come up with in those precious hours alone with our papers, pens, and books in hand. And they will keep us company, for a time. ♦