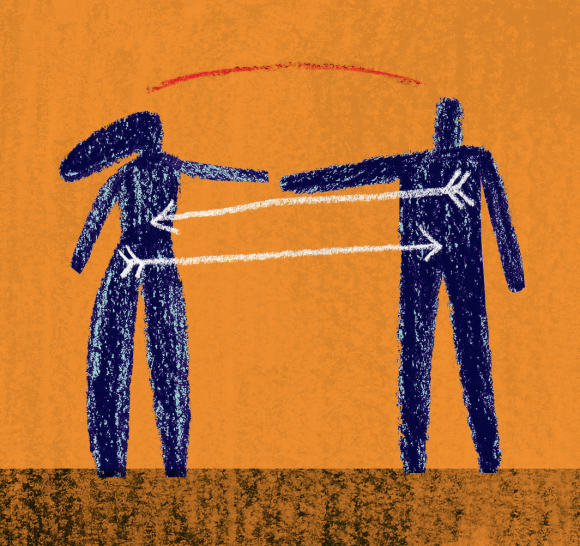 There are a few reasons I never fulfilled my teenage dream of being in a band. I tried to start a few bands, but none of them really got anywhere, which was partly my fault. I had a guitar, but I barely ever practiced playing, so I never improved. Also, and possibly worse, during the few rehearsals we had before disbanding, I was too nervous and self-conscious to ever share any of my ideas. I enjoyed tinkering around in my bedroom, working out melodies and chord progressions, but as soon as I had an audience, however small, I turned totally passive, just playing what other people told me to play. Showing them my ideas felt way too vulnerable. What if they didn’t like them? I’d feel rejected and embarrassed. But how was I going to be in a band if I couldn’t even play to the band? I wasn’t, was the answer.

Happily, I’ve grown a thicker skin since then. These days I’m fine with showing my writing to other people, even people I haven’t met (e.g., you). But writing is easier than making music with a group, because the actual act of it is something I can do alone. The idea of collaborating on any kind of art project still scares me—I can’t stand the pressure of having to come up with ideas in the moment, in the presence of another human being. Creative work is such a deeply personal thing for me that when I think about how other people open up that part of themselves to one another is unbelievably intimate and terrifying—and therefore completely fascinating.

All of this is why, when I first heard the story of Marina Abramović and Ulay (the artist name of Frank Uwe Laysiepen), I was simultaneously intrigued and slightly repelled. The two performance artists met in Amsterdam in 1975, when a gallerist sent Ulay to pick Marina up at the airport. In a documentary about Marina, Ulay said, “There was immediately a fascination…like we have found a lost brother or lost sister.” They even had the same birthday: November 30. Marina explained their connection this way: “I loved him more than myself.”

They fell in love and created art together for 12 years; all the pieces they co-produced (about 90!) had something to do with their relationship: how they understood male–female relationships, romantic relationships, and how bodies interact with each other. Their work was about togetherness, in other words, but not just the cozy kind. In one of their pieces, Imponderabilia (from 1977), they stood naked, facing each other, in the doorway of a museum; this meant anyone who wanted to enter the building had to pass between them.

In AAA AAA, made a year later, the artists made sounds at each other with their mouths wide open, getting louder and louder until they were yelling in each other’s faces.

Their personal lives were just as intertwined as their artistic ones. For a five-year period they even lived out of a black van, traveling across Europe, with no stable home to call their own.

The idea of standing naked facing someone—even a lover or partner—staring at each other while strangers brush against you is impossibly scary to me. Not only are these two people totally exposed to each other on a very basic level, they’re bare to the whole entire world! I don’t think I could do it, could you? And while there’s something about yelling at someone in a formal artistic setting that seems really appealing and freeing, it also seems potentially embarrassing. Just the tiny bodily possibilities, like accidentally spitting on the other person or allowing them to smell my breath as we move closer and closer to each other’s faces, freak me out. The bigger implications fill me with pure terror: stripping away my inhibitions to loudly express pure aggression, anger, and frustration. I would feel like a totally different person, and that is not a comfortable notion to ponder.

The intimacy of Marina and Ulay’s work is profound. They weren’t afraid to hurt each other or explore in depth what it meant to be part of a duo. While it’s wonderful to have the love and support of another person, being together can also mean being bound to someone, for better and worse. For their 1977 piece Relation in Time, the pair were tied together by their hair; they sat like that for 17 hours.

When you open yourself up to someone to this degree—when you show them all of your softest, most vulnerable, most human parts—you give them the power to hurt you. This is what makes Rest Energy (1980) their most frightening work for me. In it, Marina holds a bow while Ulay holds the arrow—pointed at her. Each pulls at their half of the weapon until the arrow is tensed to fly. It’s a powerful representation of the extreme trust and risk inherent in any deep relationship. It feels threatening, and very very real.

Eventually, Marina and Ulay decided they couldn’t be together anymore, which for them meant they also would no longer be working together. To commemorate their separation, they performed their final, epic work, called The Lovers, in 1988. For this piece, they walked toward each other from opposite ends of the Great Wall of China, met in the middle, and said goodbye. The Lovers struck me as so ritualistic, dramatic, and wise. So often we break up with boyfriends and girlfriends on a whim, or in an unbalanced way, where one person has had more time to think about the decision than the other (though I know that’s often the right or only option for the couple at the time). Marina and Ulay’s journey demonstrated a kind of equal participation in their breakup that was also, in a way, a celebration. As far as I’m concerned, it is one of the most thoughtful and eloquent break-up stories of all time.

It also led to an extremely moving artistic reunion 22 years later, when Marina was performing her piece The Artist is Present at the Museum of Modern Art in New York. For that piece, Marina sat in a chair and invited people to sit in a chair across from her and just stare at her as she stared back at them. On the opening night of the performance, Marina lost her composure for a moment when who showed up in the empty chair but—yes—Ulay.

Extreme artistic actions like the ones Marina and Ulay created together aren’t for everyone. And as artists, neither of them should be defined only by the work they did together. (Marina, in particular, went on to become very well known for her individual performance work.) But I love the way their work illustrates the tensions and the potentials of togetherness. I love these artists for reminding me that being with other people isn’t always easy. Being with someone means thinking about it, stretching the ideas of it, and growing together—even if that means you eventually grow apart. ♦