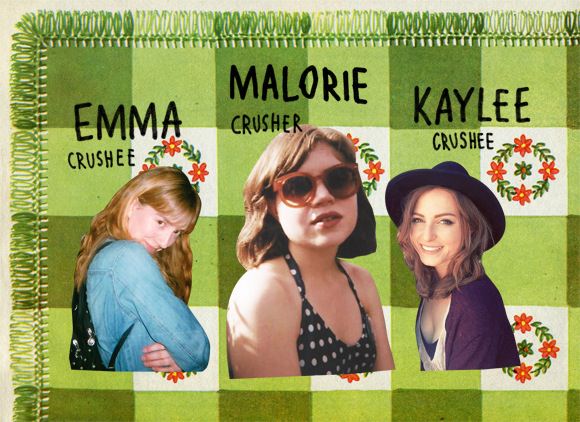 Malorie, Emma, and Kaylee are juniors at the same high school in Southern California. When they’re not in the Del Taco drive-thru, you can often find them with their arms linked together in the mosh pit at a Cherry Glazerr show. They are the queens of one another’s hearts, and they have won ours over, too.

I have two incredibly cool friends. Their names are Emma (she’s 16) and Kaylee (17). The three of us (including me—I’m 16) are the Three Burritos. We are an unstoppable, powerful mini-girl-gang. We became friends after bonding over music, movies, and clothes; discovering new bands and places to adventure to; and realizing we all really like stripes. We like to dance around to ’50s music, eat ice cream, talk about feminism and interesting people and places, and go to Denny’s.

I have the biggest friend crush on Emma and Kaylee because they remind me to be myself, and they inspire and motivate me to do things like make art or cut my hair off or whatever I want to do. They are the very best, and I could not have picked only one of them as a Friend Crush. We cannot be split up. It would be like a burrito from anywhere besides Del Taco—it doesn’t cut it.

ROOKIE: How the name the Three Burritos happen?

MALORIE [crusher]: We eat burritos together often, and one day we were driving around and we were just like, “We’re the Three Burritos.”

How often is often when eating burritos?

Do you know Emma’s and Kaylee’s burrito orders by heart?

We go through the Del Taco drive-thru, and bean-and-cheese is 99 cents, so that’s what we all usually go with. Kaylee is strictly bean-and-cheese, but me and Emma go super veggie if we have the option.

How did you all become the unit that is the Three Burritos?

I was talking to Emma and Kaylee [earlier this week], and I was super anxious about this interview. I was like, Oh my god, what is she going to ask? When did this friendship start? How did this happen? I’ve kinda come to the conclusion, in trying to pinpoint when we really bonded and became true best friends, that it was when we were going to an Orwells concert in L.A., and…well, we were attempting to go to an Orwells concert in L.A. Things happened, and there was traffic, and we decided to turn around because there was no way we were gonna make it. And so we ended up going back to our town, and there was a basketball game or something going on at our school. We didn’t know where else to go, so we drove to school and parked in the parking lot. No one was outside, and we blasted Orwells songs and danced around until people started exiting the stadium. I think that was the moment we became the Three Burritos. The song “Never Ever” still reminds me of that night. Every time it comes on in the car, we look at each other. It’s a tender song for us.

Aside from getting burritos, what are some of your group rituals?

After that moment—that was the beginning of sophomore year—we spent all our time every weekend at this local DIY/art/music/community place in our town. We would volunteer and listen to music all the time. But now we drive to San Diego or L.A. for concerts if we can. 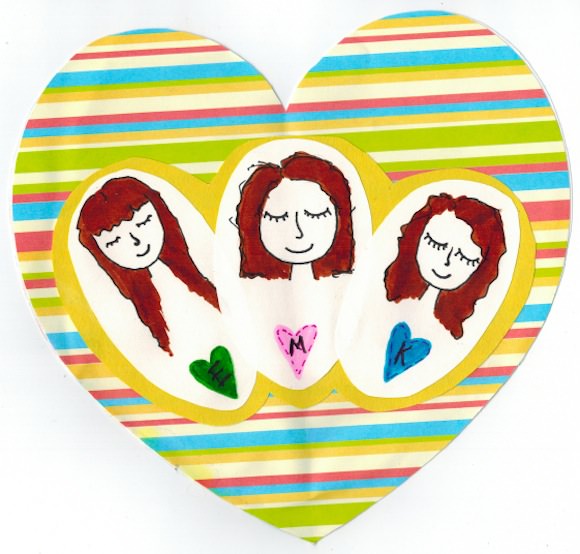 The cover of a mix Malorie made for Kaylee and Emma last summer.

Have you guys ever made music together?

No, but we’ve talked about it from the start. It’s never really happened—but it’s going to. Emma and Kaylee have gotten guitars. I haven’t gotten an instrument yet. It’s a slow process, but it’s gonna happen.

How are Kaylee and Emma different from each other?

Well, can I start about what I love about both of them?

I love them so much because they made me realize the importance of having support and love in your life and not having to be with negative people. Before them, I always had friendships where there was drama and stuff like that. There’s nothing but support with us. Seeing our relationship and how much it has benefitted me as a person, I want to tell everyone: Choose your friends wisely. They push me to be a better person and to be myself all the time. Emma, at the beginning of the year, motivated me into choosing to take AP English, which was a super scary thing for me. Throughout the year, they both kept saying, “Yeah, you can do this!” They would constantly remind me that I’m a good writer, and I got through it.

What makes you love Emma in particular?

We’ve gotten closer this year than ever before. I appreciate my relationship with her so much because she’s someone who, no matter what I am trying to say, understands. We have the same point of view about a lot of things, like feminism and style. Someone told Emma and me that we look like hot moms, and that pretty much is the definition of our style, because we both wear mom jeans and overall-type things.

What makes you love Kaylee?

There are some things, like family-type issues, that Kaylee understands more than anyone else. She’s also really particular about pretty much everything. Like really random things. There was this one song that Emma put on a CD for Kaylee, and Kaylee later told us she didn’t like it because she thought it sounded too much like Lou Reed. We were like, “What are you talking about! You love Lou Reed! The Velvet Underground is your favorite band!” And she was like, “No, this is just a ripoff.” She’s a little stubborn.

We used to say that Kaylee’s one way, Emma’s the other way, and I’m half of both of them, which is why our relationship works so well. Emma’s very…OK, I’m going to put this into stereotypes because I don’t know how else to define it: Emma’s very much the surfer, California girl. She loves the beach, and…fruit. Kaylee is content with never seeing the sun and wearing black every day. Emma’s like, “I neeeeed to be in the sun! And why doesn’t my room have any flowers in it?!” and Kaylee’s like, “I can’t have plants because I will kill them all, and the sun hurts meeeeee!”

Other than the Velvet Underground, what’s Kaylee’s favorite band?

Is there a Three Burritos theme song?

Ask them that question!