We premiere their ferocious new song, and talk to frontwoman Mish Way about writing, body image, and how boyfriends can fuck with your creativity. 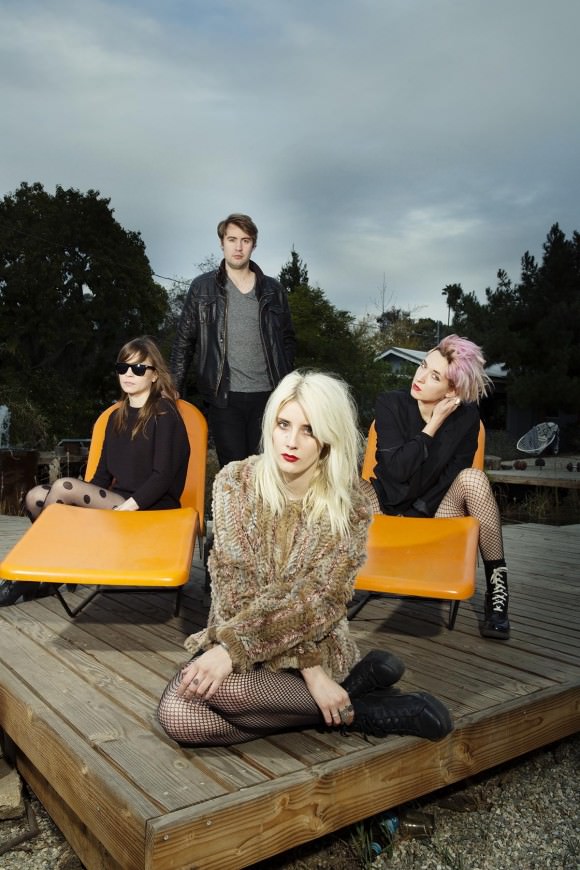 Mish Way, the frontwoman of the band White Lung, is a windstorm. Anything inside you that isn’t tightly bolted into place is going to be unmoored by the sheer power of her talent and curiosity. In her writing and her music, and even just in conversation, she is 100 percent full-blast inquisitive and electrifying, always ready to upend her own ideas if they can’t hold up to radical exploration.

Her band is just as ferocious. Their music sounds like an ongoing grand finale of explosive pounding and power shredding that holds up to Mish’s lyrical universe of feminist ethos, hedonic carnality, and everygirl insecurity. It’s all extreme shit.

Here, we premiere “Snake Jaw,” off White Lung’s forthcoming album Deep Fantasy, out June 17 on Domino, and learn a little bit about what makes her so very rad.

LIZ ARMSTRONG: Where are you in the world right now?

That’s right, you have a boyfriend now.

You recently wrote about how having a boyfriend was hindering you creatively, at least with your writing.

I wrote so much last year about my sex life and about what a giant failure it was. I was just reveling in the comedy from all the bad sex. Now that I’m happy, I’m like, Shit. It’s too new. It’s too special.

You write so hardcore about your sex life, your romances, your feelings, your opinions. Is there anything that you’ll never talk about?

Oh, yeah. Everyone’s got like a million dimensions, and there are certain things that I’m not even ready to confront myself. It’s weird developing a persona and having it exist as an extension of yourself.

How do you decide what goes into your music and what goes to your [prose] writing?

This year I had written pretty much everything that I would want to write about under the sun. So I had to find ways to reformat my personal experience and make it more of a universal topic. But with songs, you don’t have as much time. There’s a melody you have to stick with and you have to work really hard to figure out exactly what you want to say. You can Bukowski out and just go for days, you know, and be really reactionary and be really spontaneous, but I didn’t get to do that on this record.

Since most of your work is so personal, I’m wondering if “Snake Jaw” is autobiographical.

That song’s about body dysmorphia and its residuals. I feel like I there are two women battling in my head sometimes: my completely confident self who can tell anyone to fuck off at the flick of a finger, and this other woman who hates herself, her body, and her mind, not because she actually hates herself, but because she has been told by her culture to hate herself for not being MORE, BETTER, THINNER, PRETTIER. Being crippled by a hatred for your own body—why? How did that happen to our fucking culture?

Maybe it’s too far gone to even answer that? And now we just try to figure out how to deal with it.

“Snake Jaw” is about the fact that women—myself included—still struggle so much with the idea of what we’re supposed to be and what we’re supposed to look like, and how that pertains to our sexuality, our power, our attractiveness, and even our intelligence. It’s that battle we’re constantly fighting. We live in a country where women go to bed hungry, not because they don’t have anything to eat, but because they’re worried about getting fat. That is fucked up.

It’s interesting that you would struggle with this. You seem so strong and accepting of everything about yourself all the time! Yet I read something where you said that you had to work to love your butt. So I was wondering if the song was in a certain way an ode to learning to love your butt.

Yeah, I do love my butt now. I used to hate it. I have a giant butt. It was from figure skating—you’re all bottom half when you’re a figure skater. I grew up doing that very competitively. It’s a sport where you are judged not only on your athletics, but also very heavily on your appearance and your body. I have those little tendencies inside of me that stem from growing up in that kind of situation and having that [pressure] jammed down my throat from the age of 5 to 17. Now I own it, but certain days you wake up and you don’t feel so amazing. I’m not going to pretend that I feel perfect all the time about something even as trivial as like what my body looks like. But I think it’s important to discuss it and be open about it and talk about it and work through it. It took me a long time to be happy with my body, to love my curves, my ass, my womanly physical self and I really take a lot of my personal sexual power from that place and use it to make myself feel human. That’s another part of what this song is about—about the realization of my physical self. For me songwriting has always been about being able to work through things that I can’t conquer logically on my own.

Besides songwriting, what other ways have you learned to work through stuff?

I started off my university degree in creative writing, and then I took a feminist philosophy class, and my world suddenly made sense. I was like, OK, forget it. This is what I want to study. I can write on my own. I changed my major and focused solely on [feminism]. I wouldn’t be what I am today and I wouldn’t be half the woman that I am if I hadn’t discovered feminism. It’s my entire existence.

What is feminism for you?

To put it really simply, all being a feminist means is that you don’t hate yourself. And I would take it a step further and say that [it means] you don’t hate yourself because of your gender, and that you actually love and understand the world better because of your gender. Of course, equality is important, but for me, being a woman in this world gives me a certain perspective, and I really appreciate and respect that, and want to use that to my full advantage.

You recently wrote about sexist comments you get on the internet, particularly the word whore, which was used against you. When people call you something like that, what do you think they really mean?

Eventually the guy who said that to me apologized. He was like, “I guess a woman like you really makes me uncomfortable because I had so many reservations about my own sexuality. I was raised in this kind of environment and I’m still a virgin and I feel a woman like you that’s very open about it all makes me feel a little intimidated and scared, so it’s easier for me just to call you a whore.” We ended up having this discussion about it, which was kind of cool.

So he called you “intimidating.” I have a feeling you hear that pretty often.

Yeah, I get called that all the time.

What does that feel like for you to hear that? To me it seems like a power thing. Like, you must seem more powerful in some kind of way, and a person becomes scared of that.

Depends what day, and what time of day it is. And what I’m doing. Sometimes I feel completely in control in my life and exactly what’s going on and other days I feel at a total loss of control. I think that’s just being a human. ♦

A hoarder of three dogs and tons of crystals, writer Liz Armstrong believes in Nature’s Miracle—both the magical events of life as we know it and the product that gets animal pee out of blankets. Follow her words through her site or on Twitter.