I will be untouchable. 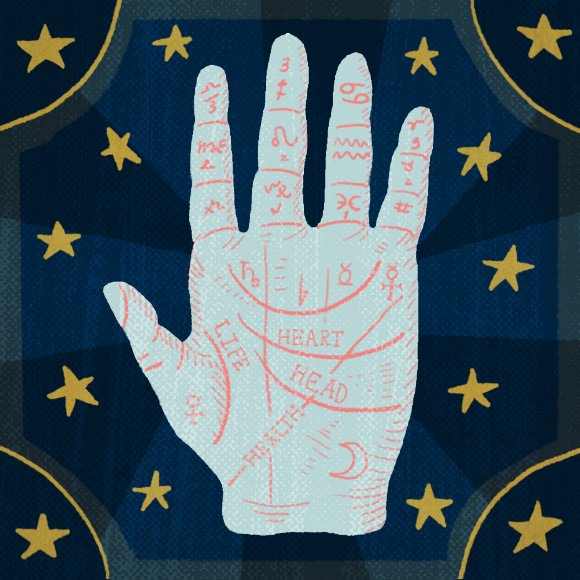 We moved to Wild Woods, Virginia, two days ago, just up and left our former lives, drove 100 miles on I-81, carrying everything in the trunk. Momma crooned to Carole King on the radio, and Papa drove 85 miles per hour, tapping his thick fingers on the steering wheel. I sat in the backseat and pretended not to worry. This was another one of Papa’s lies. We weren’t supposed to move again. We moved often enough that all the places blurred into each other and friends lost track of my changing addresses and phone numbers. But then he was offered a job at Wild Woods Community College, teaching English, his dream job, a real job after being a sales clerk. So we left.

Momma: Bails, remember that time you—

So it’s a new year. Whoop-de-doo. Soon I have to go to school. A new school. Wild Woods Middle School for Leadership Studies. It seems like everything in this town just has to have the town’s name in it.

Dr. Scott says that writing in my journal will help me deal with things, but I’m not really sure what kind of “things” he’s talking about. Whatever they are, the journal is supposed to help me express them. Today I did nothing except unpack two suitcases full of clothes, random magazines, my beloved collection of nail polishes (17 total), and a stuffed bear from when I was a kid, which I creatively named Teddy.

And then I worried. I thought about the time Momma wouldn’t wake up one morning, three days before we left, even though it was noon and we needed to pack and the electricity was shut off early, by accident. We shook her and shook her, and I could have sworn she was awake the whole time, but then only an hour later she opened her sapphire eyes and her crinkled lips and whispered, “It’s so cold, Bailey, give me another blanket, would you?”

I tried to make myself stop thinking. I turned on the radio and listened to NPR because that’s all Papa listens to, and I couldn’t find the cool stations. A recent study suggests that teenagers who go to bed late are more likely to develop depression or to have suicidal thoughts. Five minutes later: Despite the stress of the holidays, studies show that the rate of suicides does not increase during the holiday season. I turned the radio off.

Momma: Jesus, Bailey! Would you stop complaining about school? You don’t think your Papa and I got problems here, too? Go unpack in your room.

I was terrified the entire day. All the girls in tight jeans and perfectly straightened hair. All the boys with their flippy hair and baggy pants. And the bell. As soon as it rang, everyone rushed out of class, and all I could hear was the typical boring chatter of How was your Christmas/Hanukkah/holiday/vacation?

I thought people would at least wonder about the new girl in the back of the classroom. The one with a name better-suited for a dog or for a creamy, Irish alcoholic drink. The one with ghostly skin and hair like black ink. No. Turns out if you’re new in middle school, nobody actually notices you.

And then I got to English class.

At the beginning of English class, sitting down in the third row on the right. Me, wearing my favorite pink-striped shirt and light-washed jeans. Next to me, an unnamed blonde girl with very perky eyes and gigantic, blue wire-framed glasses:

Teacher: All right, everyone shut your mouths, and open the books on your desks to page three.

Sarabeth: I can read your palm!

Sarabeth: It’s OK! I’ll show you after class. I just got this new book on spiritual readings!

Teacher: You two! Shut it! 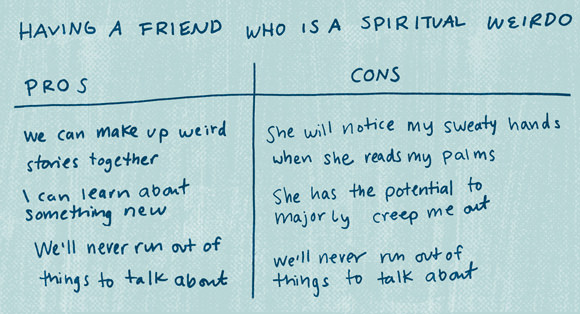 One of the stupid things about Wild Woods, Virginia, is that it’s neither wild nor in the woods. I asked Sarabeth about this, and she said that it’s because there’s some old story about the town being completely filled with trees and bears and all kinds of ferocious creatures, but then the colonists came by and took it all down. I decided to believe her.

Momma and Papa like Sarabeth enough. They told me that she’s nowhere near as funny as me, but she’ll do with her palm reading and her obsession with that boy named Tommy.

Tommy. He’s so beautiful I want to crush my brains when I think of him. That sparkling chestnut hair, those olive green eyes. And the way he flips the hair that grows long over his forehead, how his muscles flex every time he moves to write something down in science class, and how he half-grins—he never fully smiles. Sarabeth and I both love him, and we’ve agreed that if by some miracle he actually notices one of us, the other will relinquish her love for the sake of our best friendship.

Me: Well, thank goodness I won’t be run over by a truck anytime soon.

Sarabeth: Heart line…ooh, two loves, cute, Bails, wonder if one of them is Tommy…

Me: Shush your mouth! As if he ever notices me.

Me: Stop it, your fingers are tickling my palm, and this is all bullshit anyway.

Sarabeth: Bails, I can’t believe you would say that! 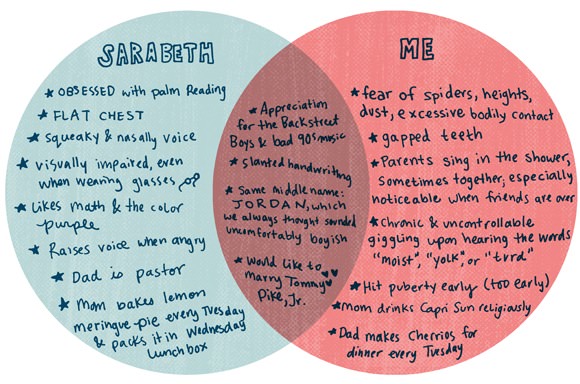 In our leadership class at school, our teacher recommends that we get internships some day in a field we’re interested in. When Papa hears about this, he has a little bit of a hissy fit:

Papa: Whatd’ya think you need an internship for? Hell, if there’s anything this country needs, it some down-to-earth young people taking up jobs at the five-and-dime, learning what life really is.

Me: Then there’ll be too many people—

Papa: If these damn politicians just got a slice of life, a slice of real life, man, this country would be a helluva lot better.

I tried to ask Momma about the internship, but she was sleeping again.

Yesterday, Sarabeth came over to my house, and we did make-up together and painted our nails. Everything seemed normal. I painted my fat nails coral and she did her teeny, delicate nails jade green. We talked about how Tommy was the cutest boy in the seventh grade, and how if Eliza B. Samuels ever broke up with him, we were most definitely going to pounce on that.

We were just laughing about Tommy, and then Sarabeth got quiet. She reached up to my face to wipe some blush off with her cold fingers, and then she dragged them down my cheek, like swiping a switch, pulled her fingers across the bone of my jaw to my chin, then down to my neck, lingering for a moment. She moved closer and pushed me back gently against the wall, her hand against my sternum, and then on my breasts. The buttons on my shirt were undone. I could feel those frigid fingers circling and pushing, then touching my body, like uncharting a map, bringing her fingers down my stomach, causing me to shudder—I didn’t want to—my body shook, slowly, uncontrollably, until her fingers were there. There. There.

I froze. And then I started screaming. I can’t remember what happened, what I said, how she left—all I know is that I couldn’t stop, and there was something loud inside me, something savage just forcing itself out of my throat, and I couldn’t control it.

Today was the first day of spring break, and I went outside for a walk. Momma and Papa stayed at home watching TV.

As I stepped onto the cobbled path, my boots squeaked against the ground. I had no idea where I was going.

The world was falling around me, the snow ghostly and dancing, flitting through my eyelashes before settling on the ground. I thought of her hands, their precision, their dainty size, the way they pushed and pulled my skin like she knew exactly what she was looking for. Heart line, life line, the love lines. It was cold and my fingers were tingling. I passed her house. It was daytime, but the lights were on, and I imagined her watching me. This time I would be defiant. I would be untouchable. I just kept walking. ♦

Jessie Li is a writer and a student at Davidson College, where she is the founder and editor-in-chief of Her Campus Davidson. She loves pears, poetry, pretty things, and faraway places.