If no one notices me, do I even exist? 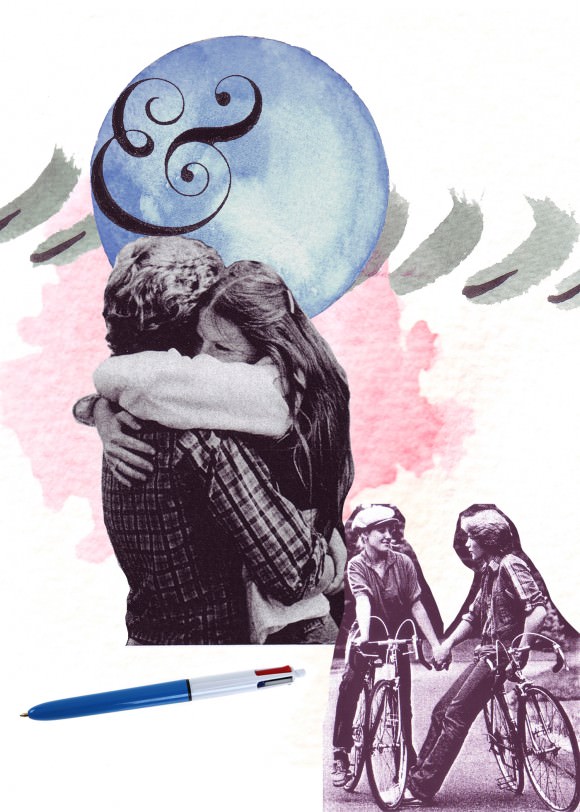 I’ll never forget the first time a guy flirted with me in middle school. Mike, a kid that I kinda knew, came up to me in class, smiled at me shyly, and gave me a cool neon pen that wrote in four different colors.

“What’s this for?” I asked, confused.

“Nothing,” he said. I felt my heart racing—I’d seen other girls in my class flirting with boys, turning them into their boyfriends, and sometimes even kissing them, and I had long wondered if those things would ever happen to me. When Mike presented me with this token of his affection, it seemed like it might finally be my chance to find out what that kind of romance was all about. I was beside myself with excitement and nervousness, like I was peeking into a great and lovely unknown.

I spent the rest of that day examining Mike like he was a science experiment. Did he like me? Did he love me? Or did he just think I needed something to write with? I analyzed every single interaction we’d ever had, searching for clues as to how he felt about me, and watched whom he interacted with during the rest of the day, trying to figure out what I had in common with the girls he talked to. These observations revealed nothing aside from the fact that everything Mike did was pretty amazing. I didn’t know what I’d done to earn this pen, but I wanted to find out, so I could do it again.

That night, a friend called to tip me off: I needed to tune in to a local radio station that took caller requests. I sat motionless, holding the radio in my hands, until the corny DJ announced a song dedicated “to Emily, from Mike.” The band was Nelson, a hair-metal band that played rock ballads; the song was “Love and Affection.”

LOVE. AND. AFFECTION?! I was a goner. Starting the next day, when we awkwardly said hello to each other at school, then locked our clammy hands together, I made being Mike’s girlfriend my full-time job. I mentally archived every conversation we had and took exhaustive notes about his preferences in a journal that I kept solely for figuring out the whole romance thing. Any time he complimented (or even commented on) something I did, I made his comments into my bible, and I was devout. Once, he mentioned that he liked my hair in a ponytail. I wore my hair in a ponytail for days on end, swinging it around in front of him as if to say, “See, I paid attention!” This did not increase the compliments, but he didn’t seem to hate it, either—I took notes on that, too. Looking for Mike’s approval wasn’t limited to dictating what hairstyles I wore: I would do anything to experience how amazing it felt to have Mike smile at me. When he looked at me, held my eternally sweaty hand, or kissed me, I felt like a worthwhile human being, and feeling worthwhile was a whole new experience for me.

Throughout my teenage years, I didn’t like myself very much, and I was too obsessed with my own insecurities to appreciate how I did in school, my friendships and family, my love of animals, or anything else I used to adore. I clanged around loose in my own brain like the last Tic-Tac in a pack…until Mike smiled at me. I felt seen, and it felt good. Oh, I get it, I thought. That’s why people like dating so much: It’s how you become a person. Having guys find me attractive was the only thing that made me feel wanted, and I would do anything to sustain that feeling. I would make sure they loved me. Because if someone else could love me, clearly there was something in me that could be loved—even if my personality was specifically tailored to their interests, instead of my own true feelings.

For many years after my time with Mike, I treated relationships like lost-and-found bins where I might come across myself. The complicated and gorgeous feelings that were sparked by being with boys made me feel more alive than anything else ever had. I abandoned female friendships and made my boyfriends into my new besties. I clung to guys who didn’t always treat me wonderfully, grateful to be seen, sometimes carrying drum equipment into and out of venues while my boyfriend flirted with other girls. I felt pretty only when boys told me I was pretty. I quit dance class, something I’d been doing for five years, in order to devote more time “to myself,” meaning “with my boyfriends,” who dictated my entire personhood: Was I into [a popular TV show]? I don’t know, is Tyler into [that same TV show]? Was I an angry, street-smart tough girl, or a sweet, naïve do-gooder? Ummm, unsure, let me check with Chris. Sometimes I’d even go further physically with guys than I’d planned to because I was worried that if I didn’t, they might leave me. I probably don’t need to explain that this is an incorrect way to go about both dating AND figuring out one’s own personality, but that particular insight was completely lost on me at the time.

This behavior probably could have gone on forever—and I imagine it does some people—but it was around college that I made my first incredibly close female friend, and she showed me a different kind of identification and support. She snuck past my “I only have time for boys” defenses with her intelligence, wit, and worldliness and by forcing me to go out to lunch with her and then somehow keeping me intrigued without talking about boys at all. We watched movies on the mattress that served as her couch. We went to the grocery store, found weird recipes on the backs of soup cans, and then made them together, giggling hysterically. We shopped for clothes together and went to pet puppies at the pet store. Mostly, we talked about everything we believed, and she didn’t judge me or act as if her attention was dependent on how cool I was.

I started noticing that those good, anchoring feelings of self-esteem I’d gotten with boyfriends also seemed to be happening with her. At the end of a day spent with her, I’d see myself as worthy and cool through her eyes. All this made me wonder: Were there perhaps other paths to self-esteem that didn’t involve dating guys who may or may not have deserved me? If I felt good from hanging out with a friend, was there a chance I could feel good about myself…by myself? I decided to take the big leap into singlehood. The guy I was dating at that moment, in a hilarious sign of where we actually stood, didn’t seem to mind too much when I dumped him. And so I went, bravely and terrifyingly, into yet another period of trying to become a person—but this time, I was architecting myself alone. I broke the pact I’d made with myself to stay a silent and accommodating mirror, and, with my friends’ encouragement, started talking about me.

I deconstructed myself piece by piece, examining every inch of my personality the way I used to examine the boys who had served as my self-esteem salvation. Was this piece of my persona really me, or was it formed in the hope of making others like me? Did this other piece bring me joy? Did that one make me feel like a fulfilled, whole person, even if no one else liked it? Am I wearing this ponytail because I want to put my hair up?

It was about then—not at all coincidentally—that I started writing, and I took pride in the things I created, like, How cool am I that I made this? I began taking dance classes again, made new friends (both male and female), and discovered that those delicious being-seen feelings could come from almost anywhere—a comment on a blog post I’d written, an outfit I’d put together, a happy dog, a long walk, hearing my sister laugh. Instead of focusing only on making dudes feel good in hopes that I’d get some of the runoff, or on how much any one friend appreciated me, I was passionate about what made me feel good. I felt like a kid again, rushing around from one activity to the next, amazed at what the world had to offer—all the things I’d been ignoring to make sure other people still liked me. Slowly, slowly, I figured out who I was when I was alone, and then reintroduced that person to the rest of the world: a girl who exists—even if no one’s looking at her. ♦