I thought going to a fancy store betrayed my mom’s very existence. 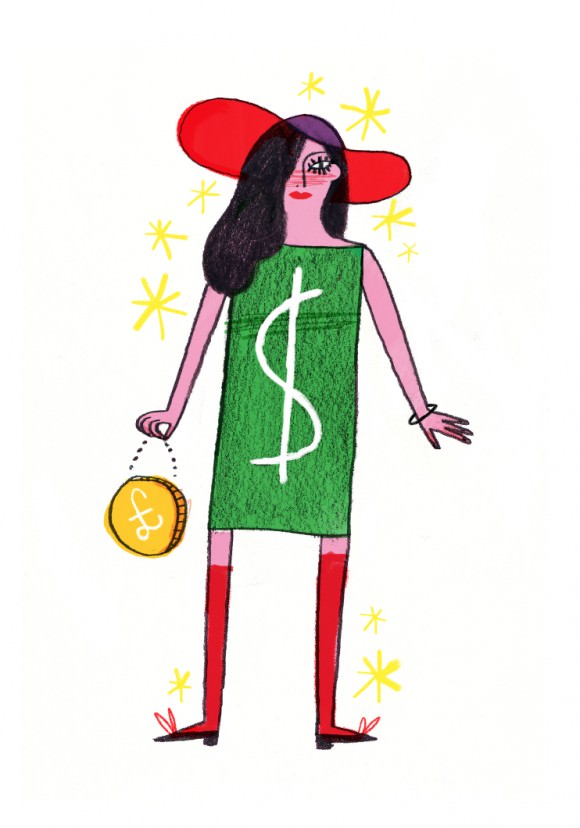 When I was growing up in Wyoming, my mom and I weren’t POOR, exactly: We had subscriptions to magazines like Elle, Vogue, and Architectural Digest, but their contents were nothing more than pretty fantasies—I couldn’t fathom that people actually lived the luxurious lifestyles portrayed in them, and I couldn’t imagine how much the things in the photographs might cost. That was before I learned to read the credits, where the prices are often listed, and way before I ever met anyone who could live like that.

Then I moved to New York (aka the holy land for $800 shoes and $1,200 gowns). One afternoon soon after my arrival, two new friends who worked in fashion invited me to hang out. We walked around Soho, dipping into and out of expensive clothing stores like A.P.C., Miu Miu, and Marc Jacobs. It had been one thing to admire, catalog, and dream of high fashion in the pages of a magazine, but it was quite another to be in proximity of the clothing, to touch its impossibly luxurious fabrics, to eye and finally register its even more impossibly exorbitant price tags. There weren’t any fancy department stores like Barney’s or Bergdorf Goodman in Wyoming—there, the wealthy people were ranchers who sprung for higher-end Western gear like elaborately embroidered shirts and fancy cowboy boots.

As my new friends and I approached the Marni shop, its door guarded by an imposing security guard, I became increasingly uncomfortable. It was Saturday afternoon, which meant that back in Wyoming, my mother was at work, printing out bets for gamblers playing the off-track horse races. This was her only workplace at the time, but when I was little, she always had at least two jobs at once. She worked hard to make sure we could live modestly, but comfortably. I felt an overwhelming sense of guilt standing in front of the Marni store—even though it had been one of my favorite fantasy labels—as I thought about the hardships my mom had endured so I could have a nice life. My moneyed friends were used to strolling around checking out $800 dresses. How could they ever understand my upbringing—how could they possibly understand me?

That’s what I was thinking outside that store that day as I felt my chest tighten in what I’d learned to identify as the beginning of a panic attack. “I can’t go in,” I told my friends. “Okayyy,” they said, looking momentarily confused. They went in without me; I lingered on the sidewalk, looking at the security guard, who stared at me through the store’s glass front wall. And in that moment my situation was made clear to me: I felt like I related to the security guard more than I did to my friends. I assumed his background was closer to mine than theirs were. (Who knows if I was right, but I was going through a thing.) I felt acutely something that would continue to haunt me for the rest of my life: that I didn’t “belong” in places like Marni or Miu Miu or Marc Jacobs. I wasn’t supposed to have “nice things.”

When I was in seventh or eighth grade, a brand-new teenager with a burgeoning interest in tennis, I dragged my mom to the Foot Locker at our local mall and begged her to buy me a T-shirt screen-printed with a picture of my favorite player, Andre Agassi, and the punny line ACE OF HEARTS. It cost $20—not astronomical for a middle-class family in the 1990s—and I needed it. “It will inspire me on the court!” I pleaded. But my mom wouldn’t budge. “You already own too many white T-shirts,” she said.

What kind of ridiculous argument was that? Sure, I owned a couple of white T-shirts, but neither of them were blessed with the glorious face of Andre Agassi! My mom stuck to her argument, which made zero sense to me, and we ended up in a terrible fight. I cried the whole way home.

A few days later, it dawned on me that our argument wasn’t actually about the number of white T-shirts in my dresser. My mother was trying to avoid the humiliation and guilt of admitting that she didn’t have the money to buy me that Agassi T-shirt. (I have since asked her if this is true, and she confirmed it.) This realization led, dominos-like, to others: She didn’t take that second job at the off-track betting place, nor the third one selling costume jewelry “just for fun” or “to socialize,” like she told me. She needed to work three jobs to cover our the bills and put food on our table. She was shielding me from how much she was sacrificing to give me a better life than the one she had, because she didn’t want guilt or anything else to keep me from being successful.

Her plan worked, because at the age of 26, I got to move to New York and follow my dream of being a professional writer. I write mainly about music now, but in the beginning, I wrote about whatever, including fashion. As a fashion writer, I worked for some of the same magazines that I mooned over as a kid, and I hung out with people who shopped at the stores that advertised in them. That was the first time I realized that such people were real, which was the same moment I realized how different I was from them, and in what specific ways.

Wyoming was so sparsely populated that, in my tiny high school, the poorer kids generally intermingled with the richer ones (even though the most popular cliques consisted of kids whose parents could afford to buy them fancy cars and brand-name clothes). But in New York, wealthy neighborhoods are separated by distinct geographical boundaries, and the richest New Yorkers send their children to fancy private schools, where they never have to interact with those in lower class strata (barring, say, their nannies and housekeepers). You can live your whole life here and never befriend anyone on the opposite end of the financial spectrum.

I wondered what my mother would think of this new world I lived in. I imagine it would be unrecognizable to her. A few days after my window-shopping identity crisis, I called her and told her what had happened. I told her that it felt like just walking into that store would have been an affront to the modest life she worked so hard for us to have. It’s supposed to be the American dream for children of immigrants to do better than their parents, materially speaking, but no one talks about the guilt attached to that notion. That they worked so hard so that we could casually run our hands over racks of $1,000 blouses—that their sacrifice bought our entitlement—is something I’m not sure I’ll ever be able to reconcile in my head.

“I’ve always been so proud of you,” my mother told me on the phone. “I worked very hard, but everything I did, I did for you. And everything you get now, you deserve, because you work hard and are so talented.” I know that she means that. It’s something she’s said to me many times over the years. I’m trying to believe it too. Sometimes I can.

Like just now, as I was writing this very essay, and I FOUND THE BYGONE AGASSI SHIRT that I pined for so deeply as an adolescent on Etsy! I quickly bought it for $35, not much more than it cost in the ’90s. I was completely beside myself that after 20 years, the shirt still existed somewhere—and that now, thanks to my mom’s hard work in supporting me, I was in a place in my life where I could afford it. When it came in the mail, it was full of moth holes, but extremely soft, like any T-shirt that’s been well-loved, and I felt more excited and rich than my friends with all the Marni in their closets. While I’m sure the shirt would have made me happy if I had owned it as a teenager, there’s no way I would have cherished it as I do now. It’s more than a T-shirt to me now: It’s a magic totem with the power to dispel my fears of ingratitude and to remind me that my professional or financial success doesn’t negate anything my mother did or does for me—it’s a tribute to all of her hard work. I’m not leaving her behind, I’m bringing us both us.

When I called her to tell her about the T-shirt, she didn’t remember it as well as I did, but she laughed when I repeated her “too many white T-shirts” line. She finally admitted that her reasoning there was absurd and hilarious, as far as excuses go.

Nowadays, I still can’t afford really buy fancy clothing unless it’s second-hand or on sale, but I also know that it’s OK to enjoy those things without feeling like I’m renouncing my mother’s determination, the sacrifices she made on my behalf, or the experiences that fundamentally made me me. And neither does she! When my mom visits me in New York, she, too, likes to window-shop in fancy stores! And, every holiday, I send her the prettiest, most bejeweled clothing I can afford. She deserves it. ♦