An epistolary meditation on Lorde, Flannery O’Connor, the grotesque, and the ache of being a teenager. 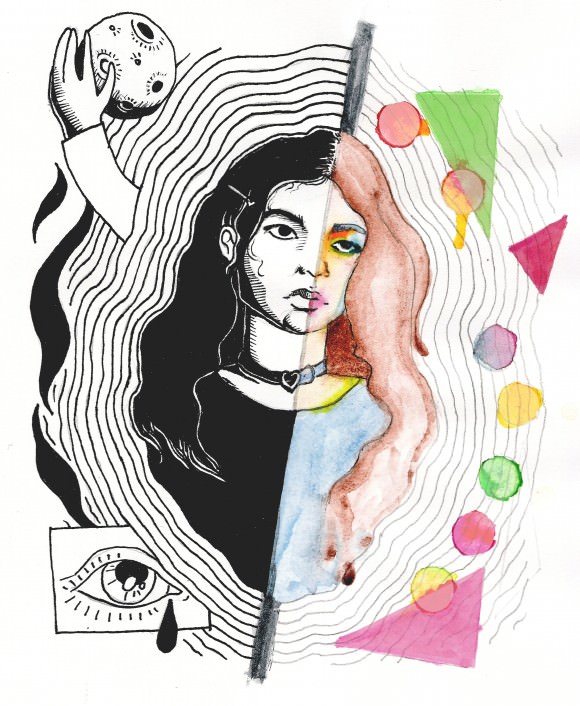 It’s been almost a year since we first met in the corner of that theater in New York. We had both bought the day-of student tickets and I had a crush on you the moment you sat down next to me. After the play we wandered around the city and pretended we were only excited about the play, and not each other. It had just rained. We sat in Central Park. You asked to see me again, but I was flying home to Chicago the next morning. When I got home, I called you. You answered. We talked. Then, I began writing you emails. I wrote this one back in December, right after your 20th birthday, when you had already forgotten about me.

I found it again recently, just as I’m at the cusp of so many things. In a few weeks I’ll turn 20, too. Soon I’ll be transferring schools, leaving the city I grew up in, my friends, and everything I know. I’m scared to be at the edge again, and finding this old letter reminded me that there are all kinds of edges to be at.

Now I write to a different boy. His name is Paul. I might have forgotten about you, if not for the emails still saved on my hard drive.

We still haven’t addressed the fact that I send you emails at strange hours—2, 3 AM—without really knowing you. But you still haven’t responded to any of them, so I don’t bother asking you about it. I just keep sending them. My friends say you probably think I’m crazy. Last night I read I Love Dick again, just to feel better about myself, these messages, and your silence. I came across this line: “But loving you’d become a full-time job and I wasn’t ready to be unemployed.”

I underlined it because it was just your 20th birthday, and for the entire day I was struck with the significance of that. The day felt important, like the birthday of someone I’ve known intimately. It made me wonder about my own age. About still having “teen” slapped onto the end of my number.

There was another passage from I Love Dick that I underlined:

I’ve never really strongly identified as a “teen” nor thought about belonging to that particular species until this year, just as I’m almost done being one. I bought Lorde’s CD when it came out a few months ago, and I’ve been listening to it on repeat since. On the way to school, on the way to work, on the way home, while driving in the rain, on my way to a Halloween party with all my friends singing along in the backseat. Lorde and her CD accentuated this teenage identity I’ve let myself adopt lately, before I let it go forever.

For a while I didn’t bother trying to understand why I like her so much, why it aches to listen to her music, why it haunts me until I turn it on and chase the ghosts away. But lately I’ve been reading a lot of Flannery O’Connor, the Southern writer whose short stories are filled with complicated characters and gruesome endings, and I began to understand a bit more.

In Flannery O’Connor’s writing, I saw everything I was familiar with but didn’t have words for. I quickly became obsessed with how she approaches religion in her stories. I knew she was describing the Deep South, where a stranger might randomly call you a Yankee, but she could have been describing the Hasidic community I grew up in and left. Her characters are self-righteous, complicated, naïve, and so terribly well-meaning. She describes a world filled with well-worn traditions that seemed odd to everybody except the people raised with them. She wrote in my language, the language of the grotesque.

When people hear grotesque they think of gross, weird, disfigured, ugly, and comically distorted. But grotesque can also mean fascinating, fantastical, strange, magical, unusual, eccentric, just plain odd. It’s also a way to describe the aspects of life that repulse us, humor us, and make us uneasy all at once. The grotesque takes on forms we are familiar with but distorts them until they start to contradict themselves. O’Connor’s short stories speak of things we are familiar with—death, religion, farms—but present them in a way that twists our assumptions and plays with our expectations.

I think this idea of the grotesque accurately describes the world of a teenager, which simultaneously involves itself with the outside world and keeps its distance from it. When you’re living so intensely in your head there isn’t any difference between what you imagine and what actually takes place. This could also be said about the places we can’t escape from that also feel like home. I feel this way about my old community. The community that raised me is a large part of my identity and defines me in so many ways. At the same time, I remain completely contradictory to my community. I don’t look like them anymore, think like they do, or keep the traditions.

Most days, the world feels overlarge as it teems around me, and I struggle to keep steady and feel relevant within it. I stumble, and feel entirely unbalanced and worthless. On those days I feel powerless, and I am driven by a need to make the world feel bearable and navigable. When we’re young children, most of us have people we can trust to tighten our world up so it’s nice and small and cozy. But then we get older, and by the time we’re teenagers we’ve realized that religious doesn’t always mean “good,” and that our parents are right about many things, but not everything. Because more things are suddenly possible, the world, as we see it, gets bigger. I remember the first time I saw my parents cry, and how it eventually stopped surprising me to see them cry, to realize they don’t know all the answers. And the world got wider. I remember when I went to the psychiatric unit for the first time and realized I wasn’t the only one who constantly felt like dying, and that I couldn’t always trust authority figures to be looking out for my best interests. It was important that my world grow, but with each of its growth spurts came a feeling of powerlessness, and a consequent urge to grab on to things and draw them near and tighten my world again. When I’ve drawn my world in to a comfortable size, I feel omnipotent again.

All of this is possibly the reason why teenage romances feel so intense and monumental, because they become the home bases in an otherwise insecure world. I dated my first boyfriend when I was 17, and when we broke up I felt like I was let loose into a big, open world. I was glad to be alone in my own head, but there was something frightening about losing that security. For a long time, his positive opinion of me kept me anchored in a world that shifted unexpectedly. He loved me intensely, completely, and overwhelmingly. It felt special and singular, and it provided me with a cozy and safe world within the bigger world I had learned to mistrust and be skeptical about.

The funny thing about Flannery O’Connor is that she seems at once omnipotent and powerless. In her writing, the narrator critiques each of her characters and almost mercilessly destroys most of them at the end. But throughout the stories there is a feeling that the narrator is no better than the characters she condemns. In writing these letters to you I feel powerful. Here, between these lines, I can create a world where you care about what I have to say. Here, I have created a space for myself within the huge world where I feel as though I have no say. Maybe this is why I keep falling in love with boys who won’t answer my letters, because it’s a chance to create a world that’s small, one that I can steer.

The best way to approach these worlds—the small teenage world we create to make life bearable, the Hasidic bubble of Orthodox Jews in West Rogers Park, the farm in the Deep South—is through the language, the art, and the music that engage with them while contradicting them. Through identifying the contradictions and being fascinated and delighted and sickened by them all at once. Through facing them, confronting them, and fusing them, which Flannery O’Connor does in her writing, and Lorde does in her music.