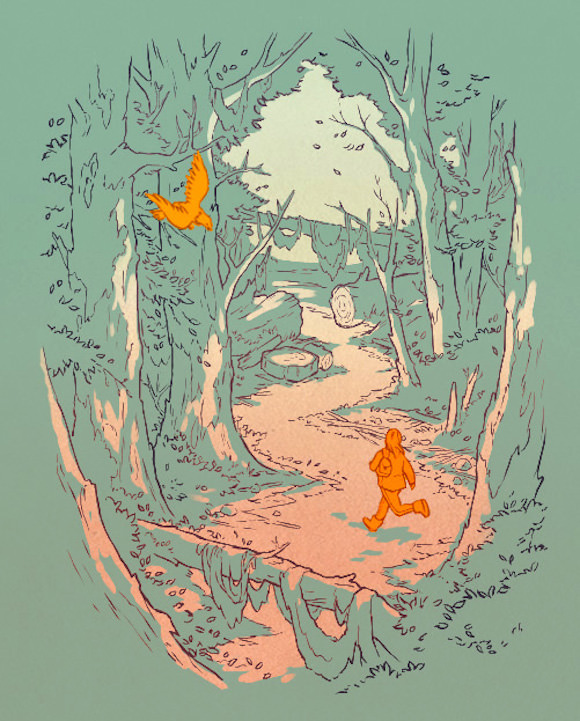 The hiking thing started by accident. I had one really close friend in Seattle when I moved here back in July, a girl I’ve known since high school. We were stoked to see each other as soon as I arrived, so she invited me and my husband, Scott, to go on a hike with her family the day after we moved into our new apartment. I was a little bit wary. I remember texting her, “Only have crappy sneakers, that OK?” She replied that she just wore Converse and the hike was easy enough that her two young children were coming along.

Now, I am not a nature girl by any stretch of the imagination. As a kid, I had to be dragged on my family’s yearly camping trips, the entirety of which I spent complaining. I don’t like being cold or getting wet. I have trouble sleeping in any bed besides my own, let alone a sleeping bag on the floor of some tent. I’m afraid of spiders. And let’s not even talk about the bathroom situation. I have a tiny bladder, and stumbling out into the woods in the middle of the night to find a grody outhouse is basically my worst nightmare.

When I decided to move to Seattle, nature was a big selling point—even from my house, you can see the Cascade Mountains and Mount Rainier, and there are trees everywhere, including the big Douglas firs that Agent Cooper is so fascinated by on Twin Peaks. But to me that stuff was like a pretty picture frame around a city that had everything I really like: tons of great vegan food; cool music, theater, and art; and (especially) a vibrant literary scene.

I also moved to Seattle to escape. I had lived in or near Chicago for most of my life, where I’d spent about a decade trying to make a life as a writer. I’d had lots of ups and downs along the way, but those fluctuations had, in my last four years there, begun to plateau at a level I was unsatisfied with. I had published two novels but was unable to generate any interest from publishers in the next two, and I was earning my living from bartending instead of writing. Not the worst situation in the world—at least I had a job—but far from my dream of being a recognizable name as an author.

I knew moving to a new city wouldn’t magically make all of that go away, but emotionally, I needed to shake things up. I felt restless, unsatisfied, and insignificant, and it was turning me into a walking pity party. There was a lot about my career that I couldn’t control—like publishers wanting to buy my books—but I couldn’t let those things control my happiness. So I chose to move to a new state and try new things: Maybe I could get a job at a nonprofit or a university—something that would occupy my mind so I wouldn’t obsess about writing all the time. And after five years of writing during the day and bartending at night, I looked forward to working normal hours so I could spend my evenings and weekends hanging out with Scott and the new friends I hoped to make in Seattle.

So when my friend invited us on a hike, I thought, Hey, that’s a new thing! Why not? The next morning, I put on my crappy sneakers and followed her and her two young children into the mountains outside Seattle for an easy one-mile walk. A born-and-raised city girl, I took deep lungfuls of the fresh, sweet-smelling air—it felt as good as downing a bottle of ice cold water on a hot day. Though we’d parked by the highway, we couldn’t hear it or see it, thanks to the ginormous trees that formed a magical soundproof barrier between us and the traffic. There was so much to see: mossy rocks, purple flowers peeking out from behind tall trees. The best part was discovering where the trail led: a little pond covered with lily pads. My friend had to stop her kids from running through the trees to jump into it, and I totally empathized with their impulse. The whole experience was pretty magical.

Sunday hikes quickly became a tradition for Scott and me. It was a relatively cheap way to spend time together—and since I didn’t have a job for my first two months here, cheap was important. We were also trying to make friends in our new city. Talking to new people has always been hard for me; I found, however, that people in Seattle love to talk about hiking! The subject made for easy conversation with the other people in our building and folks I met at parties. Plus, there was just something about picking fresh berries in Discovery Park, climbing to the top of Rattlesnake Ledge to gaze out at the Snoqualmie River Valley, or taking in a magnificent waterfall view at Wallace Falls that was deeply satisfying in a way that striving to get published never was.

One Sunday seven months after our first hike, Scott and I decided to head west to Olympic National Park. It was just a four-hour drive from Seattle, but when we got there, it felt like we’d been transported to a completely different world: It was scarcely populated, and the traffic noise, sirens, jackhammers, and shouting that I’m used to hearing in the city had been replaced by the sounds of wind and rain, the rushing of the river, and the occasional bird call. But my favorite thing there were the trees. Within the park’s boundaries is the Hoh Rain Forest, which contains tons of old-growth trees, many of which have been there for literally hundreds of years. Awe-inspiringly huge and covered with moss, they looked otherworldly, noble, and just wise, somehow. Like they’d seen everything.

We stopped to study an almost comically massive tree labeled “giant spruce,” and suddenly, a bald eagle flew by just above our heads. I had never seen a bald eagle IRL, but I knew they were pretty common in Seattle (I guess they’re attracted by the old trees and the salmon—thanks, Wikipedia!). It flew by too fast for me to take a picture, which bummed me out for a second because I wanted proof that it had really happened. But then I realized that I’d been there, I’d seen something that most people don’t see often if at all, and that was what mattered. My photographs couldn’t show how that moment made me feel any better than they could do justice to the giant spruce, whose sheer massiveness none of my pictures could capture. 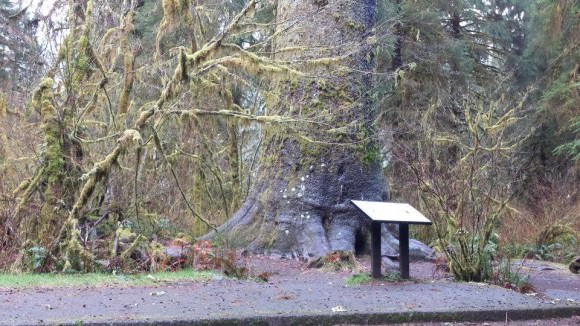 Giant spruce in this photo is much larger than it appears.

We ended up hiking seven miles that day, our longest hike to date, but I was too wrapped up in observing everything and thinking about that eagle and all those centuries-old trees to notice. Those trees were alive long before I was, and they will still be here after I’m dead. That bald eagle doesn’t even know I exist, and here I am still writing about it. I was suddenly struck with an overwhelming sense of my own insignificance.

I had felt insignificant before, of course: in Chicago, where I felt unnoticed in a sea of other writers; and in grade school and high school, where I had some amazing friends, but often felt like the least important person in the group, like I was there only because one person liked me, and no one else would miss me if I vanished. I felt professionally and socially insignificant, and that made me sad, bitter, and frustrated. But this feeling in the forest was different: I felt insignificant in a good way. Because, sure, those trees don’t care about me, but you know who else they don’t care about? Beyoncé. President Obama. Mark Zuckerberg. Oprah. The Dalai Lama. The Pope. A bald eagle has never heard of any of those people and doesn’t give a shit about a single one. A giant spruce can live for 700 years; our short, tiny lives mean nothing to it. It may sound strange, but no thought I’ve ever had has been as liberating as this one.

I’ve spent an inordinate amount of time in my life worrying about how I’ll be remembered in the end (of high school, of college, of a certain period of life, or my whole life) instead of focusing on what I’ll remember. A therapist I was seeing for a while asked me constantly if I was “living in the present,” because I wasn’t. I was always worrying about either the past or what the future held. That day, staring at that ancient tree, I wondered why I was making my problems so huge, when, compared with the life of this tree, my entire existence (let alone my writing career!), is just a blip, an insignificant nothing?

I don’t mean that in a nihilistic way, like, “we are all insignificant so we shouldn’t bother doing anything.” I kind of mean the opposite: If your life is just a teeny tiny blip on the radar, the only meaning it has is what you give it, and the only person it needs to mean anything to is you. For me, that means not stressing out too much about any one project or about being “known” in any way, and focusing instead on enjoying my time on the planet as fully as possible each and every day.

So, if you are feeling insignificant in a bad way, or just plain burned out from stressing about the relative success or importance of what you’re up to, I encourage you to find ways to revel in what a huge thing we’re part of. Though I love going into nature to do this, you don’t necessarily have to. I’ve conjured these feelings by looking out a window on a plane or a long drive or even on the train ride from the Bronx to Manhattan or Manhattan to Coney Island. I’ve also felt them in history museums and on my couch while watching the new Cosmos hosted by Neil deGrasse Tyson.

In the very first episode, Neil explains how, if the history of the universe were compressed into a calendar year, humans would appear in only the last hour of the last day. All of our recorded history would take place in the last 14 seconds of December 31. I mean, whoa. If that’s true—and Neil deGrasse Tyson said it was, so it is—it’s beyond silly for me to stress out and compare my own work, career, or life with anyone else’s. It would do me, and all of us, good to learn to step back and experience everything that’s out there, and relish this tiny blip of time we have existing as part of this huge, wonderful world. I’m doing that more and more these days, and I’m happier than I ever knew was even possible. ♦