Deciding to change my “outer” gender to match my inner one was one of the scariest things I’ve ever done. And then I did it all over again. 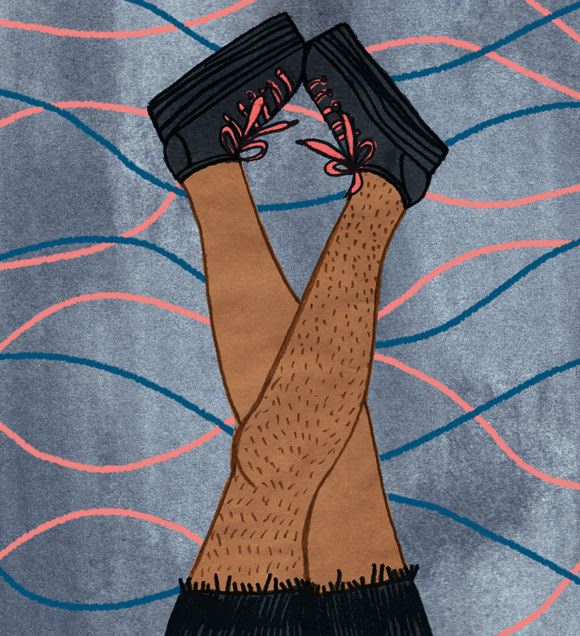 Two nights ago, I went to my friend’s weekly one-woman karaoke night at a local gay bar. I had just accompanied her to Nicki Minaj’s “Fly,” and I got offstage feeling really good about my performance. As I was walking back to my table, a man approached me and said, “You’re amazing!” He looked like he was in his 20s and a few drinks deep, and although he wasn’t my type, that kind of attention is always flattering. I was probably blushing. Then, still smiling, he asked me, “What’s your gender?”

Taken a bit aback by his sudden forwardness, I struggled for a few moments to formulate an appropriate response. What I came up with: “Ummm…hmm. Uhhhhh…”

“Yeah, that’s cool!” the guy said, upbeat as ever. “I just wanted to know what gender you identify as.”

About 15 seconds passed before I managed to say, “Umm…uhhhh…androgynous, I guess?”

After this incredibly satisfying exchange, we went back to our respective tables and never spoke again. I need to get better at answering that question, I thought. But, see, it’s complicated.

If that man had asked me the same question last year, I wouldn’t have skipped a beat before proclaiming, “I’m a guy.” I thought I had it all figured out. I had made a conscious choice to be a man, despite having been assigned female at birth. I was so sure, in fact, that I was a guy that I underwent a lengthy transitioning process, involving hormone shots and close monitoring by a therapist, to get my outside appearance in line with my inner self—who was a man, no question.

But the big problem with our insides is that they’re always changing. As I approached my two-year mark on testosterone, I began feeling less sure of the choice I was making. I started to feel stifled by my chosen gender identity, buried under the trappings of manhood. My outside had ceased matching my insides, and that didn’t feel good at all. What had been a source of freedom—getting to choose what gender to present myself as—started to feel like a trap.

It’s terrifying to decide to stop taking testosterone after two years of regular injections. Even scarier, for me at least, was the prospect of facing ridicule from my friends and from strangers on the internet when they learned that I was going back on this thing that I had been so passionately sure of just a few years ago. I was afraid that people would latch on to this idea that my transition was a “mistake” and use it to discount the validity of other people’s transitions. I feared the street harassment that comes with looking at all “feminine.” I feared that I would never look more feminine, that I would always be perceived as “a man” forever. But most of all, I feared the unknown: Where was I headed? What exactly did I want to look like, or “be”? What if I was making a huge mistake?

However, I knew that a way bigger mistake would have been to try to stifle the inner voice that was telling me I wasn’t happy and that I needed things to change—again. After I took my final testosterone shot in June 2013, I felt a mixture of excitement, embarrassment, and confusion. How much would my appearance change, and how rapidly? What would people think when they saw me on the street? I was truly alone on this journey—no one I knew had experienced anything like it—so I took one baby step at a time in whatever direction felt right for me.

The first one was shaving my legs, something I hadn’t done in four years. Or, rather, shaving one of my legs, which seemed to express how I was feeling at that point: I’m in between, and I don’t care what you think about how I look. The next step was buying an outfit that made me feel good: a comic-book-print bandeau under a white tank top, black cutoff shorts, and black platform sneakers with hot pink satin laces. I was nervous about wearing the outfit in public, but my desire to look cute trumped my nerves. Wearing things that made me feel attractive gave me a little confidence boost, which was all I needed to focus less on what others thought of me and more on my own happiness.

One thing that made me happy was spending time with a great friend that I grew up with. She has always loved and supported me, and she was a great sounding board for whatever I was going through at a given moment. She’d check in with me almost daily, asking, “How are you doing? What effects are you feeling from the hormone shift? What pronouns are you feeling right now?” She felt like a safe person with whom to experiment with presentation and pronouns. And there were a lot of experiments: One day I’d want to be referred to as she; the next, I preferred they—as in, “I just saw Tyler; they came over and we watched a movie”—which is where I am right now, I think. Sometimes I wanted to wear a strapless dress with face stubble, sometimes a hoodie and red lipstick. Even though everything about me was in flux, I knew my support system was stable. I am so lucky to have this friend in my life; she allowed me to actually enjoy this process of discovering who I was and what I wanted.

I’ve been off hormones for 10 months now, and I still don’t know how to articulate my gender identity in a word or two. That might seem super uncomfortable, and it does make for some awkward moments in bars, but mostly it is actually a pretty freeing feeling. The way I think of myself changes from moment to moment, and instead of fighting it, I just go with it. I’m learning to exist without analyzing every aspect of myself or trying to force myself to feel, live, or look any certain way. I love looking in the mirror and watching my features contradict one another.

Sometimes I feel like my gender is an optical illusion: Light me from one angle, and you’ll see a pretty girl; from another, I look like a pretty boy. I am neither, and I am both. Many people will never understand how I feel, but what matters to me is that I understand myself, even if I can’t find myself in words. The possibilities seem endless. ♦