Literally the Best Thing Ever: The OC

It was our seventh grade bible on how to be 17.

Why Can't I Be You: Alison Bechdel

Last summer I had all my wisdom teeth pulled out, and in the aftermath I washed down painkillers with a liquid diet and slept strange, fitful hours. Thankfully, the week before this, my mom had been sorting some boxes of old stuff and found the first-season DVD set of The OC. Did I want to keep it? 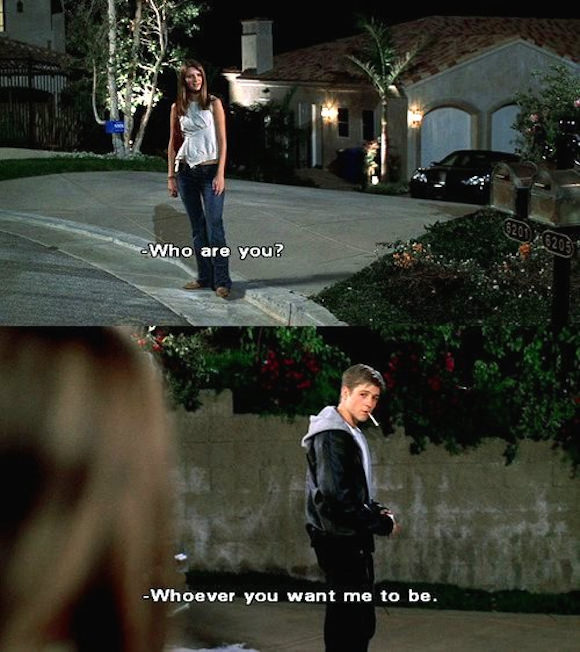 Bad boy Ryan Atwood meets girl-next-door Marissa Cooper in a scene surely inspired by when James Dean and Natalie Wood meet in Rebel Without a Cause.

I spent my post-op week on the couch, eating chocolate pudding and watching all 27 episodes on those DVDs, which weren’t mine to give away anyways. They belonged to my seventh grade BFF, Kiera (not her actual name). She was the leader of our girl gang, one of those friends who hold a strange social power: When you’re together, it’s magic. Like, even if you’re just sitting on the couch eating Ho Hos together, you’re having the time of your life. When the show was on the air, between 2003 and 2007, we used to call each other before each episode and stay on the line for the whole hour, gasping into the phone each time Marissa and Ryan broke up or made up, and gossiping through the commercial breaks.

If you haven’t seen The OC, you’ve probably seen a show it inspired: Laguna Beach, Gossip Girl, and Pretty Little Liars all have the scandalous legacy of The OC to thank for bringing some major teen drama to the small screen.

Basically, this kid Ryan is abandoned by his mother after he’s caught helping his brother steal a car; he is subsequently taken in by a wealthy family in Orange County, where he lives the charmed life alongside their adorkable son, Seth Cohen. Ryan falls for the Cohens’ seriously troubled next-door neighbor, Marissa, while Seth pines for her best friend, Summer, whom he’s loved since forever. The foursome have a pretty crazy school year that first season, what with Marissa’s substance abuse issues, an almost-shooting, and lots of fancy parties. 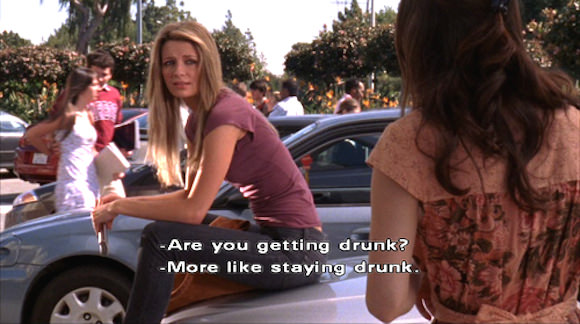 The OC was our seventh grade bible on how to be 17. “I want to BE Marissa Cooper,” Kiera would sigh into my ear every Tuesday. We all did. She was the epitome of cool to us, and we loved every scandalous thing she did on the show: day drinking, shoplifting, throwing tantrums while toting Chanel bags. Marissa Cooper played beautiful-but-damaged so well that we somehow managed to look past all the truly awful things that happened to her character and focused instead on the thrill of spiking drinks at a charity ball or hiding out in a half-built house with the boy you liked.

We wanted thrills, too. Every Friday our little group of friends called Kiera to find out the plan for the evening, and she would arrange for five or six of us to meet up at Starbucks or Peace of Pizza at the mall or in town. After that, we mostly just wandered around, stood or sat on various street corners, got Frappuccinos, and giggled at groups of boys sitting on opposite street corners. We dared one another to ask for their numbers. Once one of us made out with one of them behind Trader Joe’s. This development was good for at least two weeks of breathless discussion over the phone between Kiera and me.

Though we weren’t in any classes together, she and I were in constant contact. When we weren’t on the phone, we were on AOL Instant Messenger. For some reason, it felt really important to be friends with her. When we were talking or hanging out, I felt like we were inseparable, but as soon as I was alone again, I was struck with fear: fear that she would forget to call me, or decide tomorrow that another one of our friends was a better choice for a BFF. I told her everything about me, but she always held part of herself back. While I could go on for hours to her about every new crush, she never told me about hers. I worried about what that meant: Did she not trust me? Or (worse) did she not need to share every detail of her life with me, her best friend? Was she sharing that stuff with someone she liked more? 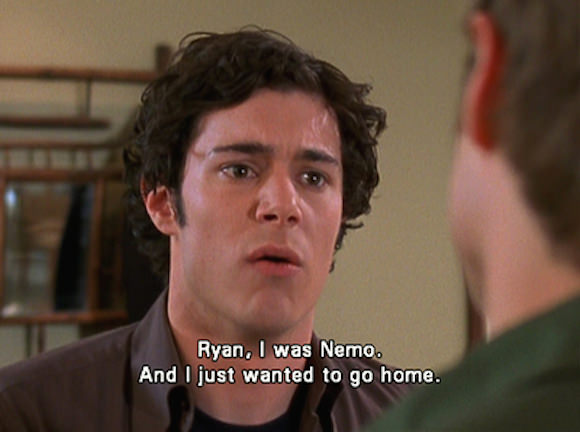 Seth Cohen, after his first time. Or me, after my first high school party. (Via Yellow Means Go Faster.)

By the end of middle school, our girl gang was rolling into boys’-prep-school dances in sequined tops and tight jeans. The stuff I saw go down on those waxed gym floors was definitely R-rated. We were trying to become the teenagers we were meant to be: cool, sexy, reckless. We wanted to be more than just viewers.

And I wanted it, too, to be all those things. I wanted to be cool (no chance) and sexy (Kiera teased me for being “a prude”) and carefree (see EVERYTHING above for the likelihood of this). None of this threatened our friendship, though—until we got to high school. There, everyone was a little older, and at parties there was more than just seventh-grade-dance orange soda to gulp down for courage.

Once, the summer before ninth grade, our group got a ride from some older guys to a party near the city, at a house somebody’s parents had left for the weekend. When we walked in, there were a bunch of dudes sitting on a dirty mattress drinking forties. I tried to sit so you couldn’t see up my skirt and prayed that we’d find a ride home later. I couldn’t think of much that was scarier than the idea of having to spend the night there, with those guys. I was also terrified that my mom would call and ask me to come back early. I was terrified that the cops would come. And I was super terrified of disappointing Kiera, whose main goal at that time was to be popular with the older crowd and who was therefore always on the lookout for the next party, the coolest party. I was the opposite of Marissa Cooper, which meant I was the opposite of cool.

Kiera and I had become close on the sidelines, stealing her sister’s Cosmos and watching reruns of Sex and the City. But when we got to the age where we felt like it was our turn to live out all that stuff, it became clear how different we’d become in the interim. I’d started listening to Death Cab for Cutie (ironically enough, Seth’s favorite band on The OC) and wearing plain T-shirts and (less tight) jeans. I read thick books—for pleasure. I decided I was “too serious” for pink. And then, inevitably, the thing that I feared the most finally happened: Kiera stopped calling. I was devastated, or at least I thought I was until I realized that I’d stopped calling too. We grew mutually apart, and by the time The OC got cancelled we never hung out and rarely spoke. I knew it was officially over when she had a mutual friend ask for her DVDs back.

Why couldn’t she just ask me? I wondering, getting progressively angrier as I let my thoughts gain momentum. Didn’t she remember all those nights we’d spent dreaming up the perfect flirty tank-top/skirt/flip-flop combination? All those times we’d gossiped well past the end credits, prompting my mom to ask what I could possibly still be talking about? I felt bad about the end of our friendship for a long time. I put on a brave face, but there was a stubborn part of me that still wanted to know that I was important to her. At first I forgot to give her box set back, but then I kept it stubbornly, spitefully, as if her tugging at this one thread had unraveled our friendship.

When I revisited The OC last summer, my face covered with ice packs and my jaw throbbing where my wisdom teeth had once been, I watched it with my mom. While Marissa was throwing down at the beach house, I was throwing up from pain meds, and my mom was spoon-feeding me yogurt. I still really enjoyed the show, maybe even more now the “teen lifestyle” it portrayed was no longer something I aspired to—it was something I’d lived through. (Marissa Cooper, as she slinks and sulks her way across the screen, seems as glamorous to me as ever, though.)

When I was 13, my mom walked in on me watching the scene where Ryan and Marissa kiss at the school fair and told me the show was IN-appropriate; now she wants to order season two from Amazon so we can keep watching together. I know it seems so cliché to say, The show hasn´t changed—I have. But I think that’s the best way to describe what happened! Rewatching the episodes I was obsessed with 10 (!) years ago, I can really feel how much time has passed. Since the show’s cancellation, I’ve had two real, serious relationships (no more flirty standoffs on suburban street corners), landlines have become a thing of the past, and I´ve come full circle to love all things pink and girly (in the end it was my ideas about what was or wasn’t “serious” that were too precious). I’ve also had at least three other best friends post-Kiera and countless bad role models post–Marissa Cooper. Now, finally, that whole heady period of my life feels like ancient history, so remote I can hardly believe the details: We had Xanga blogs? I wore flared jeans? We drank half a beer behind the pizza place?

We flat-ironed our already-straight hair. We went to the beach. We imagined 17. ♦

literally the best thing ever the oc