I assumed that I was selected for the Teen Tournament because I’m black. 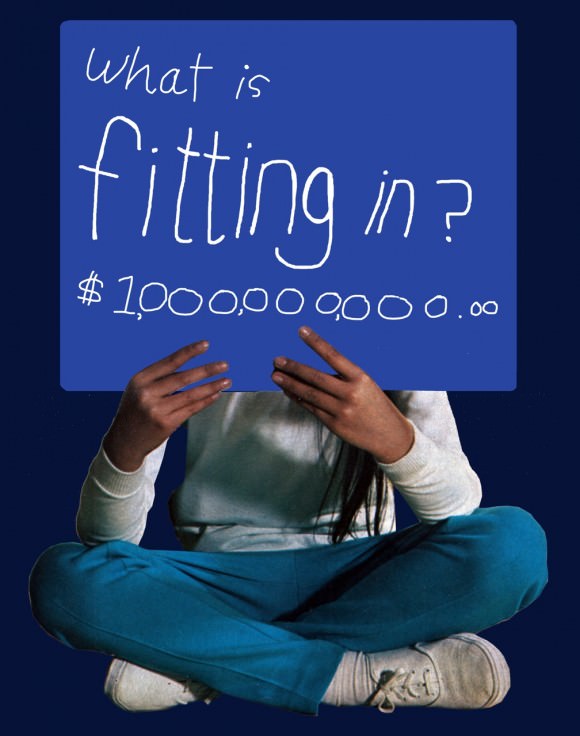 When I was a high school senior applying to colleges, I knew that a thick envelope in the mail usually meant good news. One such delivery that year was no exception, but it wasn’t from a university: I opened the packet and was dumbfounded by the news that I had been selected as a contestant for Jeopardy!’s annual Teen Tournament. I calmly turned to my mom and told her what the letter said. She freaked out, employing an appropriate-seeming Tiger Woods fist pump, but I barely reacted. Instead, I did something I’ve done countless times in my life: I automatically assumed that I was chosen because I’m black.

Just a few weeks back, I had been really excited about the prospect of competing on the nightly trivia game show, one of my favorite things on TV. I got the chance when it was announced that 2001’s Teen Tournament was to be filmed in my hometown of Philadelphia. Its producers wanted to include local teens, so nearby schools sent their best and brightest pupils to an open call. My academically competitive public magnet school gave us all a written test, then we had an in-school tournament to determine who would be sent. I went up against my smartest classmates, and, to my surprise, I won. That felt good. But I still wasn’t getting my hopes up about getting onto the show.

At the open call, I was granted an audition in front of the show’s producers. Looking around the room, I felt different from the other kids who had made it this far. They were mostly white and suburban-looking, so I decided to use my half-Ecuadorian mixed-girl urbanness to my advantage by turning up my the Cosby-kid charm to the extreme. I remember the wide-eyed panel taking in my confidence as I told personal stories about my Philadelphia Eagles fandom, my thrift store shopping, and my nascent ambition to become a professional DJ. I had never done this before—play into what I thought people expected a nonwhite “smart girl” to act like—and I felt strange afterward, vain and false.

At the local geography bees I participated in as a kid, my opponents were mostly black. But when I advanced to the official state finals, as I did twice in middle school, I was surrounded by white kids and their parents, who looked at me as either undeserving or “exceptional” (not like other brown kids!). I lost those tournaments almost immediately, which made me feel like while I may have been considered smart in the fishbowl of my school, I couldn’t compete in the vast “real world.”

Leaving the Jeopardy! audition, I felt the same way—like my “exceptional” skills at school wouldn’t translate onto this national stage. So when I got that packet in the mail, I didn’t feel like I’d earned it. I felt like I was an “affirmative action” pick, which made me not want to go on the show at all.

My being chosen soon became public knowledge, and everyone in my life began to look at me a little differently. I became a local micro-celebrity in the insular, working-class black neighborhood where I grew up. Before Jeopardy!, I had just been a shy, light-skinned geek who “talked white” and carried her lunch in a Sailor Moon lunchbox. But as the news spread, my neighbors embraced me for the first time. People started to wave and smile in my direction as I passed. I saw parents tell their children to stay in school, because if they did, they could be like me. On my walk home from school, scrawny elementary school kids came up to me and politely asked how I got to be so smart. It was heartbreaking, terrifying, and adorable, but it felt like such a cop-out to numbly give advice like “Remember to study” or “Do your homework,” when what I really wanted to say was “Read when you feel lonely,” or “Don’t ever let anyone tell you what hobbies or interests to have.”

Every part of me wanted to reject the invitation to be on Jeopardy!—except one small but stubborn part that wanted nothing more than to honor my nana. My maternal great-grandmother had passed away from cancer a year earlier. Since my single mom and her mother both worked full-time when I was a kid, I spent holidays, sick days, and snow days with Nana, who lived by herself in an economically depressed area of North Philadelphia. Every evening, we watched Jeopardy! and Wheel of Fortune together. Nana rarely looked up from her crocheting during our shows, but I remember her pleasure whenever I shouted out answers. Nana would have loved to see me on Jeopardy!

At the actual tournament, I was the only brown kid out of 15, just as I’d expected. It wasn’t until the cameras were on us that I realized that I’d spent so much time stressing about why I was chosen that I hadn’t thought about the actual competition. I felt totally unprepared, and completely terrified: What if I lost? I would be disappointing my family, my friends, my neighbors, and all black people who had ever aspired to win a quiz show. And it would be possible for everyone in Philadelphia to recognize me the day after the show aired. The Cosby kid I had played at the audition had been replaced by a skittish, terrified weirdo. You can see the anxiety written all over my face in this video of the episode:

I stepped out onto the stage for the first time as the Jeopardy! theme song played. The nnouncer introduced me as a Philly native, and the crowd roared. I looked out at the hundreds of people gathered at the Pennsylvania Convention Center and was horrified to recognize some of my friends there, cheering me on. Unbeknownst to me, the show had apparently given several rows of tickets to students from my school. The pressure was extremo, and any remaining natural confidence I walked in with was shot. The first time I spoke on screen, I messed up the pronunciation of the category “Memorable Mnemonics.”

My two competitors were Caley, a self-assured boy from California, and Paige, a sprightly girl from Missouri. Caley dominated. He had total mastery of the clicker; he would buzz in after every question, regardless of the category, and even though he got some wrong, he was unrelenting. I, on the other hand, fumbled with the clicker and scavenged for answers where I could, usually after Caley or Paige had already given an incorrect answer. I struggled towards the end of the round, and by the time it was over, a nightmarish situation had developed: Caley and Paige had each earned upwards of $1,000, and I had a big, fat $0. In footage from the show, you can see the wooden smiles of my classmates clapping for me, even though the situation was far from pretty. My deepest fears had come true. This was proof that I didn’t belong, that I was a charity case. This proved that the black girl was dumb. 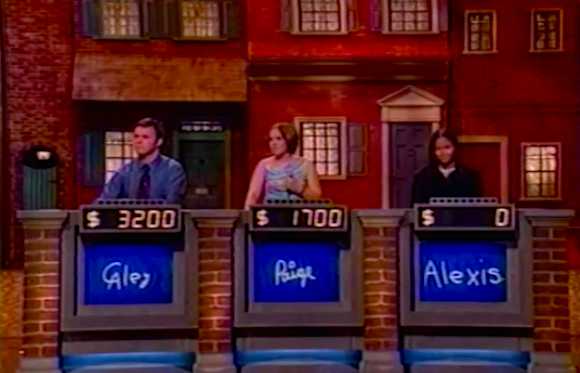 Then came Double Jeopardy, during which the game’s stakes increase exponentially. There was a whole category on the board devoted to Pennsylvania’s geography. I was aware that I had an unfair advantage as the hometown girl, but at that point, the only thing I cared about was proving to everyone that I deserved to be on the show. My turning point came when the host, Alex Trebek, read out the answer: “The origin of this city’s names are fishy; It may be from the Latin altus for ‘high’ or from a Native American word.” I confidently buzzed in and responded, “What is Altoona?” I’d remembered the town’s name from watching Family Matters, on which Steve Urkel had an Aunt Oona from Altoona (played by one of my life heroes, the disco diva Donna Summer). My obsessive TV-watching—including the time I spent watching Jeopardy! with Nana—ended up saving the day. Getting that answer right gave me a jolt of confidence, and suddenly all I wanted to do was win.

I flew through that category and the ones that followed. “What is Iceland?” “What is silkscreen?” “What is pepperoni?” I ended Double Jeopardy with $7,800, Caley with $7,200, and Paige with $5,600. As soon as Alex announced the scores, the crowd erupted with screams and claps, and I collapsed over my podium, nervously laughing in disbelief. For the very first time, I felt like I was worthy of my spot on the show. 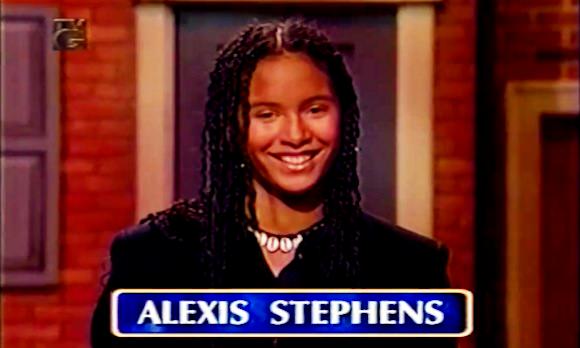 The category for the Final Jeopardy round was Historic Quotations, which is not my strength at all, so I made really small bets. I also had a little shout-out up my sleeve. My school is the second-oldest public high school in the country, and I was part of its 260th graduating class. To this day, my bet of $260 is the first thing my old classmates bring up when they mention the show. All my friends in the audience screamed like crazy when my bet was revealed. Even if I lost, I thought, that made it all worth it.

The clue was: “On July 13, 1859, he told Horace Greenley, ‘I have 15 wives; I know no one who has more.’” The answer was the famous Mormon leader Brigham Young, whom I had learned about in history class, but his name didn’t come to me that day. I had to write down something, so I scrawled the name of my #1 crush, the gorgeously pasty and geeky Blur guitarist Graham Coxon, In the video, you can hear my best friend, Kerstin, whoop when that guess is revealed. 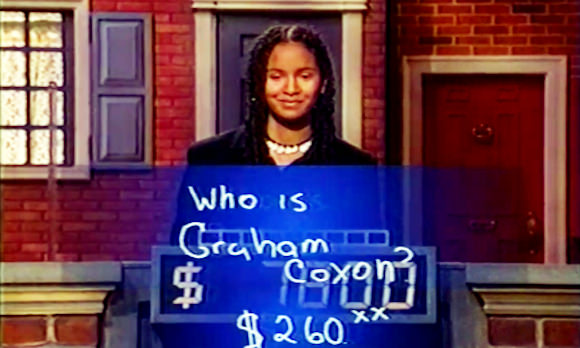 Alex found my answer bizarre, but said that though I was wrong (which, yeah, obviously), I had wound up with $7,540, making me the winner. “Local girl does well!” he announced.

Winning that episode of Jeopardy! felt like an important victory. I wished my nana could have seen me, but that wistfulness was alleviated by the incredible pride I felt when my mother and grandmother joined me onstage. I felt like I’d done a good job representing for black kids, mixed kids, public school kids, Philadelphians, even Blur fans. Though I wouldn’t go much further in the tournament (as you can see in the above video), I ended that first game reveling in my achievement in front of my family, neighbors, friends, and every quiz-show-loving couch potato in America—and I knew that I had earned it. ♦

Alexis Stephens is a writer living in Brooklyn whose work has appeared in MTV Iggy, SPIN, and THUMP. She writes about music, pop culture, technology, and urban issues. You can read her work here or follow her on Twitter.