“Hip-hop was essential for me to recognize the good in me.” 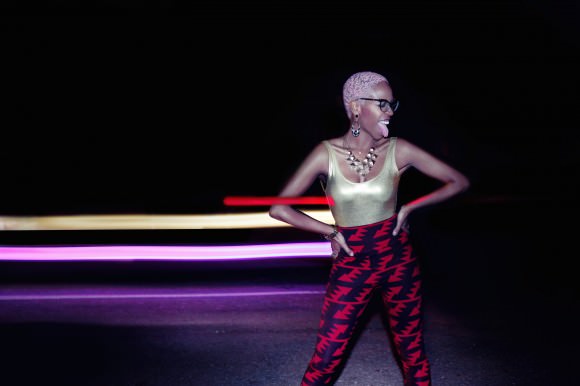 Last October, the Brazilian rapper Karol Conka released the video for her single “Boa Noite,” and we were captivated. It has Conka rapping powerfully over a percussive beat and a sample from the Brazilian group Baianas de Ipioca, and it also showcases a super-fun slice of Conka’s native Brazil, with shots of her friends breakdancing interspersed with images of traditional drums and whistles, religious icons, and a little statuette of a soccer player:

Rap music is one of the United States’ most important cultural exports, but often its dominance and values will stamp out local influences—it’s not uncommon to see videos by rappers from England, South Africa, Puerto Rico, etc., that look nearly identical to ones made by American superstars. It’s infinitely more interesting to me when hip-hop is incorporated into a local culture, becoming an influence and an ingredient, not an eraser of whatever was there before its arrival. Luckily, this is happening more and more: In the past five or so years, rappers and producers from all over the world have been folding their countries’ traditional music into more contemporary sounds, which is only a good thing for omnivorous music lovers. And as we found by listening to Conka’s debut album, Batuk Freak, which we’re psyched to stream here, she is one of those artists, someone who’s future-minded and innovative but also pays homage to the traditions and culture with which she grew up.

Conka was born in Curitiba, Brazil; her first public performance was at the age of 16, in front of her schoolmates at a talent competition. Batuk Freak was four years in the making, produced by her friend Nave Beats. Though my Portuguese is a little rusty, I’ve learned that Conká raps about finding power in her womanness, her blackness, her politics, her neighborhood, and her ancestors—a power that you might be able to pick up from the spirit and self-assuredness of her delivery, which is seriously fierce.

I spoke with Conká via email, with her answers translated from the Portuguese by her manager.

JULIANNE: Your first time rapping in public was in a school competition when you were 16. Had you been rapping at home before then or the competition was the first time?

KAROL CONKA: I used to make rhymes a long time before this, but not thinking of rap. I wrote verses and poems since I was five years old. Most of them I wrote to my father.

Was it hard for you to break out your skills in front of your classmates like that?

No, no. Fortunately, I never felt intimidated. I was always very comfortable in public and I remember not having been anxious or nervous. It was very natural. And it showed me that this was the path I wanted to follow.

You have performed both by yourself and in a crew. Is there a difference between collaborating and doing it all on your own?

When it’s a group, there are other people to share the creations, concerts, and anything that involves music. When I started to sing by myself, I saw that most of ideas would have to be mine. This gave me more freedom to do my job. Today, I have no desire to form a new group.

Curitiba is considered one of the great modern cities of the world. How did growing up there influence your art?

Yes. Curitiba is a modern city, but it has serious problems. I grew up in a poor neighborhood, lacking in some basic services. Moreover, Curitiba carries a veiled prejudice against blacks. I suffered much bullying at school. I have no doubt that all this ended up being a fuel for me to express myself and directly influenced my art.

You are a hip-hop artist, but you use a lot of traditional Brazilian beats and percussion in your songs. What did you grow up listening to?

In how I understand the lyrics for “Boa Noite,” you’re making a big statement about being true to yourself and loving music. Is that the case?

It is exactly that. I wanted this music to be my business card. I wanted to show my potential to be one of the representatives of the Brazilian rap. The lyrics speak of self-esteem and self-affirmation, always “without fear of error” (“sem medo de errar”).

What was the process of putting together your album?

It was lengthy and productive. The production lasted a year because after the release of “Boa Noite,” I began to travel extensively to shows. These trips were essential for sound research that me and beatmaker Nave did throughout this process. The lyrics are all mine. The songs were done in partnership with Nave. He added the Brazilian beats and traditional elements that I so wanted in my work.

What’s the most important thing about your art? What do you want our readers to take from it?

Originality, spontaneity, confidence and self-esteem. I want them all to feel comfortable with [those things]. Hip-hop was essential for me to get me to accept and recognize all the good that is in me. I really want my music to inspire the same thing in other people. ♦