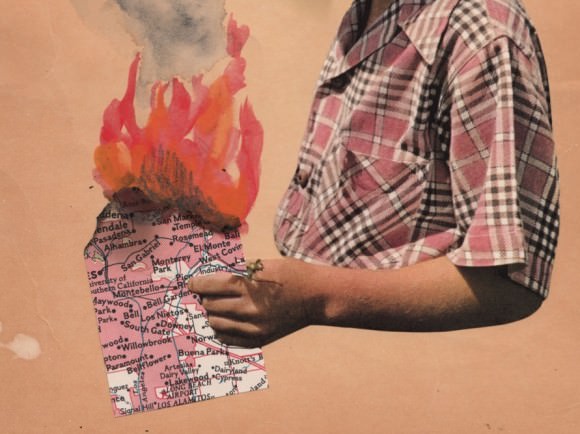 I have no idea what I’m doing. I’ve spent years pretending otherwise, but it’s true. I used to stay up every night until two or three in the morning, making panicked to-do lists that I believed would get my life back on track, but the motivation to follow through with those often unrealistic plans (e.g., “move out of my parents’ house by June”) when that was two months away and all I had for money was a part-time minimum-wage job) would fade as the sun came up. I’d repeat the whole cycle the next night. I drove myself crazy.

This is what’s often called “being lost,” especially by the adults in your life, who constantly admonish us to find “some direction” in life. From the moment you stop wearing diapers (maybe, no judgment!), it seems, everyone starts asking you, “What do you want to be when you grow up?” I mean, it’s not like anyone was really gonna hold you to your answer, but if that’s the case, why ask a four-year-old? It conveys the message that you’d better start strategizing about your future as early as you can, even when your short-term plans include eating Play-Doh and wetting your bed.

As you get older, the questions get more specific: What colleges are you applying to? What will your major be? What are you going to do after you graduate? Then, later: What, you’re not married yet? Are you going to have kids? Why don’t you want kids? Who will take care of you when you’re old? Do you have enough money to retire? And then: What will you do now that you’ve retired? Do you want to be buried or cremated? ENOUGH!

Even if you do have answers to all these questions, life doesn’t care what your answers are. Life doesn’t play well with people who know exactly where they’re going, because life is an asshole.

I used to have everything figured out. After I graduated from high school, I was going to go to a community college for two years to save some money while studying photography. Then I would transfer to a four-year university, graduate with a fine-arts degree, and then I would snag an internship at some amazing magazine, where I’d learn a bunch more about photography. All of this training would make me a lock to become a grip at various big photo studios, and by the time I was 30 I would definitely be a great, famous photographer along the lines of Annie Leibovitz or Cindy Sherman. Life was going to be AWESOME.

Then came the crippling depression, the slipping grades, the “sorry, but we don’t want you at our college” letter, and the realization that I don’t even really like taking pictures anymore, and everything I thought I had wanted was gone, which only strengthened my belief that I was an utter failure.

And I had, indeed failed. I’d failed at everything I thought I wanted. Somewhere along the way I got so focused on my plans for the future that I stopped paying attention to what was going on with me in the present. I had been battling depression since high school and I was so afraid that getting thrown off track that I just kept pressing forward, chanting, “Don’t fuck up, don’t fuck up, don’t fuck up,” like a way less posi little engine that could.

Then my therapist, a woman I started seeing after I got my heart broken for the first time, asked the simplest question. I told her I had messed everything up, and she just goes, “So what?” I was stunned. I wanted to scream, “Now everyone knows I’m a failure!” But I just laughed. She was right, and I felt so dumb for not realizing it sooner—my decisions weren’t life-or-death scenarios. They affected me and only me. No one cared if I became a photographer. I could do anything I wanted. The freedom I felt almost knocked me over.

Life is like a river, OK? (Stay with me.) I mean it is fluid; the water just keeps on moving, and we have to move with it. Our plans for the future need to help us move forward; if they don’t, they’re like anchors we’ve tied ourselves to. They’ll drown us. That’s what happened to me: I stayed on the track to go to college and be a photographer for years longer than I should’ve. I’d get frustrated, drop out of college, get depressed, then go back—all because I was unwilling to admit that I had changed.

So I stopped making plans, and I started taking action. I looked for opportunities that felt interesting right then, in the present, and tried to not worry too much about the possibility that they’d end in embarrassing disaster. My new life goal was to just keep moving.

On a whim, I applied for an internship for a Seattle newspaper (ignoring the pricey 45-minute commute and my own lack of experience) and that evolved into a job at a kick-ass weekly paper working with some of the smartest people I will ever share office space with. I hosted a radio show with zero radio experience, I wrote a cookbook, I got mentioned on the Wikipedia page for the Phil Collins song “Against All Odds (Take a Look at Me Now)” because my sister once dared me to listen to that song every waking hour for a week, and take a look at me now! I get paid to have conversations with some of my favorite musicians and hockey players for the Stranger and the Nashville Scene! And I write pretty regularly for Rookie! I didn’t plan for any of this, and it’s all pretty amazing (I’m especially proud of that Phil Collins thing). I’m telling you this not because I want to brag about the fact that I worked with Dan Savage or that I once baked cupcakes for Rosie O’Donnell (although both are true—self high-five), but because none of these opportunities would’ve come to me if I didn’t allow myself to wander, to be a little bit lost.

So the next time someone asks you what you want to be when you grow up, channel a bit of my therapist’s spirit and be like, “Who cares?” You don’t have to know right now—so long as you keep it moving. ♦

Megan Seling is a writer and baker currently living in Nashville (with a big chunk of her heart still living in Seattle). She yells about music, sugar, and hockey on Twitter.