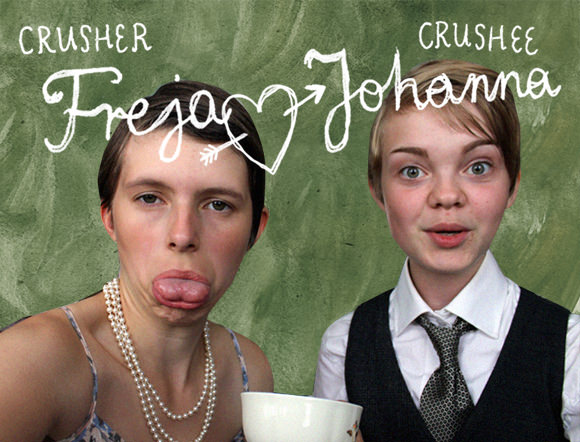 When Anaheed showed me this email from crusher Freja, 18, about her friend-crushee Johanna, 16, you would NOT have wanted to be in the room with us—we were full-on screaming about how cute their relationship is. So I bet you can imagine how hard it was for me to stifle EVEN LOUDER shrieks when I got to talk to Freja and Johanna over the phone about their friendship, and they were both even more wonderful than they seemed on first glance. I kept it together, though, and tried not to freak them out too hard as they told me the following (incredible) saga of their companionship, but now I no longer have to stifle what I’ve been longing to proclaim to the world, and what will become clear to you as you read these interviews: THESE TWO ARE THE BESTTTTTTTTAIEEEEEEEEE! —Amy Rose

I want to nominate my bestie Johanna for Friend Crush since she’s one of the most awesomest people in the whole wide world. We met two years ago at an IRL meetup for a website we both like, then we just happened to find out that we live in the same neighborhood, just a few houses apart. One of us asked the other, “Hey, since we’re neighbors, why don’t we bike to the meetups together?” So we did, but we were really awkward at first and our conversations mainly consisted of questions like “Do you want me to slow down?” One day, when we were on our way home, I invited Johanna over for tea, and we finally started to talk. We haven’t really stopped talking since.

Sometimes we create things, such as our own version of Cluedo, or a Hogwarts Express costume out of cardboard. Or we “go abroad,” which basically means wearing foreign clothes, eating foreign food, watching foreign movies, and pretending that we know how to speak other languages. So far we’ve “been to” France, Japan, and England.

Johanna likes books, tea, good music, dark chocolate, awesome TV shows, and Harry Potter. I like dark chocolate, awesome TV shows, books, good music, tea, and Harry Potter. It’s kind of obvious that we were meant for each other. We don’t look alike, but about five random strangers have asked if we are related, and two asked if we were twins. They could probably sense our twin souls.

I introduced her to Harry Potter conventions and peanut-butter-and-banana sandwiches. She introduced me to Coldplay, Muriel Barbery, and brie cheese. Together, we discovered and indulged in Doctor Who, the pronoun fish, and apples with chocolate sauce. I owe her my life.

ROOKIE: Why didn’t you and Johanna talk much at first? Were you nervous?

FREJA [crusher]: No—I just didn’t know what to talk to her about at first. And we’re both kind of awkward people. We have bad social skills! [Laughs]

When you did start talking, what did you talk about?

Well, I invited her over for tea one day. We sat on the sofa in my kitchen, and once we started talking, we talked all night long—about everything! We both love books, especially Harry Potter, and we like the same music.

When did you know she was your best-best friend?

It was an evolutionary process. [Laughs] Even though we live so close, we started writing letters to each other in the beginning. We wrote them to explain our life stories, and to catch up on everything we’d missed. We only met about three years ago, so we had a lot to learn about each other.

What did you want to tell her about yourself?

[My letter] was about how hard friendship can be. We wanted to be able to build a stable friendship and not lie to each other.

Was that something you had had issues with in the past?

Not lying, exactly—more just not telling each other everything. And misunderstandings.

What is your favorite memory of something that made you laugh really hard together?

She always laughs at my jokes, even when they’re stupid. When we went abroad to Japan, we learned the words sugoi and kawaii, and just repeated those words over and over because we didn’t know anything else. Sugoi means good, and kawaii means cute. So when something good or cute happened, we would just scream, “SUGOI!!” or “KAWAII!!!” That was basically our whole conversation all day long.

It sounds like you guys really mastered the language! What was it like when you went to France?

That was a bit easier, because we both know Spanish, and we know some basic French. We can say “voilà” and “croissant.” We improvised a mix of Swedish, French, Spanish, and English.

Are you friends with each others’ friends, or is your friendship entirely its own unit?

It depends! We have some friends in common, from the picnics, but we hang out on our own every other day.

Do your families know each other? I would imagine that, since you live so close and hang out so much, your parents have met.

Not that much, actually. But lately we have tried to make them meet each other. We invited them to my place for a dinner and showed them the photos from when we went abroad, and then they started talking, and I think they have talked since then.

So maybe you and Johanna’s parents will have Friend Crushes on each other someday! How is your game of Cluedo, which we call Clue in America, different from the regular one?

We use characters from different fandoms, like Twin Peaks and Harry Potter, and different weapons. The room in the middle of the board is the TARDIS from Doctor Who.

What is Johanna’s favorite fandom, and who is the character she’s most like in it?

Right now, it’s Twin Peaks. And she really loves Audrey Horne—I do think she’s a bit like her, too! I think she would be flattered to hear that. She likes to go her own way. I keep thinking about the scene in Twin Peaks where Audrey Horne famously dances her own way. That’s like Johanna, because sometimes she plays that she’s my cat! She nudges me with her nose and meows, and I pet her on the head. [Laughs]

Now, can you explain “the pronoun fish”?

Do you know role-play on the internet? Where you write stories together? We had this silly idea that we would write a role-play about fruit flies.

Yeah. We started thinking, What do fruit flies think? Who are they, anyway? And they don’t have genders, so we decided that their pronoun would be fish.

I have no idea. It was the middle of the night.

Word. Amazing. I’m going to call Johanna in a moment—what’s an inside joke I can mention to her that she’ll freak out about?

Ask her about our secret handshake.

Will do! Thanks, and have a great night! 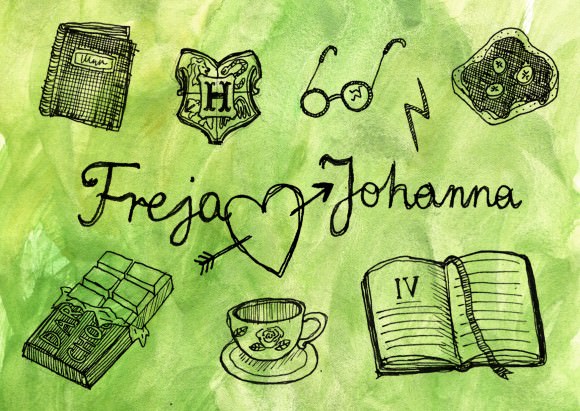 JOHANNA [crushee]: Well, it’s the last little bit of spring vacation, so I’m getting ready to go back to school.

Ew! Did you get to see Freja a lot while you were off?

Yeah. We hung out every day that she was around—she was in Edinburgh for the first part of it. I missed her!

Freja told me to ask you about your secret handshake. What is it, and how do you do it?

Well, it’s silly, but I think it’s very special. We rub our ears against each other—it’s a really awkward position, but it’s our inside joke. We don’t do it in front of other people that often! We’re pretty weird! I mean, we really are. But that’s what I like about her.