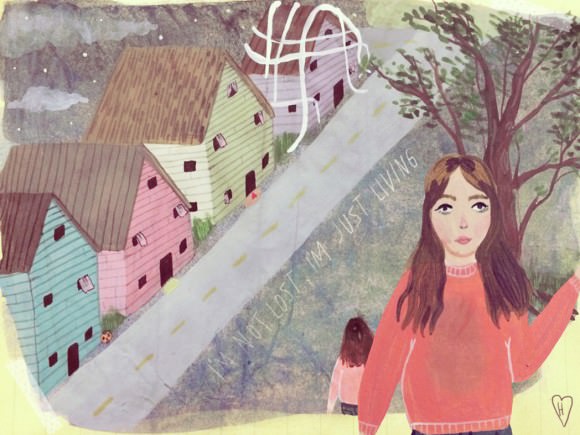 You know how there’s that terrible chamber in your brain where everything any girl ever said to you in Regina George Voice echoes over and over, even years later? Thanks to one such occasion in sixth grade, I remember the exact moment I realized that I have a “bad sense of direction” so vividly that it still stings a little.

It was Halloween night, and some of my friends had come over to trick-or-treat near my house. We were in that phase when you’re old enough to pretend you’re too cool to take part in that baby stuff, but young enough to totally still want to, because FREE CANDY. The official costume of this attitude was “freak”—this meant wearing a weird (but not too weird) outfit, multiple pigtails, and optional glitter. In accordance with this uniform, we freaks took to the streets, swinging our pillowcases in our wAcKy pigtails.

Since we were in my neighborhood, everyone assumed I would lead the way…except for me. When my friends realized I was taking them in circles, none of them were happy about it, but one particularly intimidating girl (let’s call her “Nicole”) seemed angrier than the rest. Her words will probably ring out in my Regina George chamber eternally: “WHAT THE HELL, LINDSAY? How does somebody get lost…IN HER OWN NEIGHBORHOOD?”

I stood there, blinking in my oh-so-freaky feather boa, feeling confused. I could very easily wander off to some unfamiliar place in my own neighborhood—not just because it was large and labyrinthine, but also because, each time I walked around my block by myself, I discovered new things that I hadn’t noticed before: a gigantic, swaying willow tree in full bloom, a house with weird stone lions guarding its driveway…once, I even wandered into a field in my neighborhood and just in time to see a HOT AIR BALLOON LANDING. (And they say the suburbs are BORING.) Since I loved walking around with no particular destination (and never knowing what kinds of cool things I’d see), I couldn’t be “lost,” a word which, for most people, signifies an unpleasant feeling of annoyance, and even danger—an experience to be avoided.

That Halloween was the first time I understood that some people are very suspicious of anyone who does not know exactly where they are going at all times. In the 15-ish years since that night, our culture has become even more obsessed with eradicating the state of being lost. Thanks to computers, GPSes, and smartphones, we often have instant access to maps of anywhere in the world and apps that predict our exact time of arrival. People walk around with their eyes down, glued to the digital compasses that navigate their every step.

Maybe you think this certainty and efficiency is a good thing. Well, in some ways, it is! When I’m visiting an unfamiliar city, running late to meet a friend, or walking through a neighborhood that feels a little sketchy, I’m comforted by the fact that I can instantaneously load up a map that will tell me exactly where I am and where I need to go. But I worry sometimes that I grab for that comfort even when I don’t really need it, and that there’s a larger problem with that: My friend Matt once told me that he’s noticed the ripple effects of our collective GPS dependence in that, now, when we’re lost in a more abstract, emotional (and maybe spiritual) sense, we expect easy, instant, and exact solutions to those uncertainties, too. You might think it’s a bit of a leap, but, to me, it’s worth asking: What do people lose internally from never having to be lost geographically?

I found some answers a few months ago in an essay collection by the writer Rebecca Solnit. (You might know her name from this incredible piece about “mansplaining” that she wrote a few years ago.) That book, the poetically and paradoxically titled A Field Guide to Getting Lost, is all about redefining the idea of being lost as a positive, and maybe even necessary, part of being human. As she writes in the first chapter:

The word ‘lost’ comes from the Old Norse “los,” meaning the disbanding of an army, and this origin suggests soldiers falling out of formation to go home, a truce with the wide world. I worry now that many people never disband their armies, never go beyond what they know.

I worry this too, Rebecca! Ever since my confrontation with Nicole all those Halloweens ago, I’d been self-conscious about my wandering ways, and I associated being lost with shame: In our increasingly efficient world, some people think of aimless traveling as capricious or lazy—a waste of time you could have spent working. But what if, instead, we focused on the very productive ways in which it can expand our ideologies and experiences? In reading Solnit, I’ve come to consider “lostness” as conducive to new possibility, exploration, and imagination, all thanks to passages like this one from her most recent book, The Faraway Nearby—TAKE IT AWAY, REBECCA:

Once when I was in my late 20s, I drove to New Mexico with my friend Sophie, a fierce, talented, young black-haired green-eyed whirlwind who had not yet found her direction. We had no trouble convincing ourselves it was worthwhile to drive the two days each way to New Mexico because there was a darkroom there that she could use to print photographs for a project we had. In those days we were exploring who we wished to become, what the world might give us, and what we might give it, and so, though we did not know it, wandering was our real work anyway.

When I first read this last sentence, I had to underline it in SEVERAL DIFFERENT KINDS OF INK, so thoroughly did it rewire how I thought about wandering. It also made me think of one of my favorite movies of the past couple years, Frances Ha, which follows a protagonist our culture would definitely consider “lost.” She has trouble finding a stable apartment, a career she’s passionate about, and an overall sense of—you guessed it—direction. But, in this gorgeously filmed and written story, looking for an ATM in an unfamiliar neighborhood comes across as well-choreographed slapstick routine, awkward moments are actually beautifully serendipitous encounters, and something as simple as running through your neighborhood by yourself can feel like an epic adventure. (I suspect a lot of this also has to do with the killer soundtrack: Sometimes when I am running late and have to sprint somewhere I cue up David Bowie’s “Modern Love” and pretend that I am Greta Gerwig.) Not knowing where you’re going and what you want to do with your life seems not only acceptable, but glamorous.

Thanks to Rebecca and Frances, I see being lost as a positive, and even radical, act—a decorative curlicue in our increasingly linear world. Anytime I wander around without a clear destination, or even try to find a restaurant without consulting Google Maps, I feel like I’m defying a part of our culture that speaks to us in Nicole’s impatient voice: ALWAYS KNOW EXACTLY WHERE YOU’RE GOING. CALCULATE THE MOST EFFICIENT ROUTE. FEAR THE UNKNOWN. It might sound silly, but walking around GPS-less is the closest I get to come in my everyday life to feeling like an explorer. In my head, I’m setting off into the void, looking forward to stumbling upon surprises along the way.

I should have known this all along, especially given what actually happened at the end of that Halloween night in sixth grade. We band of freaks took the long way around my neighborhood, but we eventually made it back home, of course. By the time we did, nobody was even mad at me anymore: Entirely by accident, I ended up taking us on a street I’d never been down before, and that was how we found the house that gave out full-sized candy bars. ♦

Lindsay Zoladz is an associate editor at Pitchfork.