A premiere of a new tune and a talk about writing, Simon & Garfunkel, and man-repelling band names. 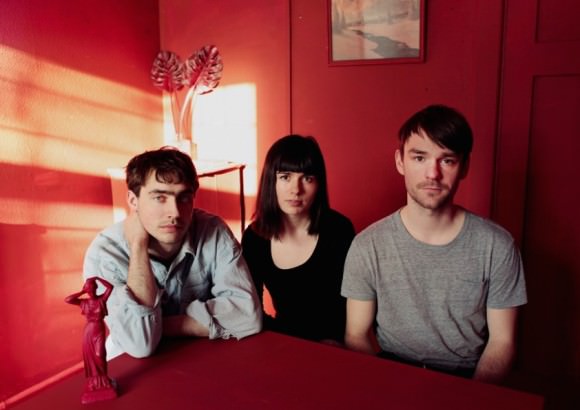 Fear of Men, a band from Brighton, England (also the birthplace of the Pipettes, the Go! Team, and Natasha Khan of Bat for Lashes), started as an art school project by the singer and guitar player Jessica Weiss: a group of short films that used writing by the diarist Anaïs Nin to explore ideas about mortality and anxiety. Daniel Falvey, who now plays guitar for the band, heard the soundtracks that Jessica home-recorded for those movies and asked if she wanted to make music together, and they started writing and recording jangly, layered pop songs whose lyrics reference art and philosophy. Their first full-length, Loom, is coming out next week; in the meantime, we’ve got a sneak peek at one of its songs, “America.”

On a recent video Skype with Jessica and Daniel, I asked them about songwriting, Simon & Garfunkel, and man-repelling band names, and I got a glimpse into the dynamic of their music-making friendship.

CAITLIN WHITE: Before this interview I googled “Fear of Men” and the top results were for your band; a couple years ago the first page was all stuff about androphobia, the psychological term for an “abnormal and persistent fear of men.” That’s a positive development!

JESSICA WEISS: I had been thinking about mental illnesses and anxiety disorders and was researching androphobia [when the band formed]. I like that it seems to have different meanings and work on different levels. You can kind of read it in reverse: what men fear. There’s something quite enigmatic and strong about it, even though it’s about being afraid.

DANIEL FALVEY: We’re trying to incorporate what may be perceived as “highbrow subjects” into quite direct pop songs. Some people might think that’s pretentious, but we’re not interested in dumbing ourselves down. I like the name because I think it puts off a certain person. You’ll hear artists saying they do shows and don’t recognize their audience. I don’t think we’d ever have that problem. Because we’re called Fear of Men, we wouldn’t have a load of lads or jocks come to our shows.

JESSICA: It’s anti-macho. I guess it’s like Nirvana: They were a feminist band, and they ended up with these fans they didn’t recognize or like. I couldn’t get into them for a long time, because when I heard them at school it was through a bunch of guys who were the only people who played guitar at school. It felt like a “guys only” thing, when that’s totally not what the band actually stood for as people. I came back to it later and was like, Oh, this is actually really awesome and exactly what I like.

We’re premiering your track “America.” What does America mean to you, as an idea?

JESSICA: We chose the word America because it sounds really nice and, for us, it’s this slightly mythical idea of a place that’s far away. It makes me think of landscapes and things that are unknown. It’s a very enticing idea.

DANIEL: What were you thinking about when you were writing the lyrics?

Thanks, that was my next question!

JESSICA: [Laughs] In the chorus [“Drifting out of reach / America, carry her away”], America was kind of a metaphor for escapism. There’s kind of a danger and unpredictability to the idea of America, but it’s still very enticing. And a lot of [the song] was about losing a friend, when you’ve been very close to someone and something happens to your relationship—when nothing is the same again.

DANIEL: When I think of America, I think of [Charles] Bukowski. When we went to L.A., especially, it felt like I imagined it would from reading American books from the 1950s. In a weird way, L.A. looks like modern American literature.

Simon & Garfunkel have a song called “America” that’s one of my favorite songs on earth. Your song goes into a big climax in the middle that’s similar to an interlude that happens in the Simon & Garfunkel song.

DANIEL: I was listening to Simon & Garfunkel a lot, actually, around the making of this record. We were driving the engineer mad because I wanted it to sound like the speakers were breaking during that part! Throughout the record I kept trying to get that kind of sound.

JESSICA: In the end, [Daniel] shook my amp to death for like an hour and now it’s totally broken!

DANIEL: Actually, I didn’t tell you, Jess, but I cut a bit of the speaker as well to make that noise part for “America.” When we came to America for the first time, we played [the Simon & Garfunkel song] when we were touching down. I couldn’t stop listening to it. It means a lot to me. ♦