We premiere her new song and have a chat about war, sexism, and cultural stereotypes. 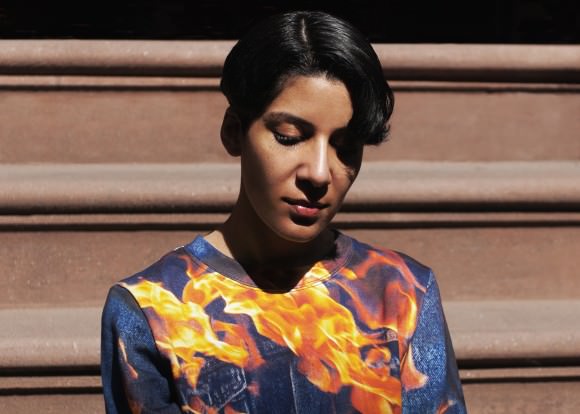 Fatima Al Qadiri is a New York–based visual artist and musician who grew up in Kuwait during the 1990–1991 Gulf War, after Iraq invaded her country and the U.S. declared war. She has drawn on those formative years to make incredible music (under her own name and as Ayshay) that explores dance subgenres like juke, dubstep, grime, and hip-hop, as well as traditional religious songs from Islam and Christianity, unlike anyone working today.

On her new album, Asiatisch (out May 5 on Hyperdub), she’s examining and critiquing what she calls an “imaginary China,” an interpretation of the East as dreamed up by the West, rife with stereotypes. (She also does a beautiful cover of Sinéad O’Connor’s “Nothing Compares 2 U,” sung by Helen Feng.) We’re so happy today to premiere the single “Shanghai Freeway” from that album:

I recently interviewed Al Qadiri via email as she packed for Europe, where she’ll spend the next three months showing her visual art.

JULIANNE: With Asiatisch, you’re examining a Western concept of a faux China. What about that idea interested you in particular?

It’s about being exposed to a Western construct. It’s a catalog of dislocated stereotypes that’s been building over centuries, but became pronounced in the age of mass media. It’s a concept that a lot of people can relate to, regardless of where they’re from.

I couldn’t help thinking about the Wu-Tang Clan when I was listening to it. Their use of kung-fu imagery from the movies really fetishizes certain aspects of Chinese culture. What specific stereotypes were you thinking about when you were making this album?

That’s the thing—there are so many stereotypes to choose from. It’s a big buffet! [My] song “Dragon Tattoo,” for example, engages with the idea of physical prowess, martial arts, body art, and machismo. You immediately imagine certain things when you hear the words “dragon tattoo.” Everyone has associations of their own with these stereotypes.

But the West’s interaction with China can’t be summarized here—this is more about the former constructing a false “other” to villainize, a common strategy used in war.

I lived in my imagination for the most part. It was an indoor and insular life, being a young girl in ’90s Kuwait. Video games were one very effective way of escaping reality. As was listening to Gregorian chants.

Indoors by necessity, because of the war?

Yes, during the occupation and war, indoors by necessity. But also after that, because my strict parents feared predators. They wouldn’t let us outside without an adult chaperone.

I still feel like the journey is just beginning for me. I do remember coming to New York when I was 18, and thinking, I need to be here. It’s the city that matured my work and ideas the most. I would not have guessed this is the kind of work I’d be making. I honestly wanted to be a composer, in the classical music sense. Then I took a college class in composition and came to the conclusion that orchestral music was too limiting.

Did your parents encourage you to explore and act on your artistic impulses?

I know if it wasn’t for my mom’s support I wouldn’t have reached even a quarter of this juncture. My dad didn’t take art or music seriously as a profession. I’m extremely fortunate to have my mother.

What was the first piece of music you made?

I was nine years old. I made a melody on a toy Casio keyboard. I improvised it, and then memorized it in order to play it again. I got hooked immediately.

You were born in Senegal, grew up in Kuwait, then lived in eight cities before moving to Brooklyn, where you live now, is that right? How did growing up globally affect your childhood? How did it affect your work later?

I have no memories of Senegal; I left at age two. Kuwait is where I’m from and where grew up. We went to London almost every summer, like many Kuwaiti and Gulf Arab families did at the time. Even going from Kuwait to London was a big, fantastic leap. England definitely had a long-term influence on me, especially musically. I was fascinated by British music and club culture.

Young women aren’t really encouraged to be music producers or to futz around with [the programs] Ableton and Serato or even just synthesizers the way boys seem to be. Did you ever come up against any discouragement, and what did you do? Do you have any advice for young women who aspire to be producers and DJs?

Sexism in the music industry is a given. It hurts, it’s repetitive, but there is sexism in countless professions, not just in music. I never let sexism get in the way of my vision. We have to be brave and rise above it. If you want to make music or DJ, just do it. All you need is a computer and software. ♦