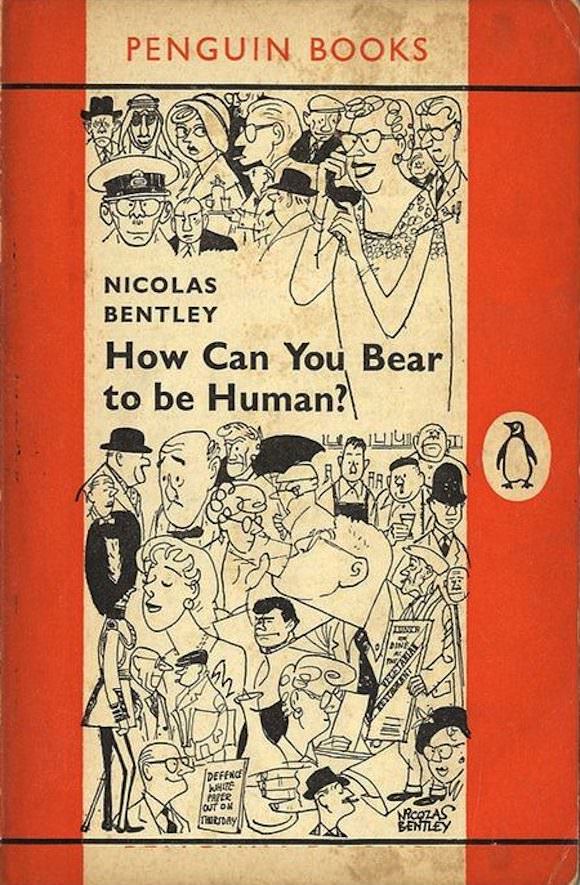 The first-edition cover of Nicolas Bentley’s How Can You Bear to Be Human? via Penguin.

This month’s theme is LOST AND FOUND. “Me time,” self-reflection, creativity. Rose sez, “Solitude can be a revolutionary act.” And Kanye sez, “I just needed time alone with my own thoughts / Got treasures in my mind but couldn’t open up my own vault.” And while I sometimes feel that we humans are all deeply connected, I more often agree with what Morrissey sed to us: that we are solitary creatures who LIVE AND DIE ALONE. I know it sounds awful, but except on particularly bad days, I don’t really find this bleak or depressing. I think it’s freeing to realize that you just have your own consciousness and that you can choose whatever you want to include your world. That you are your own best friend, and can even be your own role model.

Where it starts to get tricky is if you ever feel like your own enemy. You know how people have trouble with breakups because every little thing they see reminds them of their ex? I have often felt that way about myself, where I’ve been so UTTERLY SICK OF ME that even being in my own room is mortifying because it’s like ALL ME, EVERYWHERE. And I can’t turn to any of my usual favorite movies or books or any other safety-blanket tools because I’ve, like, copyrighted them as “central to my identity” or whatever. I can’t talk to my friends because they’re like, “Welp, I can’t make you like yourself, but, you know…you’re not that bad,” and I’m like, “BUT YOU ONLY HAVE TO SEE ME DURING OUR LUNCH PERIOD; I HAVE TO LIVE WITH ME ALL THE TIME.” I haven’t known this feeling for a long time (whaddup @ getting older). I think it happens at the apex of puberty and is heightened when you fully realize for the first time that you have to spend every day of your life with yourself. Your mannerisms, your habits, your face, your ugly laugh. Every hour. Of every day. Just. Like. This:

I stopped feeling like such a burden on myself by letting go of my aspirations to be (and disappointment when I wasn’t) as miraculously confident as Beyoncé or Madonna. Instead, I turned to comedians who have a sense of humor about their own issues, and who use these subjects to access greater human truths and connect with people. See: Tig Notaro’s standup act about her mother dying, breaking up with her girlfriend, and being diagnosed with cancer, which is also a meditation on using comedy to deal with life’s biggest sads. I also started reading writers who choose to look outward and discuss the world, but also use their revelations about art and relationships to access deeper parts of themselves in a constructive, interesting way. See: Chris Kraus turning art criticism into a rumination on attraction, feminism, and her experiences with both.

All of this led me to do a lot of my own writing, some to share with people and some to keep just for me. After a day of observing others, returning to myself and marking my perspective on everything and everyone I’d seen, like a dog peeing on a fire hydrant, felt like keeping a terrific secret. I began to understand that even when you write about the world, you are writing about yourself, and that I could either get bashful and worry about seeming like a narcissist, or I could go with it in the hopes of learning more about who I am and how I might come to hate that person less. Somewhere in my blackened heart, I contained multitudes. I’d have to learn to love some and try to change others, but could no longer shut them down altogether with knee-jerk self-loathing.

Not everything I’ve written is good, but what’s important is giving myself that space to let my own complexities unfold, instead of just accepting my “I SUCK” impulses as fact the moment they kick in. Well-written or not, these thoughts were mine, and “mine” slowly stopped feeling watermarked with innate horribleness. Having to be alone, to be with myself, for a walk to school or for the rest of my life no longer filled me with dread and fear—it became an opportunity to experience the world in a different way, like re-watching a mind-blowing movie to try to actually understand it. Eventually, I loved being in my room alone, surrounded by everything that formed who I am, and I gained the Beyoncé/Madonna-levels of confidence that I feel today. (In an infomercial voice: “Thanks, solitude!”)

So, the next few weeks of Rookie are not necessarily about being all “I DON’T NEED YOU!” as much as they are about the tension between being yourself and being a part of the world. (They might be best read from a lighthouse, gazing out at the sea, pondering life’s vast possibilities.) Rookie reader Bethany was the first to urge us to do a kind of melancholy seaside theme, and she summarized most beautifully what it’s like to make peace with being alone: “Water does not have to drown you or to trap you; it can lead you to someplace better. The ocean kinda feels like a labored metaphor for the future: cruel, expansive, and unknowable. But it’s also awesome in a terrifying sort of way.”