The premiere of an unreleased track and an interview with bassist Kathi Wilcox. 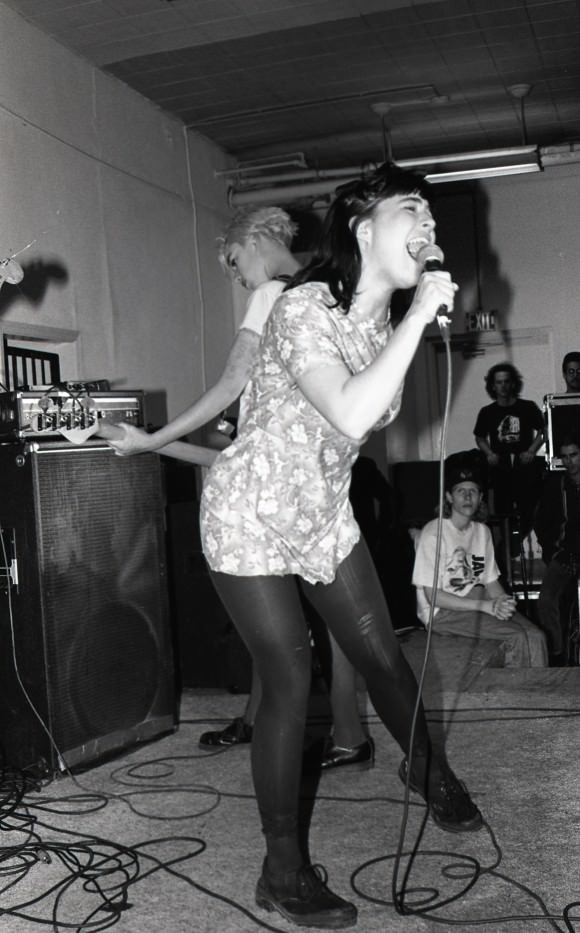 It’s safe to say that no one has had a bigger impact on my idea of “girl power” than the ’90s Riot Grrrl band Bikini Kill. Though they disbanded in 1998, the DIY ethics and girl solidarity they espoused still live on in the Tumblr feeds, zines, and bands of young feminists today. There’s no doubt that girls can still relate to wanting to befriend a “rebel girl” in the halls of their high school, or the uncontrollable desire to scream out about the mansplaining “white boys” in their lives.

I’m so glad the band recently formed their own record label, on which they’ll reissue their whole discography, along with as-yet-unheard early recordings. First up is the 1993 album Yeah Yeah Yeah Yeah, a split LP with the English band Huggy Bear that includes timeless tracks like “Resist Psychic Death” and the aforementioned “Rebel Girl.” The reissue, out April 15, also collects seven previously unreleased songs. Rookie is ridiculously excited to premiere one such recording, “Girl Soldier,” today!

I talked to the great Kathi Wilcox, the former bassist for Bikini Kill and a current member of the Julie Ruin (alongside BK singer Kathleen Hanna), about the evolution of her feminism, Riot Grrrl nostalgia, and why she thinks Twin Peaks sucks.

HAZEL: Why did Bikini Kill decide to reissue its catalog and premiere these rarities now?

KATHI WILCOX: It came from deciding to leave Kill Rock Stars, our old label. Tobi [Vail, Bikini Kill’s drummer] and Maggie, Tobi’s sister, had been working there pretty much since the beginning, and when it changed ownership [in 2007], they were both unceremoniously let go. We were starting to think, What is our band’s connection to this record label now? and that we should just put these out ourselves. It’s totally possible to do that now. When we were first going to reissue one, it was going to be the split record with Huggy Bear. We were trying to decide what to put on the B-side, so we went through all these old tapes of early stuff nobody had ever heard unless they were at the shows.

You told me that some of those songs are “weird.” What do you mean by that?

I was thinking about songs like [the previously unreleased track] “I Busted In Your Chevy Window,” which is just Kathleen doing spoken word. She used to do that all the time—she wouldn’t tell us she was going to. She would just launch into it, and we’d wait for her to be done before starting the next song.

There’s also the song Bill [Karren, the lead guitarist of Bikini Kill] sings. I don’t think people knew he used to sing a song during our first tour! A lot of these songs are just the three of us without Bill, before he even joined the band. They’re weird because [the songs] are not indicative at all of what our music sounded like later with the four-piece band. It was me on guitar, Tobi on drums, and Kathleen playing bass and singing.

Like many things from the ’90s, Twin Peaks is having a renaissance, which makes me curious as to what the upcoming song “Twin Peaks” is about.

Our band and Twin Peaks had both just started, and everybody that we knew, even punk rockers and people that we thought were smart, critical thinkers, was totally in love with this show. They were having these lasagna parties where they would watch it. We were so horrified and offended that our friends would be into this show that we thought was bogus and awful. It was quirky and ironic, but the whole premise is about this beautiful dead girl, and it seemed totally sexist and awful. But everybody was having these parties around us, and it became the focal point of our initial anger in our band [laughs], which, at the time, we thought was justified. We were like, How is this a good show?

A lot of Bikini Kill songs, like “White Boy,” still mirror conversations about sexual assault today. Do you think the band’s music is still relevant to feminist issues?

I think so. That’s the feedback I’m getting, that [the music] still speaks to people. In some ways, that’s really sad and depressing. It’s 20 years later, and the thing that that guy says at the beginning of “White Boy,” about how some girls are “asking for it,” hasn’t changed. That’s still a lot of what women are experiencing right now.

How would you define your feminism and activism today?

It’s not the same. When we were 20 or 21, we could devote our entire lives to thinking about this stuff. We were already in that really energetic mindset; we were spending all our time together and writing or making fanzines. I wouldn’t have said that we were activists, even. We were politicized musicians. We were focusing all our energy on our band because that was the political, artistic project we wanted to be doing.

The Julie Ruin is more like “the personal is political.” It’s not as direct as “fuck George Bush” and it’s definitely less angry. Kathleen and I obviously both respond to a lot of stuff going on in the world, especially the things that haven’t changed for women, but we don’t have that initial, 20-year-old anger anymore. Maybe we’ve just grown up a bit.

Do you think people get less angry when they get older?

I think it depends on who it is. I certainly know people who have gotten angrier as they’ve gotten older. I think as you start to see yourself gain more power in the world, and have more of a voice, you’re less angry, because you feel like you have an ability to change things? When we were 20, we felt like nobody was listening to us. It was a more concentrated anger.

The ’90s were obviously not an easy time for women in music. Is it weird for you to see people glamorizing that period?

I think if someone can take the good things out of it and recreate the positive aspects, that’s great. I have mixed feelings about nostalgia myself, but I personally have no problem with it. I don’t think it has to happen the same way the second time.

Part of our difficult experience with that whole period of Riot Grrrl was that our band was in the middle of this emotional confrontation with culture. Our friendships started to dissolve under the pressure. Then there was the media attention, which was a completely different thing. People thought our band was the devil. We always thought Kathleen was going to be attacked at a show. That was the stress we were worried about.

What I understand is that young people [now] are looking back at Riot Grrrl, and it’s fresh. They’re taking the cool stuff like feminism, or girls being nice to—not competitive with—each other, which is great. Hopefully people won’t go crazy and start attacking each other again. [Laughs]

Bikini Kill is such an inspiring favorite band for so many young women. When you were young, was there a band or artist in your life that you really looked up to?

When I was 14, I loved the Smiths. I loved Morrissey. My other favorite band was Beat Happening. I had these cassette tapes where one side was the Smiths and the other was Beat Happening, and I listened to them all the time. Beat Happening was a very formative band in terms of the way I thought about making music and interacting with culture. You didn’t have to be an expert to do something. It was OK to start a band and not try to sound like the Beatles. Beat Happening was like an invitation.

I think Bikini Kill is definitely an “invitation” for a lot of girls.

Our band was very influenced by Beat Happening and the scene in Olympia in terms of supporting people to do whatever they wanted. You could make a fanzine, or do woodcuts, and everyone was very encouraging and welcoming. It was like rock camp. [Laughs] That was the vibe Bikini Kill wanted to generate: that idea that “we’re here for you, we’ll listen to you.”

[Laughs] It kind of was, a little bit. But I suppose all utopias have their dark sides. ♦