The Art of Waiting

There’ll be plenty of time for inspiration after high school. Right? 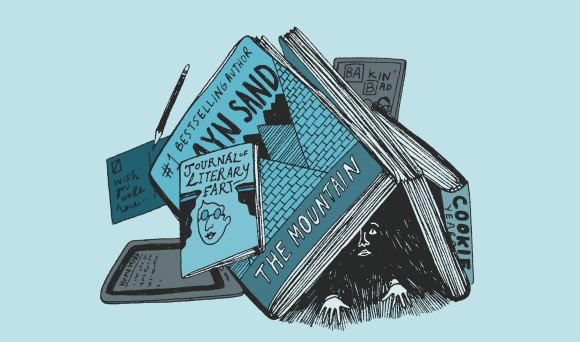 There is a book that sits on my desk called The Shape of Design. Frank Chimero wrote it in 2011 after raising money through a super-successful Kickstarter that I excitedly followed. I looked forward to the book for months and couldn’t wait for it to arrive; when it finally did, I opened it, flipped through its pages, admired its cover, and put it down. Three years later, I still haven’t read The Shape of Design. I have time to read it. I know how to read. I’m sure it’s great. But it still sits on my desk, where I put it down three years ago.

There are other things I haven’t read. I have a gigantic Instapaper account full of stories I know I’ll like. Every day, I add new links to it, ignoring the massive abyss of similarly interesting stuff below them. Music gets the same treatment: Bands I love put out new records; friends whose taste I like tell me about great old ones. I listen to a lot of music, but more often, I make lists of music to listen to. Perversely, I always seem to save the ones I’m sure I’ll love for last (which in practice means never).

When I’m not avoiding enjoying things, I’m avoiding making things. In an average day, I might come across anywhere from zero to 78 billion things that inspire me. I keep a little log of phrases that I think are cool or meaningful, along with questions and tiny ideas for things I want to write about. But most of these notes are born and die on that page. (Some of them have even been transferred to more than one new phone.) Of course, I can’t act on every little nugget of an idea, but at some point, old notebooks become dead weight. There are things worth remembering in there, but I haven’t gone back to look at them.

Why do I shelve books I think will become favorites, stack records I’m likely to love, and hold on to ideas I believe could be big? What am I waiting for?

In 2008, I was in seventh grade. Most of my friends were older than me, so they went to high school before I did, they got bummed out before I did, and when they would come back to elementary school to say hi, we lowly middle-schoolers would gather around to listen attentively as our elders laid it all out: High school sucks! It’s so much harder than middle school. But it’s actually, like, so easy. Dude, you have no idea. It’s crazy. You’re not gonna like it. But it’s, like, awesome.

I had imagined that high school would be like Willy Wonka’s factory, except with girls instead of candy and chemistry class explosions instead of Wonka’s machines. I was overly optimistic (and kinda silly), but still pragmatic: I knew I was too excited for my own good, and that I was headed for disappointment. But that’s not what scared me.

Not caring scared me. Apathy scared me. I was afraid of being jaded, over it all, before I’d even experienced very much. I could deal with high school being less than I had imagined, I thought, as long as I didn’t stop caring.

By that point in my life, I had experienced anxiety disorder, which caused me to cling to optimism like it was my lifeline out of hell. I had seen kids unhappy with high school and adults who seemed anything but thrilled with life, and my worst fear was that what (I assumed) happened to them would happen to me–that some new feeling would take over and force me to stop liking life.

I bundled myself in defense mechanisms like a toddler wearing 15 layers of winter clothes. Thanks to my great parents and a great teacher and my fortunate life, I used relatively healthy things to cope with my fear (overworking, over-apologizing), but still, I thought a lot about this “disease” of apathy and dreaded its inevitable takeover of my life.

Then, because it was inevitable, it happened—but not in the way I thought it would.

I started catching myself trying to be less excited about things. These moments happened more and more frequently over time, until every moment of joy was succeeded by anxiety. I didn’t want to read or watch or listen to great things because I didn’t want to be inspired, because I didn’t have time to do anything creative, and when I did, my work sucked. It became easier to hide inspiration behind endless lists, to tuck it safely away into notebooks, than to take advantage of it. I still loved life, and I was still my normal optimistic self—but I started to wait.

That’s why high school, or a crappy job, or any other restrictive circumstance can be dangerous: They make dreams too painful to bear. To avoid longing, we hunker down, wait, and resolve to just survive. Great art becomes a reminder of the art you want to be making, and of the gigantic world outside of your small, seemingly inescapable one. We hide from great things because they inspire us, and in this state, inspiration hurts.

I tell myself that I’ll have time to be inspired after high school. In the meantime, I keep shelving books, stacking records, and collecting notes and song ideas. By squirreling things away in lists, I ensure that I’ll always have more to enjoy, to feel proud of and to love—as soon as my waiting period ends. It’s like saving the best bite for last: You don’t do it because you’ll enjoy it more later—you do it because you want to know that it will be there for you to enjoy, later. It feels like I’m building an arsenal of curiosity, but I’m really just afraid of life after hibernation.

What if I burn out? What if these years are my best, and the rest suck? Ironically, these were almost the same exact fears I had going into high school. The only difference is that, this time, I’m not afraid that my love of life will be stamped out; I’m afraid of leaving it behind. I don’t want these years to be my best. I don’t want to see them as the time of my life, when they’re just a time in it (albeit a really, really special one). Because if they were the time, then I might spend the rest of my life longing for the past. And that would be worse than waiting for the future.

I turned 18 in December, which made me happy, because 18!!!, but also a little bit sad, because I knew it was a milestone that I could no longer be waiting for. Next, I’ll graduate, and then I’ll have a choice: I can stay scared of failure and success, or I can relax and choose not to be so precious.

I used to hate hearing that: Don’t be so precious. I thought that it meant “don’t care so much.” But now I know what it really means: Don’t fear so much. ♦

Spencer Tweedy is a musician.