These looks are part of a balanced wardrobe.

How to Chanel-ify Your Face

Is there anything cereal can’t do? It’s delicious, nutritious (well, sometimes), and, much like pizza on a bagel, it can be eaten anytime. And what other food lets you eat a spoonful of oats AND tiny moon-shaped marshmallows at the same time? As if all that weren’t enough, one of the most fun foods available to us is often represented by some of the most unlikely style icons: the cartoon mascots who’ve been gracing the brightly colored packaging of the cereal aisle for decades now.

Now, I know that these characters have a nefarious side—they are used to sell sugary cereal to kids, and it works. But I grew up as one of those kids, reading the little factoids on the backs of many cookie- and marshmallow-based cereals before so school each morning, and I can’t help feeling a sentimental love for these dudes and their rad style. Also, if I can keep it as real as possible, there’s NO kind of style on the back of an All Bran box, so whatever, let’s have some fun.

What I’ve noticed over the years, in terms of cereal-box-character style, is that accessories are pretty much everything. For example: Tony the Tiger, of Frosted Flakes fame, is so busy yelling, “They’re GREEAAAAT!” at everyone that he has no time to coordinate an entire ensemble. Dude is also a tiger, and generally they’re not too into skinny jeans or what have you. But he still bothers to make a statement by wearing his trademark red bandanna wherever he goes. A signature piece! Rad City. Also? It’s personalized. I’ve always had a soft spot for personalized stuff—it takes confidence to rock your own name (see also: Dig’em Frog, who keeps it casual while wearing a personalized shirt).

Snap, Crackle, and Pop are also up on the personalization trend, with all three gentlemen wearing their names on their hats—though the only name that truly matters is Pop, as he is clearly the most stylish member of the Rice Krispies trio. Look at that jacket! So fresh. (Cap’n Crunch, below, has a similar jacket style.) I’m not sure if he’s dressed to lead a band or an army, but it works. To their credit, Crackle’s bangs are out of control in the best way, and Snap (also wearing a red bandanna) has the best shoe/jacket combo; I’m obsessed with his yellow oxfords.

Also prominent on the jacket front: Sonny the Cuckoo, from the Cocoa Puffs box. This is a vintage look for Sonny—and his best one by far. It kind of has a demented-barbershop-quartet vibe to it, but it looks great, and his cereal-crazed expression is too real. Who wouldn’t make that face if given a spoon and placed before a giant bowl of Cocoa Puffs? No friend of mine, that’s for sure.

It must be said, however, that the most stylish crew of the cereal aisle is most definitely General Mills’ monster-cereal crew—represented here by Franken-Berry and Count Chocula. Look at Franken-Berry’s glasses! Your uncle who spends too much time on BoingBoing would flip out over the steampunk look, no? And you can’t really go wrong with a vampire’s cape and what appears to be Jerry Seinfeld’s puffy shirt, so Count Chocula gets major style points, as well. Add his the ability to make chocolate-flavored marshmallows float in the air, and this guy’s flair is just unbeatable.

My final favorite is Quisp, the mascot of Quisp cereal. He’s super on-trend right now with the jumpsuit, right? And again, we have personalization in the form of an initial belt. And the propeller on the top of his head makes this whole look even better.

All told, there are tons of ways to look as fly as your breakfast table! Here are but a few suggestions: 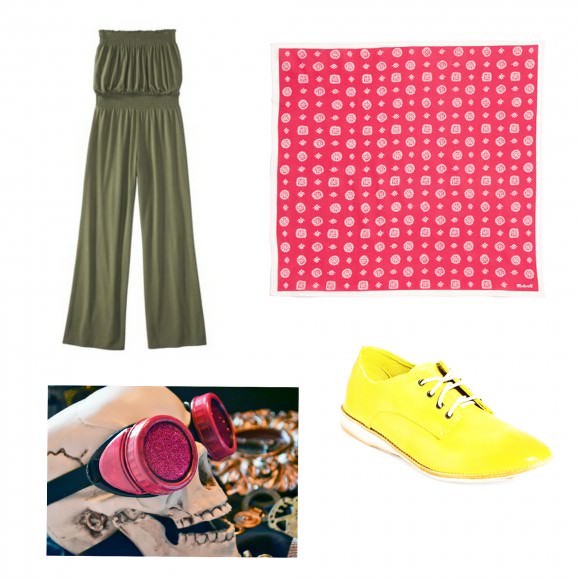 The only bummer I encountered while putting this list together is that there aren’t any major female cereal box characters to emulate. Can you imagine the possibilities? It doesn’t really matter though, as all of the trends these characters wear—military jackets, personalized items, rad shoes, big hats, feathered bangs, dope glasses, capes, bright colors, and signature pieces—aren’t gender specific at all. They’re simply the everyday looks of people (and the occasional tiger) who dare to distinguish themselves through bold outfits and fun accessories—characters who just want to look grrrrreeeeat. ♦