Saying No to FOMO

A roundtable about feeling like everyone’s hanging out without you. 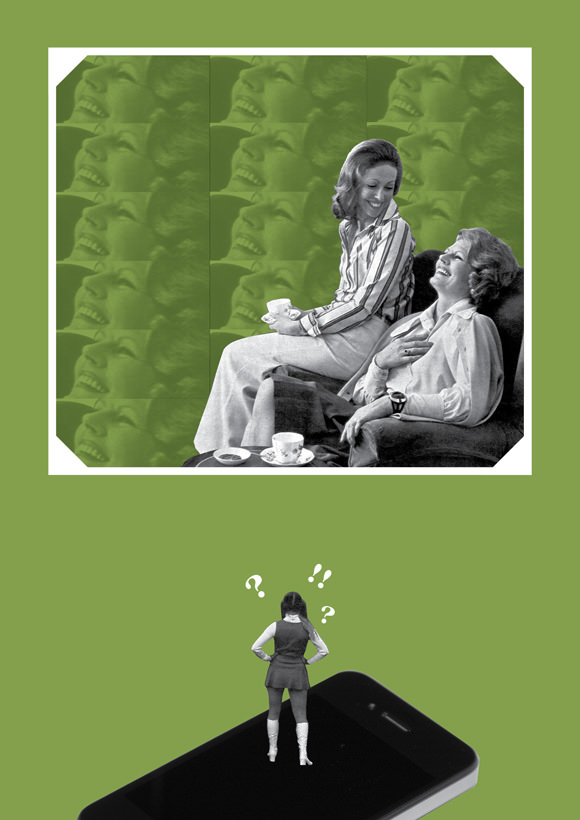 OK, let’s set the scene: It’s a decent, normal Saturday morning. Everything’s fine—in fact, everything is pretty good! You marathon-watched movies last night and you got to sleep in really late. You reach for your phone and start lazily scrolling through Instagram, warm and cozy in your bed. Content. Happy.
And then you see it.

A picture of a whole bunch of people you know, hanging out together. People are dressed to kill and mugging for the camera. Everyone looks like they’re having the time of their lives.

Where even are they. You weren’t invited! And now, even though you were totally happy to stay in and watch movies last night, and perfectly at ease just a second ago, your good mood is ruined. It’s like ice water got poured down your back. You’re hurt no one invited you, afraid that you’ve missed out on something major and fun and life-changing, and certain that missing this cool hangout (that was documented on Instagram for all the world to see) was a grave social mistake.

This horrible feeling you’re experiencing is called “FOMO,” sugarcube. FOMO stands for “Fear of Missing Out.” It’s a newly named social anxiety phenomenon that’s been featured in the media a bit lately. FOMO is so many things. It’s the feeling that you must attend a particular party, even though you’d much rather stay home, because what if this party is the most fun party of the entire year, where stuff so crazy happens that everyone talks of nothing else for months? FOMO is the icy-water feeling of scrolling through Facebook and seeing a bunch of your friends or peers doing something fun without you; it’s the way you feel when you get a Snapchat video that shows two of your good friends doing a Beyonce dance routine at one of their houses…and you weren’t invited, even though you live a block away. FOMO is feeling pressure to go to the same college all your friends are going to, or feeling pressure to go to college at all, even if you don’t want to go, because OMG WHAT WILL YOU BE MISSING, you know? FOMO is being sure that everyone else is having more fun than you, that everyone is doing something cooler than you, that everyone is more successful than you and having a wilder, better youth/life than you. It’s a black hole of suckage and negativity, and a handy acronym that neatly encompasses a huge range of complicated emotions, including feeling left out, envious, hurt, anxious, angry, and unconfident. Awesome.

I wanted to see if other people experienced this fear of missing out in life, so I talked to some Rookie staffers about it. AND SWEET LORD DID THEY WANT TO TALK ABOUT FOMO. Here are just a few things I gleaned from this enlightening conversation:

And because we are all special miracles, we all experience it differently, and at different times! Let’s just be clear, though—FOMO usually feels crappy for everyone.

NAOMI: FOMO is the least productive feeling, because you feel like you’re missing out, but you can’t do anything about it. The missing-out feeling makes you feel uncool and therefore unconfident, which makes it even harder to fight the feeling by doing anything proactive about it. It is an absolute vicious cycle.

JENNY: I think my FOMO is especially bad when I’m trying to be “good” by staying in and working. In college, I would go through bouts of wanting to be a really serious student and turn down every single social event for weeks, but then I’d spend whole nights agonizing about whether or not I was missing out on something instead of studying. I also had horrible FOMO the summer after my junior year of college. I was a community organizer and all my friends had just turned 21. They were going to shows, parties, and bars in San Francisco, and I was interviewing homeless mothers in shelters and giving out clean syringes to teenagers on the street. Even though I knew that later in life I would be glad to have had that experience, at the time all I knew was that all my friends had inside jokes I couldn’t participate in and I had this self-absorbed, nagging fear that I was somehow doing YOUTH wrong…like, why was I wearing a parka and freezing outside with 50-year-old social workers instead of dancing to Swedish pop with cute boys?

LOLA: My experience of FOMO is divided into two types: fear of missing out on a desired experience (“I wiiiish I was doing X but I have to do something else ughh”) vs. fear of missing out on a possible future (“I know I SHOULD be having X experience but I really just want to ____ but then I’ll never _____”). Here’s an example: I get invited to a party. I’d feel that first kind of FOMO if I was supposed to be studying: “Ugh, I want to go to the party but I can’t because I have to stuuuudy why why whyyyy WHY! WHY! WHY!” I’d feel the second kind if I really would just rather be at home: “I know I should be wilding, but I really just want to put on my jim-jams and organize my rock collection, but then I’ll never meet my Future Wife. Ughhh why why whyyyy WHY! WHY! WHY!”

ESTELLE: When I was younger, I had a touch of it: Like, why do other people constantly go out to parties and I don’t? Why are people looking fabulous at some event while I am literally spilling water on myself at home? Ew. FOMO is a sign of not feeling you have control over your life. Because it’s a helpless, crappy kind of feeling—not one you routinely have when you are making meaningful choices that mean you are working towards your goals, even if your goal is to taste every Ben & Jerry’s flavor (I am halfway through).

DANIELLE: When I was in middle school, missing out on things meant something else—it meant you weren’t included in the group, or you somehow didn’t make the list when things were being decided. Finding out people were hanging out without you meant you didn’t belong, and that always hurt.

SUZY: As a teen with strict parents, I missed out on a lot of shows and parties. I tended to blame myself for not being cool enough for my friends, and felt really hurt when they stopped hanging out with me because my mom rarely let me go anywhere.

LAUREN R.: As a kid, I never wanted to go to sleep and miss out on the mysterious things grownups were doing past my bedtime. If you’re a curious person by nature, how can you not wonder about all of the cool shit the rest of humanity is up to?

MARIE: A while back, I was bummed that the friends I introduced would get together and hang without me. It’s not like they didn’t invite me, but I lived far away and couldn’t make it. I just felt left out and like everyone was having fun without me, so it bummed me out. It especially sucks when there are INSIDE JOKES being created without you—and cute Instagram and Facebook pics.