This week, Beyoncé’s go-to video director, Jake Nava, took us be(y)hind the scenes of the videos for “Grown Woman,” “Partition,” and “***Flawless,” a trio of songs that cover Bey’s feminist awakening, her intimate relationship with her husband, and her career as a whole. He talks about the inspiration behind each video, the practical aspects of shooting them, and Bey’s infectious drive to just MAKE GOOD STUFF. “She’s still clearly one of the most interesting and talented artists in the world. No matter what idea I bring to the party, she steps up with as much, if not more, in terms of what she brings to it,” he says. “Grown Woman,” in particular, is one of the coolest videos I’ve ever seen, and I cannot get enough of these precious insights into how Jake and Bey brought it all together. Bitch, she grown!

A group of awesome students from Newtown High School of the Performing Arts in New South Wales, Australia, took a trip to the home base of Australia’s government, where Prime Minister Tony Abbott paid them an obligatory PR visit. The PM let them ask him three questions, but didn’t seem to expect the teens to step up and challenge him. Students questioned some of his more controversial decisions, asking, for example, “Why did you not go ahead with the carbon tax?” and, “Why are you so against legalizing gay marriage?”

After brushing off these queries, which happened to come from female students, he asks for one from “a bloke,” expecting to be asked about football because #boiz. Too bad for him these kids RULE! Watch what happened next in the video above.
Tyler

Maybe, like Brodie, you LOVE “Grown Woman,” but just can’t pick a single favorite Beyoncé track. Well, you’re in luck: Mitch Grassi and Scott Hoying have put together a beautiful medley of every track on Beyoncé’s most recent album, so you’ll never have to choose again!
Leanna 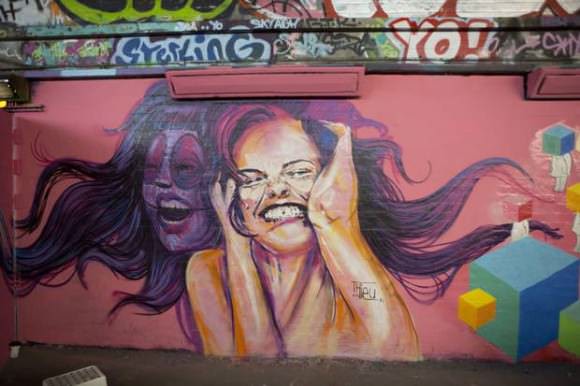 Part of the massive Femme Fierce mural. Photo via the Independent.

A group of over 100 international artists called Femme Fierce has painted a gigantic mural honoring International Women’s Week in London. It’s not official yet, but it looks like they’re going to break the Guinness World Record for largest spray-painted mural. I’m bummed that I can’t see this awesome artistic feat beauty in person, but if you’re in London anytime soon, stop by the Leake Street Tunnel and check it out for yourself.
Julianne

Can I ask a question? If there are any women on my TL who are victims of sexual assault & don't mind sharing something?

Christine Fox encouraged women on Twitter to speak out about what they were wearing when they were sexually assaulted after one of her followers told her that revealing clothing could be a causal factor in rape and sexual violence. The results, which she RT’d with permission, drove the point home that people are assaulted whether they are wearing pajamas, jeans, or short skirts—it’s never the victim’s fault. “I really hope that this opens peoples’ minds that what you are wearing has absolutely nothing to do with whether you are assaulted,” she said in an interview with The Root.

On Thursday, the New York rapper Le1f made his network television debut on the Late Show With David Letterman to promote his new EP, Hey. He performed his bubbly, badass single “Wut” with a band led by Dev Hynes and the producer Boody, and danced in a head-to-toe kilt look by Hood by Air (with Nike snowboard boots, which David Letterman took a special liking to).

Full disclosure: I am biased because Le1f is my real-life good friend, but I thought it was one of the most exciting performances I’d seen on a late-night show in ages. Rap performances often sound thin on TV because the on-set acoustics are unforgiving, but the band more than made up for it, and Le1f showed off the talent and polish that make him a rising star.

Also, it must be noted: Even though it is 2014, for the past two or so years, Le1f has consistently been written about and characterized as a “gay rapper.” We don’t refer to non-gay rappers as “straight rappers,” and Le1f’s sexuality is not the primary thing that defines him! He tweeted yesterday, “thank you so much to @Letterman for inviting me to perform on his stage as a musician and not as a spectacle. that’s major.” It is indeed.
Jessica

Bikini Kill’s drummer, Tobi Vail, posted a page from her 1990 diary on her website yesterday, which chronicles the role of feminism in an early Bikini Kill practice session. It’s a perfect time capsule, and Vail’s enthusiasm for the band and its aspirations as a catalyst for solidarity for other women and oppressed people is inspiring. She notes that she’s psyched that everyone seems to hate the band’s name name and insists, “We’re going to be the most misunderstood band ever,” which is funny because it’s probably true.
Anna F. 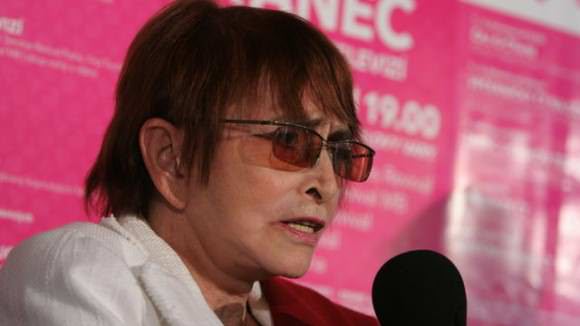 The Czech director Vera Chytilová passed away this week. I’ve only seen one of her films, 1966’s Daisies, but it’s one of my favorites. If you haven’t seen it, it’s an aesthetic masterpiece about two girls, both named Marie, who decide to be bad (and eat a lot of pastries). Rest in peace, Vera. 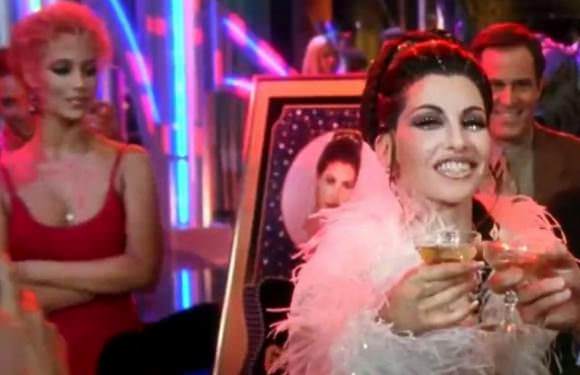 A still from Showgirls via the Awl.

Although I’ve never actually seen the movie, I really enjoyed Haley Mlotek’s 5,000-word piece about Showgirls, which raises some really good questions about taste, criticism, and why we like what we like. 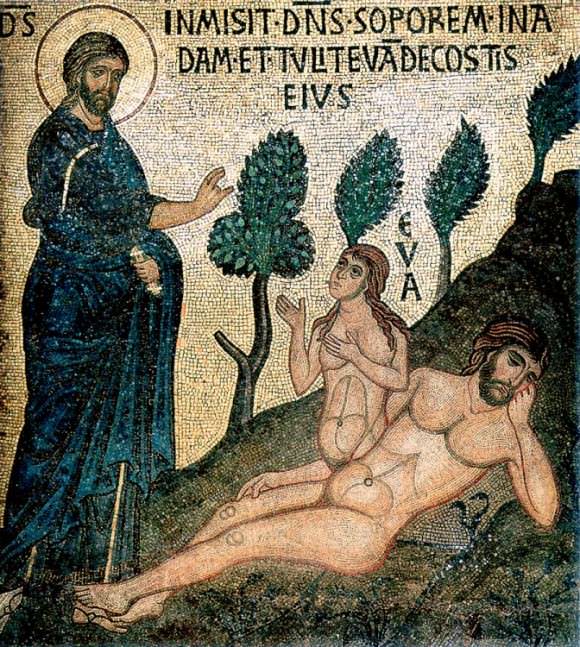 A medieval image of Adam and Eve via the Toast.

I’m so glad I came across this reminder to slow down and TAKE CARE OF YRSELF by Black Girl Dangerous this week. My friends and I are getting closer and closer to graduating from college (YIKES), so everyone is pulling out their hair, drinking pots of coffee at a time, and cringing every time the words adult, job, and even May are uttered. Given these stressful conditions, I really needed to read something advocating a calmer lifestyle and replacing the goal of “being busy” with the goal of being healthy, and this piece totally did the trick.
Estelle 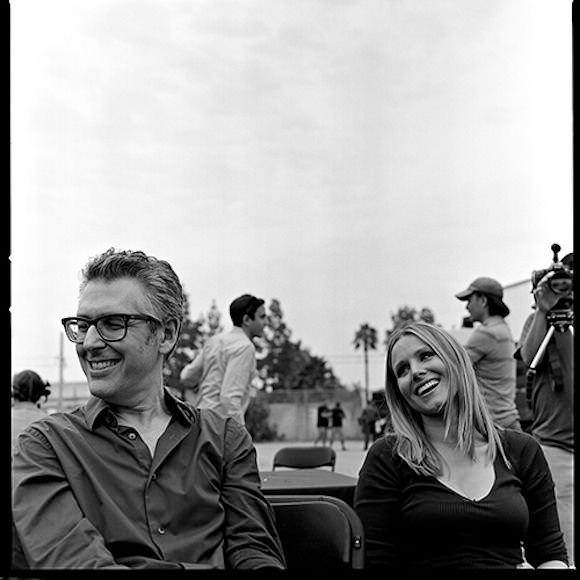 Ira Glass and Kristen Bell being cute as all get-out. Photo via This American Life.

I’m a huge fan of both the girl-detective TV series Veronica Mars and the radio show This American Life, so imagine the puddle of tears that I drowned in when I saw this essay about the day the Veronica Mars movie was filmed IN THE TAL STUDIO, written by the radio show’s host, Ira Glass. ARGHHHHHH. There are also a bunch of adorable photos. ARGHHHHHHHHH.
Suzy X.

Last weekend, Latina women got totally dissed in what was supposed to be a pro-feminist Saturday Night Live sketch. Cecily Strong portrayed an awful caricature of an immigrant Latina, whose strong accent, poor English skills, tropical garb, and marriage to a white men’s-rights activist are made into the butt of the joke, while a bunch of heroic white American women are intent on correcting her ignorance. UGH.

It’s bad enough that the superficial trophy wife and the conniving maid are still the most common representations of Latinas on TV and in film (even if they’re executed with snappy quips by otherwise witty actresses like Sofia Vergara or Eva Longoria). But when white women use these stereotypes as an opportunity to elevate themselves, as in this sketch, it just burns. The self-proclaimed feminists on SNL, a show that doesn’t employ any Latina writers or actresses, should call up some of the many fabulous Latinas in TV and film to play Latina parts, STOP relying on stereotypes, and maybe try reading some Cherrie Moraga.
Caitlin H. 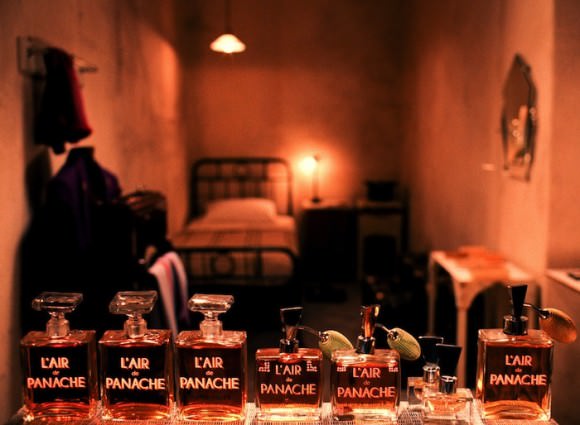 The gorgeous perfumes on display in Wes Anderson’s latest movie, via Papermag.

I am all over this look at the props in The Grand Budapest Hotel, Wes Anderson’s latest film, because one of the best things about his films is his complete attention to detail. I loved finding out who made the beautiful three-tiered mini cakes, the newspapers, and so many of the other pieces of this awesome movie. New dream job: making fake cats for Wes Anderson.

How do you deal with the news of Lorde’s upcoming collaboration with M.A.C. Cosmetics? You don’t. You just keep freaking out until the makeup line actually exists in its bound-to-be-heavenly physical form. According to Lorde’s tweet above, it’ll be on the market this summer, and it’s going to be so rad—I can just feel it!

The photographer Terry Richardson wrote an open letter in response to models’ continued allegations of sexual harassment. “In writing this,” he says in the piece, originally posted on The Huffington Post, “I make a humble attempt at correcting these rumors, because I have come to realize that absent my voice in the conversation, all that remain are the lies.”

To me, this just seems like another attempt by a man in a position of power to shut down voices that threaten to decrease in popularity. Richardson spends some of the post explaining the “sexual nature” of his photography, miscasting the models’ testimonies as foolish, anti-art, lowbrow misunderstandings of his work. He also blames “sloppy journalism fueled by sensationalized, malicious, and manipulative recountings” for the backlash he’s experienced of late, while ignoring the power differential between young models and a famous fashion photographer.

But, as more models speak about their encounters with Richardson, it seems that the allegations made against him, which are nothing new, didn’t just come out of thin air. As we saw in the aftermath of Dylan Farrow’s heart-wrenching story about Woody Allen, Richardson’s essay has prompted a slew of reactions that treat personal accounts of sexual harassment as a matter of opinion. Last time I checked, though, when you’re assaulted or harassed and you tell someone about it, that’s not considered an “opinion.” ♦