Sunday Comic: The Best Song Ever #18

The stunning queen of poise, wisdom, and out-of-this-universe gorgeousness Lupita Nyong’o delivered a glorious testament to self-love and beauty at the Black Women in Hollywood Awards last weekend. She didn’t even need to go win an Oscar the following day to secure a spot in the sky as a sparkling star, but she did it anyway—at last Sunday’s Academy Awards, Lupita earned Best Supporting Actress award for her role in 12 Years a Slave, because, you know, SHE’S A QUEEN.

Her every ounce of being radiates with such unfuckwithable self-awareness that I wish I could bottle, but instead can only strive for achieving myself. Adding this speech to my confidence-building regimen (it’s helpful to keep a bookmark folder of such digital scraps for self-bolstering!) is going to be a wonderful thing.

Someone named Jessie Hill did the world a goddamn service by translating “Drunk in Love” to emoji-lyrics in real time. I demand this video ends up in our collective 2014 time capsule. Beyoncé + emojis = THIS MOMENT, and future generations/species/aliens need to know what was up!
Leanna 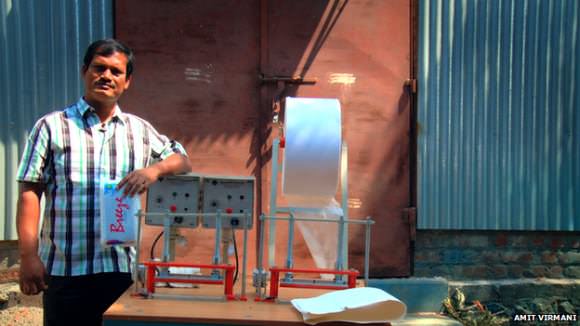 Arunachalam Muruganantham with his amazing invention. Photo by Amit Virmani via BBC News.

After seeing the filthy rags his wife used for pads when she was menstruating, a man in rural India made it easier and cheaper for women in their community to use cleaner menstrual products. Despite the fact that he knew very little about periods himself (the topic is fairly taboo in his culture), he did all he could to seek out information about the menstrual cycle, including asking college women for their used sanitary pads and constructing a makeshift uterus out of a football and goat blood.

His experimentation and data gathering eventually led to the invention of a machine that cheaply and efficiently manufactures and sanitizes pads from raw material, and now his machines are sold to small communities where groups of women and girls use them to create small businesses of their own and educate their communities about menstrual and reproductive health. Despite the opportunity for the machine’s inventor to monetize this invention, he lives modestly with his family, but he’s OK with that because he likes seeing his design improve impoverished communities like his own. And while Muruganantham is excited to spread his innovation to other countries and impoverished areas, he doesn’t think TV advertising is the way to go: “”You always have a girl in white jeans, jumping over a wall,” he says. “They never talk about hygiene.” TOO TRUE. This guy is a hero!
Emma S. 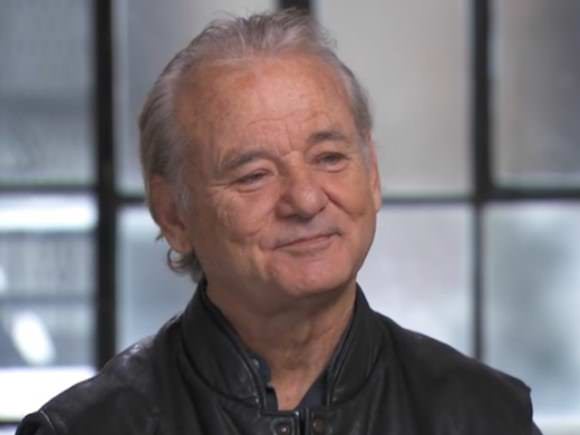 A still of our #1 dude via Splitsider.

Some genius has taken the time to collect Bill Murray’s greatest bons mots. This is like Christmas, Chanukah, and my birthday wrapped up in one giant present! Enjoy.
Gabby 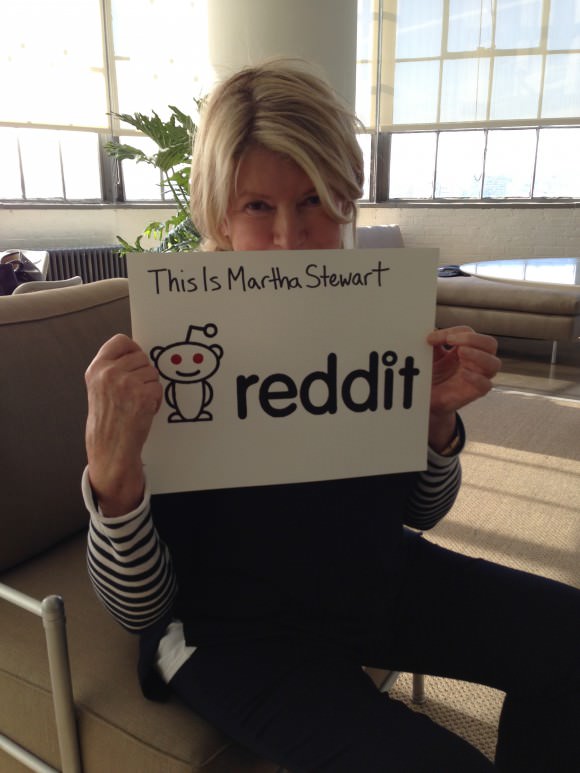 Proof that Martha Stewart is the best by way of Reddit.

This week, living legend and boss bitch Martha Stewart did a Reddit AMA, which means she live-answered questions from users. She revealed that her favorite singer is Pharrell Williams, she considers herself a model, one of her rules is to never be a slave to fashion, she does not think about the past, aaand she wishes she “were closer friends with Snoop Dogg,” among other exciting answers.
Bianca

Before I started writing for Rooks, I bought Rookie Yearbook One and was super stoked that it came with a red flexi-disc which featured Dum Dum Girls. Since then, I’ve followed all that the band does, and this week, DDG released a video for the track “Are You Okay?” from their new album, Too True. It’s so much more than your regular video—the script for the clip was written by the author of American Psycho and Less Than Zero, Bret Easton Ellis, and the result is an 11-minute psychological thriller/short film featuring band member Dee Dee Penny and the actors Shiloh Fernandez and Sophia Marzocchi. YOU NEED TO SEE THIS! 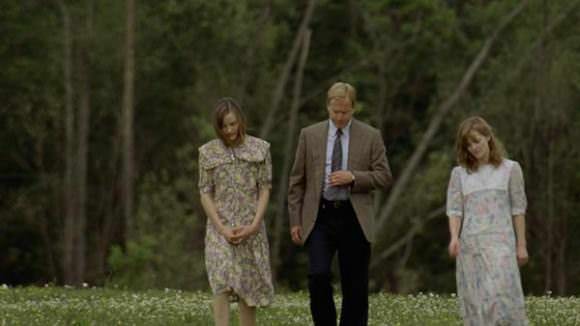 The women (and one dude) of True Detective. Still via the Hairpin.

Like everyone else with a purloined HBO GO password, I am a touch obsessed with True Detective, but its female characters gnaw at me a little. They aren’t full people; they’re shady and symbolic at best. The plot is often driven by their sexual transgressions or purity. And, as in so many other shows and movies, women’s and children’s suffering is always lingered on for just a hair too long, for the sake of being “gritty” and “real.” It’s so fatiguing!

So I loved this convo between Anne Helen Petersen and Susan Elizabeth Shepard, about the female characters on True Detective. Two of my favorite working writers, Petersen and Shepard pick apart some of these same issues with True Detective. As lovers and examiners of pop culture, they also discuss the portrayal of female sexuality and sexual agency in TV and film on the whole.

This point by Shepard really nails my feelings best:

Maybe only women think [female pain in the media is worth talking about], and men are able to see it as so much aesthetics and storytelling, which is a distinct and bleak possibility, and I suppose that’s the most depressing conclusion I could come to; that it’s maybe too close to a reality where a certain amount of suffering is a tangible reality for women and an abstract concept to occasion shows of bravado for men.

My headcanon has always been that, in her spare time, Courtney Love leads some type of all-girl militia that just terrorizes men. Thankfully, Courtney’s guest appearance on Fall Out Boy’s Save and Rock Roll last year has led to her co-starring in one of their new videos, and it’s basically made 1) that headcanon somewhat real and 2) all of my junior high musical fantasies morph into one big, violent, rock ‘n’ roll explosion. I just wish I understood what the plot was for this little music video series FOB has been making to complement the album, but I’m gonna find out—BRB, spending my entire weekend watching ALL OF THEM.
Chanel

You know those times when you just get this overwhelming urge to cry due to a breakup, rejection, or whatever, but you’re in a public place and don’t know what to do? Well, good thing the NYC Crying Guide, where you can find out the best and worst cry spots, exists! Though this Tumblr is kind of funny (“I went to Build-A-Bear in a full on cry mode and I am SO happy I did”), it could make you consider the next public arena you decide to shed your tears. AND YOU KNOW WE’VE ALL BEEN THERE!
Stephanie

Two Mad Men teasers came out this week, and they made me even more excited for the show’s return (and its final season, sob!) next month: the above slo-mo video clip of Don exiting an airplane, plus the totally psychedelic new poster promoting the show. The A.V. Club really nailed their predictions of how the 15-second trailer is going to impact Mad Men’s finale, and, sad as I am to see this series come to an end, I can’t wait to see the trippiness that seems to be in store for us in the final season.
Amy Rose

Earlier this week, we ran a piece about taking a break from the internet, and this li’l article from Teen Vogue about the benefits of spending less time with your phone is a nice companion read. Protect your brainzones, Rookies! Just be sure to come back and visit us every once in a while, ya hear?
Caitlin D. 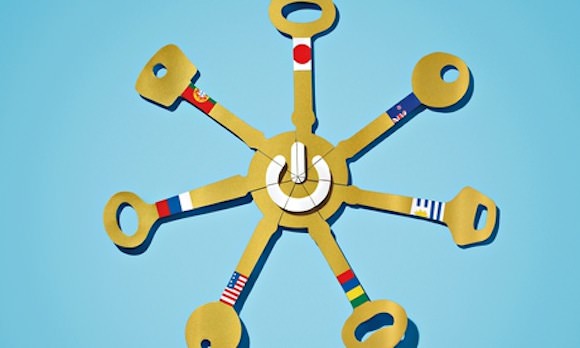 Illustration of the seven keys of the internet (yes, this is real) by Aaron Tilley for the Guardian.

This eyewitness account of a gathering of the folks who keep the internet safe sounds like it was lifted from the opening of a James Bond movie. But, according to the Guardian, “the seven keys” to the internet—which are held by seven different people and come together to make one “master” key that unlocks one of the web’s most central security systems—are a real thing, so we should probably read up on them. Next time, the key holders should probably meet in an inactive volcano crater and wear matching eye patches, jussayin.

San Francisco just became the first big city to ban plastic water bottles! Our Board of Supervisors voted unanimously in support of the plan, which will be rolled out over the next four years. I’m not sure what this means for unannounced bouts of in-transit dry mouth, but I bet Mother Earth is stoked on San Francisco right now. ♦