PINS: Mad for You

Two and a half minutes of surfy post-punk goodness. 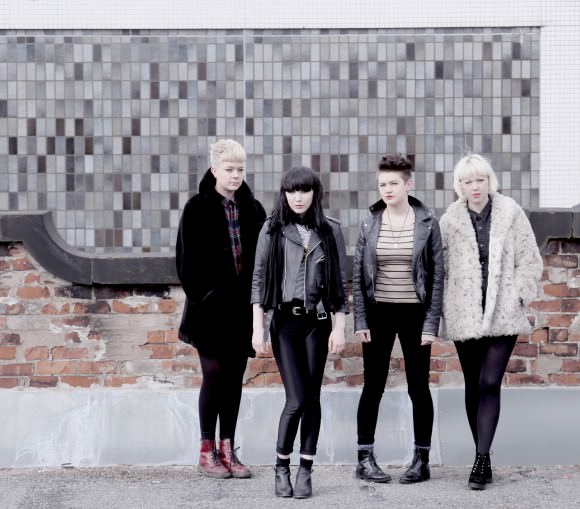 Last year, Manchester’s PINS released Girls Like Us, a dark and seriously addictive collection of post-punk riffs and girl-gang vox. Tomorrow, the album will be released in the U.S. via Bella Union, and we’re psyched to share an early taste with you: This song, “Mad for You,” burns through its restrained tension, classic punk vibes, and surf-y guitars in just two and a half glorious minutes.

There’s a sense of urgency about all of their songs, which makes sense, since they recorded the entire album in one week!

On top making their rad music, the members of PINS also run their own tape label, Haus of Pins, which releases actual cassettes by bands such as September Girls, Abjects, and Female Band.

When I spoke with PINS drummer Sophie Galvin, the band had been touring the UK on and off for a few months and was getting ready to cross the Atlantic to play some shows at SXSW (next week), then in New York and Philly—so naturally I started out by asking how that’s been going.

SOPHIE GALPIN: We’re on our way out of Manchester, to Bellingham. We played there not long ago, and it was a really unexpected highlight of the tour, so we’re excited to go back. We played in London last night, but we had to drive back to Manchester after the gig, so we’re pretty tired today.

You’re usually identified as a “Manchester band.” Did you grow up in Manchester?

The others did, but I didn’t. I came here for university and then stayed because I loved it so much. I’ve from the Midlands, about two and a half hours south of Manchester.

How did the members of PINS all meet? Were you playing in other bands before?

[Singer] Faith [Holgate] started the band and recruited Anna [Donigan], who plays bass. They were gelling for quite a while before the guitarist [Lois McDonald] got involved. They had a drummer called Lara [Williams] for about a year and a bit, then Lara left and I joined. So we’ve been the current lineup for about a year, touring and doing the album. We just met through hanging out in Manchester, it all kind of came together.

When Faith and Anna were making the band, we just kind of wanted to play some shows, but that’s as far as the thought went. Then more and more stuff kept happening. Originally when they put out the first recordings it was on Haus of Pins, self-released. The first single was received really well, and we got signed to Bella Union, which is great. And now Haus of Pins is our label for putting out other bands that we like. We just kind of give bands that are just starting out a bit of a leg up. Especially Manchester bands—if we like them, we will help them put out a cassette. Cassettes are really cheap to release. We put out limited runs.

That rules. Tapes labels are important. So is there a DIY mentality about things in Manchester?

You have to be prepared to do it yourself here, and any help you get is a bonus. In the musical climate we’re in right now, it’s really easy to get your music out there on the internet, but it also means that everyone and anyone can get their music out there. People are less prepared to wade through all of the rubbish to find the good stuff. Sometimes you have to be creative and innovative and be prepared to do the work yourself.

Do you have any advice for someone who might be trying to start their own tape label?

It’s not hard to do—you just have to want to do it. You can make everything happen by yourself. We do all of the design by ourselves, order the tapes, and write the press releases, then we’ll try to get them played on the radio. We just do it all ourselves. It is possible to do that nowadays. It’s not a moneymaking venture, but it sort of runs itself.

There are a lot of really great bands here. It’s really vibrant and very active. There’s something for everyone. It’s very encouraging, and people are always seeing how you’re getting on. It’s a good time to be a band in Manchester, I think. One of the best things about Manchester is there’s a size of venue for every level of band. And some of our friends are in really good bands here: Brown Brogues are a really good Manchester band; so are MONEY.

What are some influences you were all channeling on the new record?

We have different tastes across the band, but there is some crossover. We all really like the Velvet Underground, we take influence from the Beatles, Joy Division, and the Black Lips, in terms of production and how things are recorded.

How was being in the studio?

It was our first experience all together in a studio. We went to a studio in Liverpool—Parr Street Studios. it was really cool. There was a really big room we got to use there, and we could play everything live together in the room. There could be a lot of backing vocals, all of us singing around a couple of mics at the same time, so we could get it really reverberated and echo-y. We only had it for a week, so we really had to smash it. It was pretty rapid.

I like the spoken-word part of the song “Velvet Morning.”

The lyrics were written by Lara, the old drummer. She is a superstar writer. She actually left the band because she wanted to focus on writing; that’s what she’s studying at the moment. We thought it would be nice to use some of her literature on the record. She writes beautiful literature.

Had you been in a band before?

I’ve been in lots of bands, and I’ve done a lot of session work in all styles of bands, playing bass and guitar.

How did you get into session work?

You just have to do as much music as you can, and then it sorts of happens. It’s like any kind of freelancing—you build up your reputation slowly. You just have to be consistent and professional. The more you do, the more people will ask you to do. ♦

Liz Pelly is a writer and editor based in New York. She spends a lot of time organizing shows and editing an online alt weekly, fvckthemedia.com. You can contact her via email, Twitter, or Tumblr.