I totally wanted liposuction—until I got it.

Holiday in the Sun 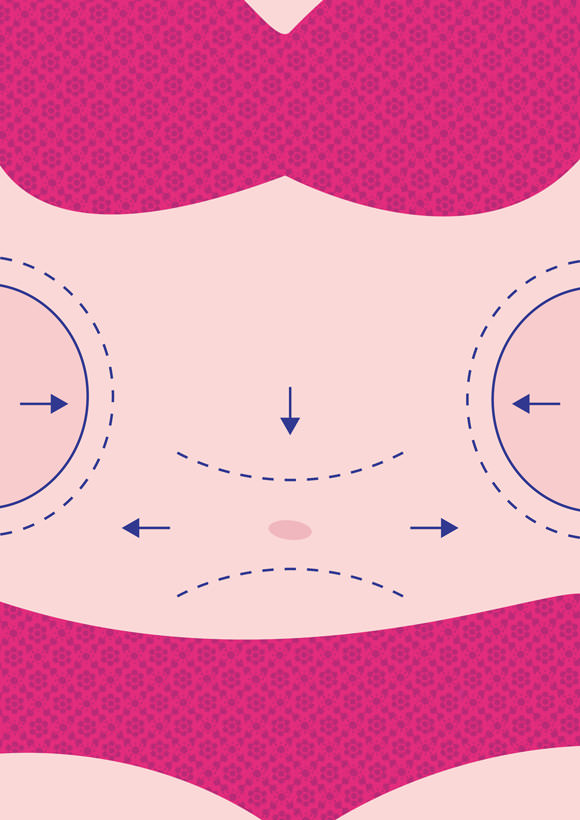 I had liposuction when I was 18 years old. While many people choose to have cosmetic surgery for their own totally valid reasons, my reasons were based in shame. I was fat, and I hated being fat. I hated my body, and I had surgery to get rid of it and replace it with one that wouldn’t embarrass me every time I looked in the mirror or stood on a scale.

That was a decade ago, and this is the first time I’ve told anyone I’m not very close to about my surgery. I’ve been too embarrassed to talk about it, because I feel like I’m supposed to be “above” that kind of body shame. I’m a feminist who is always telling people how beautiful they are at any size or age, in any shape, and I truly believe that all bodies are “good” bodies. So why couldn’t I exercise this kind of acceptance toward myself?

When I look at pictures of four-year-old me wearing shorts, sleeveless tops, and polka-dot bikinis, I try to remember what it was like to not feel fat. My mom has told me that as a baby, I was happiest when I was naked, playing in the sandbox and crawling around the backyard without a care in the world. That’s the only evidence I have that there was ever a time when my body was just a body to me and not a reflection of my inner to me and not a reflection of my inner “goodness,” which boggles my mind, because as far back as I can remember, my inner and outer selves have been so inextricably linked that they feel like they came that way.

The trouble began just before my 10th birthday. My mom took me shopping for a new bathing suit, and in the dressing room, she casually mentioned my “thunder thighs.” I tried to figure out what she meant: Was she saying the earth shook when I walked on it, and it sounded like thunder? When she saw my face, she realized how upset I was and tried to comfort me by assuring me I would outgrow my “baby fat,” but the damage was done. I looked at my body in the full-length mirror, pushed out my stomach, and pinched the flesh around my belly button with my hands. Suddenly everything about my body felt wrong. What was I to do about this? If I stayed the same size, I would obviously be “fat,” which I was old enough to know meant “bad” in my family. And what if I got bigger? The thought filled me with terror, which, along with my “baby” fat, increased as I got older.

My mom continued to bring up—and try, unsuccessfully, to manage—my weight throughout my adolescence, mostly through constant criticism. My dad was around to witness this (at least until my parents divorced when I was 17), but he was silent about, and sometimes complicit in, my mom’s hurtful comments. She was diabetic and, even though she was relatively thin, struggled with her own body image, and she projected her anxieties onto me. When I was 11 or 12, my parents told me they were afraid I would become diabetic too, and they put me on a diet. I wasn’t allowed to eat pizza, chocolate, soda, butter, ice cream, cheese, or basically anything I liked. I was signed up for basketball, soccer, softball, and swim team, all of which I loathed and was terrible at. In desperation, I started secretly hoarding my “forbidden” foods. I would binge on them when no one was around, then immediately beat myself up for doing so.

By the time I was 14, I was eating all the time, whether or not I was hungry. I ate when I was bored, angry, frustrated, or sad, and kept eating until my stomach felt like it was going to explode. I didn’t know how to stop.

Mother-daughter shopping trips, which used to be pleasant experiences, had become almost unbearably painful. On one such outing, when I was 16, we stopped at my favorite plus-size store. I couldn’t find anything I liked that fit me, and I became overwhelmed with frustration. We walked out empty-handed and sat down on a mall bench, where I tried not to cry. That’s when my mom asked if I had ever considered liposuction, the surgery where they basically vacuum fat out of different parts of your body. That knocked the wind out of me, and I started to openly sob.

“Sometimes dieting and exercise don’t improve the parts where you need the most help,” she said, trying to be supportive. She told me that she’d had liposuction herself after giving birth to me—something I hadn’t known before—and that she was happy with the outcome. She advised me to “think about it” and said she’d pay for the surgery as my high school graduation present. Even though her suggestion that I might “need” lipo hurt my feelings, part of me immediately wanted badly to do it. Mom also hated her looks once, but she did something about it, I thought. Maybe I should, too.

My mother didn’t bring lipo up again, but I kept thinking about it. I was ashamed of my body, and it felt like I couldn’t keep my weight down, no matter what I tried. When a friend’s bulimia landed her in the hospital, I didn’t worry about her, I envied her—not only because she was thinner than me, but also because she was getting help. Being fat wasn’t getting me the right kind of attention—I wanted to be worried about and cared for, not criticized and shamed—so I tried going in the other direction, physically. I ate lettuce all day and started smoking cigarettes, which I had heard made people skinny. When I couldn’t control my cravings, I binged on huge amounts of food and then threw it up. Over a few months, I lost significant amounts of weight and gained it all back more than once…and not one person said anything to me about it, as I had hoped they would. I just ended up sad, frustrated, and still fat. I couldn’t handle it anymore.