There was no way to study for what was really testing me.

Friday Playlist: Hanging Out With the Bling Ring 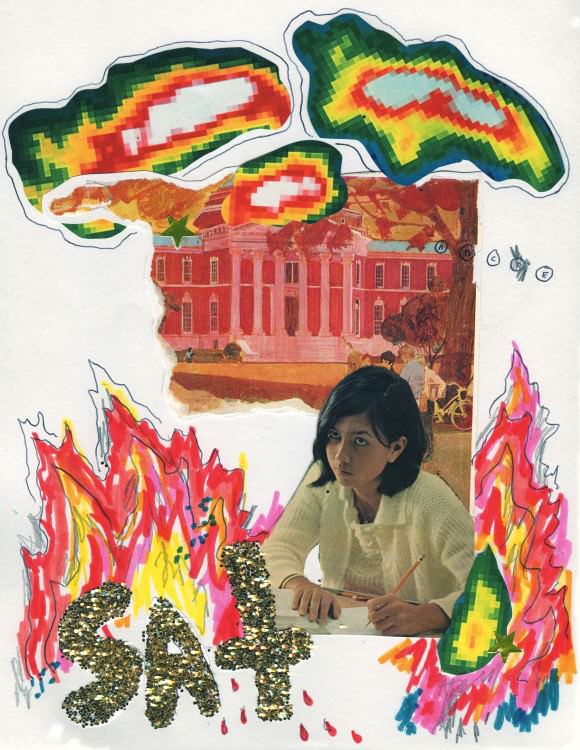 I can’t remember who said this—it could have been the poet Lord Byron, or someone on an infomercial for a hair straightener, or one of the boring presidents, like Franklin von Flurfen or whatever his name was—but there’s a saying stuck in my head that I always go back to whenever I feel like garbage, and I’ve been repeating it to myself an awful lot lately. It goes something like this: Courage is the only compass that will help you cross the sea of uncertainty. Now that I think of it, it probably wasn’t Byron. He would have called the seas “glittering” and then made some other comment that would make me want to make out with his hot ghost face. It was probably that infomercial. People can be very dramatic when they want you to believe in the magic of ceramic frizz-free technology at two in the morning.

Whatever. I’m not surprised I can’t remember where I heard that quote—I can barely remember anything since I started studying for the SATs. I went too hard too fast on the vocab tip, and now there are too many words in my brain. I have to prioritize or die, you know? Like, I can define lugubrious and loquacious no problem, but there are moments—tiny but terrifying moments—when I totally blank on the spelling of, like, cat. Supposedly, if you pour sugar in a car’s gas tank, the car won’t run anymore. Test anxiety is having a similar effect on my brain: Now that it’s in there, the engine is ruined. Maybe someday I’ll be able to salvage the parts and make something pretty out of the wreck.

The test itself is in three days, and I’m pretty sure it’s going to go down like this: I’m going to sit in the lecture hall, pick up my #2 pencil, and spontaneously combust while trying to figure out how far train A has traveled toward Chicago from St. Louis in 6,720 seconds going 85 mph. No one will even flinch as I turn into dust and blow away. Everyone will be too busy trying not to screw up. Someone, I’m sure, will be sweating profusely into a Harvard sweatshirt. At night I fight off visions of a classroom filled with intense eyes that are like daggers pointed at paper, trying to carve out some kind of future through multiple choice.

My parents keep telling me to “take it easy,” which is the kind of thing that people with lives and jobs and degrees can say about high school. They’ve already done the work, and they’ve forgotten everything but the proms and the stupid haircuts and the records they listened to. You never hear any adults sitting around reminiscing about that trig problem they all cried over for three hours on a Tuesday night in March. It’s all, “Enjoy these years while they last!” with adults. Selective memory, I’ve come to believe, is how adults keep their sanity. Without it, they’d all be wandering around the streets, muttering to themselves about Train A and Chicago and the definition of ameliorate.

It’s gotten to the point where my parents are forcing me to stop studying, which is totally embarrassing on several levels. When I broke curfew last week, they demanded to know where I’d been. They actually seemed disappointed when I told them the truth—I was at the library until 30 minutes after closing time, when a very exasperated circulation clerk with keys in her hand told me I had to leave. Then I was at a diner, drinking coffee and working on equations.

“You’re making yourself sick over a test,” my mother said. “You’re going to burn out before you even take it.”

“That’s ludicrous, Mother,” I said. “And, personally, I feel like this discussion is taking a turn for the acrimonious.”

Together, they banned me from studying and demanded that I “socialize and relax,” two words that, I can tell you right now, will NOT be on the vocabulary portion of the SATs. My mother hid my flashcards, my father stole my copy of Test For Success! How to Nail the SATs and Get Into the School of Your Dreams by Dr. Roberta Vensmillow, and they told me it was absolutely mandatory that I spend Friday night with my friends.

“No studying allowed,” my mother insisted, “and you have to have a great time.”

“Your mother and I feel that having a resplendent time will be majorly conducive to your constitution,” added my dad, ever the smartass.

Anyway, that’s how I ended up here, at Friendly’s, watching Kyle Barlow attempt to suck vanilla ice cream up his nose with a straw. Thanks a lot, Mom and Dad. The future looks bright.

Kyle is one of those smart people who go out of their way to act stupid. He thinks it makes him “more approachable” and “less intimidating.” He is a legitimate genius and a total idiot. Barb, our oblivious waitress, is disappointed to learn we aren’t a couple and has just told us that she thinks we’re “adorable and would be perfect together,” which would totally be true if I were a boy or if Kyle were into girls.

Barbara smiles as if she knows better and clears our plates.

“She thinks you’re in love with me,” I tell Kyle. He still has vanilla ice cream residue on the tip of his nose.

“She’s sweet,” Kyle says. “And I do love you, everyone knows.” This much is true: Kyle and I have been inseparable since his family moved next door to mine when we were both three years old. Sometimes fate delivers you a best friend through proximity.

“I can’t believe your parents forced you to go out tonight,” he says, laughing. “That is so sad.”

“I’m going through serious withdrawals right now. Like, all I can think about are my flashcards.”

“That’s maybe the most pathetic thing you’ve ever said, and that’s including the time in fourth grade when you swore you’d never love another band as much as you loved Sugar Ray.”

He shakes his head. “That’s old enough to know better.”

“Yes, well. Some of us weren’t born knowing everything.”

I don’t know why I expect him to understand: Kyle never had to take the SATs. His IQ, which was determined to be 157 when he was two, was enough. He graduated high school when we were 12 and just finished his bachelor’s degree. He’s currently taking a “gap year” so he can just hang out and be 16 before going on to what I’m sure is one of many PhDs.

Barbara returns to the table to drop off our check. “You’ve got a little ice cream on your face, hon,” she says to Kyle, who quickly brings a balled-up napkin from his lap to his nose.

“Thanks,” he mutters through the napkin.

As Barbara leaves the table, Kyle pulls the napkin, which he’d apparently filled with ketchup while I wasn’t paying attention, down from his nose. There’s ketchup everywhere—in the napkin, on his nose, dripping onto his shirt.

“You are demented,” I tell him.

“I’m not the one daydreaming about flashcards,” he says.

Never argue with a genius, dude. They’ll crush you every time.