An ode to my glamorous, snack-obsessed arcade queen.

Ms. Pac-Man isn’t exactly a complex game. It’s based on the super-intimidating spatial challenge of steering a yellow circle (aka Ms. Pac-Man) through a maze of small squares and pixelated snack foods, while avoiding and slaying squiggly-mouthed ghosts, and that’s basically it. But since I became a Ms. Pac-Master four summers ago, it’s been my favorite arcade game of all time. I would go so far as to say I am NASTY good at it, and I don’t ever use that word unless it’s followed by the word gal and I’m telling someone where I got my crop top. When I take my place at a Ms. Pac-Man joystick, all my regular clumsiness is replaced by dexterity, grace, and a hunger for tiny yellow squares (and the occasional bonus pretzel or fruit) that come together in one beauty-marked, hair-ribbon-wearing, sunshine-colored heroine with whom I feel entirely at one. 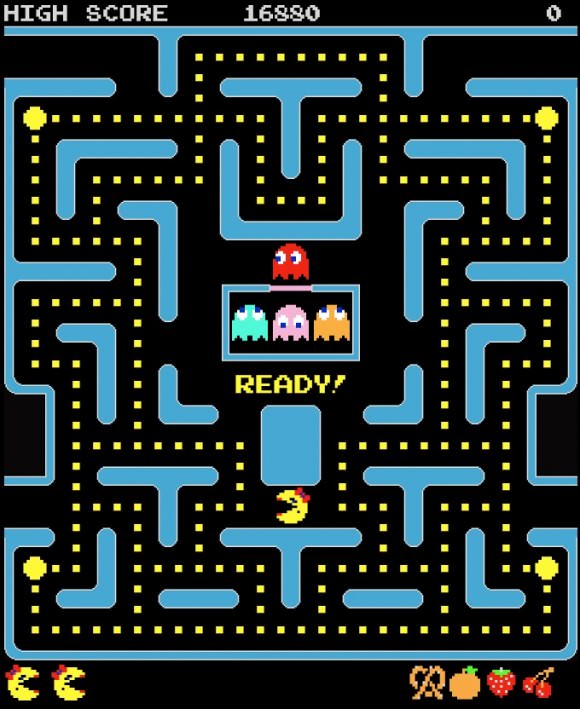 This is what a Ms. Pac-Man screen looks like. Via Google Play.

For the uninitiated: Ms. Pac-Man, first released in 1982, is the hugely successful sequel to the original Pac-Man. Although the gameplay in Ms. P-M varies only slightly from male-gendered first version’s (in both games, you’re speeding through mazes that get increasingly harder to survive as you ascend through the levels, but in Ms., there are warp tunnels), the charming nuances of Ms. Pac-Man’s personality and presentation are a force. Her froggy little chomping noises, aforementioned stylistic affectations, and general je ne sais quoi make playing the dudely incarnation feel as though something is missing, and that something (or someone) is a certain lady in a red bow.

I became a Ms. Pac-Man expert not at an arcade, but in an astoundingly tacky New Jersey mansion that I came into temporary possession of thanks to the misplaced trust of this one dummy (let’s call him Gene, which feels appropriately nebbish for a person whose favorite hobbies were describing himself as a “philosopher,” smoking pot with needlessly convoluted names like “Steel Breeze” and “Tarantula Kush,” and getting defensive about his dreadlocks, that most iconic of clueless-white-douche hairstyles). Gene drummed in a band that my boyfriend was in at the time, and one night after a show, Gene instructed my dude that he didn’t want to take his drum kit home that night, lest he wake his parents, with whom he was embarking on a lengthy island cruise in the morning. Could we hold on to the drums and drop them off while they were away? My beau said sure, Gene gave us the keys to his house, and that was that.

We intended to dispatch the drums the next day and return straightaway to our regular business of playing lazy rounds of Frisbee. But when we unlocked Gene’s door, we discovered a teen-pothead Valhalla. The house had THREE refrigerators, an extensively stocked bar, all manner of expensive instruments (including a goddamn theremin, complicated bongs, a pinball machine, and, best of all, a MS. PAC-MAN TABLETOP UNIT. And we were holding the keys to this deserted utopia. We silently agreed that we’d be manning the fort until Gene and his family returned.

As my boyfriend poked around the house’s 10 bersquillion rooms, each with its own innovative animal-print-based design scheme, I walked over to the Ms. Pac-Man machine, plugged it in, and, for the most part, remained at that position for the next 14 days. After waking up in the master bedroom each morning, I’d return to the game and spend the rest of the day having chicken fights with digital ghosts, chasing cherries and bananas, and climbing up through new levels with each round I played. My newfound love for Ms. Pac-Man consumed me as the days passed. I kept playing, fueled only on frozen mini crab cakes from a fridge that seemed reserved exclusively for hors d’oeuvres. Given the game’s snack-themed plot, it felt appropriate to be wolfing down finger foods as I set out on my quest for eight-bit greatness. 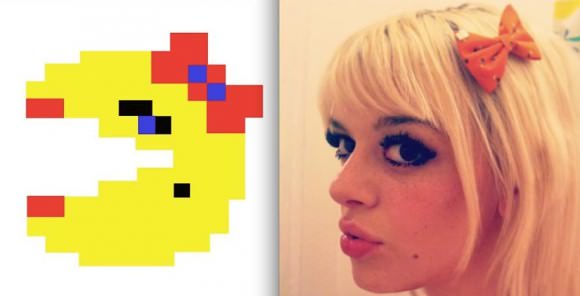 Needless to say, I basically forgot all about the theremin, and I don’t think I ever picked up a Frisbee again—there was a new circle-based pastime in town, one that didn’t require me to shamefacedly skulk into woods that I had accidentally flung a discus into. When I communed with Ms. Pac-Man, my physical awkwardness was a thing of the past. My coordination and control became so fluid that I was no longer playing Ms. Pac-Man—I was Ms. Pac-Man. It was a truly divine feeling to finally compete at something with elegance and skill. (And Ms. Pac-Man is elegant as fuck—check that bow again and try to tell me otherwise.) I had only to perfect the simplest of gestures to feel like a nimble, capable pro, since Ms. Pac-Man doesn’t jump, attack, or really do much of anything but CHOMP CHOMP CHOMP, and all you have to do is flick the joystick to and fro to help her on that noble mission. Still, though, this game is tough! It starts slowly, but after just a few screens, your spooky enemies become faster and less willing to let you murk them, making it all the more satisfying when you do.

If you decide to embark on the sometimes difficult but always captivating journey toward becoming NASTY at Ms. Pac-Man, you’ll discover something really heartwarming as you get better at it: Ms. Pac-Man, at its core, is a love story. I’m aware that it’s super dumb and kind of insulting to suggest that just because an arcade game is presented as a “female” version, it has to be about MUSHY STUFF. But, unfortunately for my politics, I’m really an unflaggingly sappy and heart-motivated individual underneath my cold, vicious exterior (god, I wish), so the romance between Madame and Monsieur Pac is one of my favorite things. The game’s narrative arc follows our determined protagonist as she meets-cute, pairs off with, and utterly falls for a mysterious, debonair circle-thing who’s caught her eye (this would be the original Pac-Man).

After you’ve beaten a few levels, you’re rewarded with a cut scene, shown above, portraying a vignette from this most classic of romances. In the game, you can only see this relationship blossom into a deep, permanent thing if you work really exhaustively at bettering yourself. You start thinking about how that’s a little bit like how you already try to love people, and you get sad for a minute, and then you go back to brutalizing the ghosts who are chasing you down while you’re just trying to make it through life, be with the one you love, and maybe eat a goddamn snack every once in a while. Ms. Pac-Man just gets me!

You can try playing for free here to see if Ms. Pac-Man echoes in the deepest wellsprings of your very personhood, too—although I maintain that this is a game best learned the old-fashioned way, e.g., fake-squatting in the family manse of a bro you hate, or at least on an actual arcade cabinet. So get yourself some quarters and go scarf down some restless spirits of your own. ♦