Stream the first release from a new label devoted entirely to female artistes. 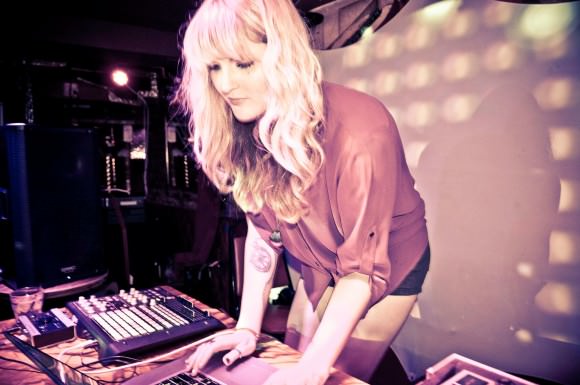 Before Kate Ellwanger became the recording artist known as dot, she was a college student. Her introduction to electronic music came through a favorite teacher, and she immediately tuned in to its vast creative possibilities. Soon she was taking part of weekly beat cyphers, interning at a record label, and, most recently, starting one of her own—Unspeakable Records—which came expressly out of her desire to foster the work of other female producers. She explained the motivation for Unspeakable on her website last month:

The truth of the matter is that nothing in the music industry (or society) is going to change if we don’t have the courage to talk about it. Why is Forbes’s list of [the] highest-paid DJs last year all men? Why do women only make up 10 percent of performers at music festivals around the world? Why is there the automatic assumption that a guy made whatever track you’re listening to, or that if you’re a “female producer/DJ” you probably have someone else making the music for you? Why has technology been gendered as masculine over the course of the 20th century? […] There are so many talented female artists in the business who deserve much more respect than they’re currently being given, which is why I’m creating this platform for women to share their music with the world.

The debut compilation that we are debuting today, Unspeakable Volume One, which includes artists we love (like Natasha Kmeto), is Kate’s way of starting this conversation, with an all-female release on an all-female label.

BRITTANY: Why was it so important to have your new label, and this comp, be all female?

KATE ELLWANGER: For the longest time, I hated being labeled a “female producer”. I just want to be a producer! I just wanted to be judged for my music, not for my gender or my outward appearance. If we don’t talk about these issues and about the sexism in the industry, they’re not going to go away. We can’t just bury our heads in the sand and pretend that these problems don’t exist and they’ll just disappear. We have to have a conversation about them.

I had a show once where the promoter didn’t know I was female—he thought a guy was going to be playing. So when I walked in, they thought I was someone’s girlfriend and he started giving me all this crap. But there are other times where you just feel the love and support from the audience, and [the sexist stuff] is not even an issue. I also get the most wonderful messages from girls who say that they also want to get into producing. I want to do the most to support them and help them in any way that I can to get their careers off the ground.

And, to be honest, there is a way in which being female does impact my music! As an artist, my goal is to express my experience through my work, and being female is a huge part of that experience. It would be kind of ridiculous to deny that that doesn’t have some effect on the music that I make. I know so many incredibly creative and strong female artists who are facing some of the same challenges with sexism in the industry. It’s less about excluding men and much more about bringing women together. I just wanted to create a platform for us to release music on. It’s about strong women being creative.

How did you get into producing?

I actually started to go to school to study voice and become an opera singer! Eventually I took some classes in composition and music technology, and I ended up taking a class with [the producer] Steve Nalepa [at Chapman University in Orange County], who introduced me to a lot of electronic music and [the label] Alpha Pup Records. He also suggested that I apply to an internship there. I got the internship, then one thing led to another, and pretty soon I was producing music by myself in my college dorm room!

I started taking piano lessons when I was about six years old, and I was always really involved in music growing up. I started voice lessons in middle school—I had really supportive teachers who encouraged that route just because I had a mature voice for my age. When I got to college, I developed this new fascination with instrumental music and wanted to pursue that.

You’re the only female member of the beat cypher TeamSupreme. What’s that been like?

They treat me with the utmost respect. I certainly don’t get treated any differently just because I’m a girl. We really push one another to put out our best possible work.

In the blog post where you introduced the compilation that we’re premiering today, you speak very explicitly about the gender gap for DJs. It’s so blatant when you look at the producers of a lot of EDM and Top 40 hits who headline all the festivals and get all of the recognition.

Yeah, there’s definitely a huge discrepancy. It’s changing, certainly. There’s a lot more awesome, awesome female artists coming out on the scene, getting more involved in the music. It warms my heart! I’m so excited to see that, but still there’s this discrepancy. In the past year or so, I think 10 percent of performers at music festivals were female, which is strange to me. I’m not sure entirely why that is. Maybe it’s because technology has been gendered as male throughout the 20th century.

Tell me about the curation process for Unspeakable Volume One.

Some of the artists I actually know personally, just through the music community in L.A. Really what I did was I sat down one day and wrote out a huge list of female artists that I’ve been inspired by in the past and then just reached out to as many people as I could to see who would be interested in participating. Everyone has been overwhelmingly positive! I’ve gotten some little comments and things on the internet from whatever random people saying, “That’s sexist! You started an all-female label!” Like, no, that’s not the place that I’m coming from! There are so many labels out there that are only men, why is that not an issue? I’m just trying to balance it out a little.

Do you have any advice for young women out there who may be feeling a little disenchanted because of the lack of women being represented in dance music outside of your great new label?

I would just say, don’t feel put off or intimidated by it. It is very much a boys’ club, but a lot of this software is really accessible. It’s really inexpensive to get started. Go online, check out tutorials for Ableton, or whatever software you want to use. You just have to seek it out and do it yourself. Don’t feel put off that it’s mainly dudes, because there are a lot of women doing this. Don’t be afraid to reach out to your favorite artists for production tips or info on the industry. I do my best to respond to every genuine email that I receive, so you can always give me a holler at [email protected]. Start with a smaller project like an EP or a mix, put it up on Soundcloud or Bandcamp, and you may be surprised by the results. Let’s show them who’s really running things! ♦