A premiere of a song that’s perfect for bedroom dancing.

The Art of Waiting 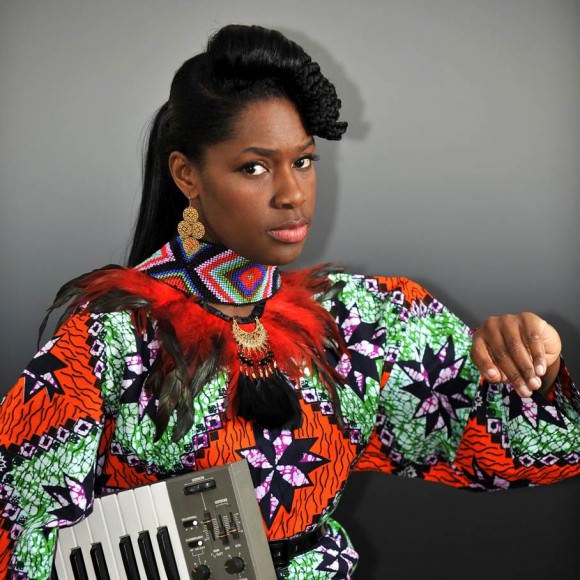 One of my favorite albums I’ve heard all year is Ibibio Sound Machine’s self-titled debut, which comes out next week on Soundway Records. Combining funk, disco, and no wave with traditional Nigerian genres like highlife and Afrobeat, the London-based nine-piece band delves far down into deep futuristic grooves. The Ibibio part comes from the name of the southeastern-Nigerian language in which Eno Williams sings; her lyrics come from traditional folktales her family told her when she was growing up in Nigeria, like one about a peacock who learns to be himself without caring what anyone else thinks, and another about a boy who learns how to be independent from the father he loves. (If you don’t speak Ibibio, which I don’t, Williams has kindly translated and explains the songs in the album’s liner notes.)

We are so happy to premiere a remix of “Let’s Dance (Yak Inek Unek),” a sunny song that will get you dancing in your bedroom:

I spoke with Williams, who is the loveliest and most charming woman, over Skype as she was getting ready to go out last Friday night.

JULIANNE: How did you come up with the idea for the band?

ENO WILLIAMS: The project was really started by myself and my friends [the producers] Max [Grunhard], Leon [Brichard], and Benji [Bouton]. Myself and Max have been friends for a long time, and we’d been discussing the idea of making a record using my mother tongue, Ibibio. The Ibibio language is actually from the southeastern part of Nigeria, and we were talking about the fact that the language had not been documented very much musically, and that it would be very interesting to try something using that as a starting point. We experimented a bit with folktales and stories that were told to me when I was little. Max, Leon, and Benji put together the rhythm-section ideas, I came up with the vocal parts with the folktales, and as we progressed, the percussion [provided by] Anselmo Netto and [Alfred] Kari Bannerman’s guitar became instrumental in finding the sound we were looking for. We wanted something that sounded up-to-date, but also looked back to the sounds of yesteryear, and that combined African music and Western music like funk and disco, which I really liked growing up. In London, we’ve got so many different influences, so many different cultures. Even just in the band, we’ve got so many different backgrounds—Nigerian, Ghanaian, Brazilian, French, English, and Australian. That could only have happened with the vibe in London being so culturally multifaceted and multidimensional.

I love the folk elements. Can you say more about the motivation for preserving those stories, and to sing in Ibibio?

It’s funny, because I used to sing with my sister back in Nigeria—I was born in London, but I grew up in Nigeria. We used to sing little things here and there and crack up because the language is so rhythmic. But I thought that one day I would stop joking about it and really sing songs in Ibibio, because no one else was really doing it. Music is just storytelling anyway, and a lot of the stories I was told growing up were always so vivid and fresh in my mind. We started playing around with the cracked-back tortoise story (“The Tortoise/Nsaha Edem Ikit,” about a cunning tortoise who outsmarts a king). I told the story to the guys, and they were really laughing and falling on the floor. I started singing it and that came along, and I thought, Well, I’ve got quite a few stories, so I just started ringing them up. It started with the cultural preservation element of it, and the music came so naturally, giving a fresh sound to stories that have never been used or performed in the modern sense.

My favorite song on the album is “The Talking Fish” (“Asem Usem Iyak”), about a fish caught in a pond that can talk and who captivates a village.

I love that one too! My mum loved it so much, and when she heard the song she nearly fell off her chair laughing, like, “Really? Who would have thought a talking fish could make it into a song?” [Laughs] I think it’s the most surprising, because the little kid is like, “What the heck, this is kind of amazing!” and then of course everyone in the village says, “Ooh, a talking fish—yeah, we can’t really eat that one, can we?” It becomes an attraction, so everyone has to come to the village to see the talking fish, like, “Ah, a freak of nature!” That story must have been such a source of entertainment.

In the liner notes, you said “The Talking Fish” is a “folktale told to me by elders on moonlit nights while in the countryside as a child.” It sounds so idyllic.

One thing I remember is that every Christmas, we used to go out to the country to visit old relatives, and they always had these really cool stories. The traditional way to do things was to tell these tales by moonlight, so when the kids from the city came over, it was a cool thing to get to the village as soon as possible because the elders were going to be telling stories—the uncles were gonna be cracking jokes, it was a time of gathering and bringing people together. I’ve always remembered those days and wished we could re-create them, but of course we’re all grown up now. But by putting these African tales in our music, we’re sort of passing on that message, like, This is what it used to be like, these are the stories we were told.

The record has references to your mother and your grandmother, too. Are there are a lot of strong women in your family?

Oh yeah, there are really strong women in my family. There’s a song talking about a woman of substance, and I reference my grandmother and my mother as well as my aunties and my cousins. They were really women who just supported and advised you and really just kind of taught you that no matter what, you can become whoever, whatever [you want]. You can be yourself, you can reach for the stars, you can do whatever you set your mind to.

Your music seems really positive—there’s a lot about keeping it moving and stuff like that. Does that reflect your life philosophy?

Yes. Obviously, life deals you very different things, but I’m very much someone who tries to stay positive and to stay happy and just to stay upbeat. Life is not all hunky-dory and rosy, but regardless of whatever, I try to look on the bright side.

Did you always play music?

As far back as 1995 in Nigeria, I used to sing with my little sister in a quintet. We’d do local church gatherings, and just sing around the house. I studied accounting at university [in London], but in the background I was always still doing music: with local bands and in the local choir, working as a session musician, touring with musical-theater tours, traveling the world. Finally, it was kind of time to do something more original. It was time to put pen to paper regarding the whole Ibibio project.

Yes! While I was doing Western musical tours, acting and singing.

So you’re multitalented and you can do your taxes, too.

Well, unfortunately, I still need an acccountant just to make sure I do it right! [Laughs]

I guess it’s good you started singing then! Did you always like performing?

Growing up, I was so shy—the shyest kid in the class. I didn’t really talk to people. I was in my own little world. But I looked out for my siblings a lot—if anyone came near them, I’d be a lion. I battled the shyness with music. I joined local school bands, and every now and then we’d have an entertainment night where I’d dance, sing, and act, and that was my escape. I kind of grew out of [my shyness] and became more open, chatty, and friendly, making friends and being more lively.

It’s a leap from being shy to being in musical theater!

I guess I knew that I couldn’t hide for too long. I just had to fly like a bird and get out there.

You could put that in a song!